“Very powerful evil forces” are zeroing in on film festivals that schedule screenings of the *VAXXED documentary. VAXXED reveals the confession of a CDC scientist/whistleblower who dared tell the truth about vaccine science fraud at the highest levels of government and science. (*You can view the trailer at the bottom of this post.)

In the post below, Censorship in the form of criminal extortion, has hit the Festival organizers in Houston, Texas forcing them to pull the film.

So now we have Big Pharma and the Pro-Vaxers in government using their the official template of Bullying tactics to close down free speech and freedom of choice.

If you have an opportunity to see or support VAXXED in any way do so. Let’s make it Number 1 as Viewed, Not Number 1 as the most censored film of this year. (CW)

The following letter was sent to Philippe Diaz, Chairman of  Cinema Libre, Distributor of Vaxxed: From Coverup To Catastrophe, on April 5, at 8:56 am. The situation has now apparently escalated to criminal conduct and extortion. We urge all media to investigate immediately.

I wanted you to know that just like DeNiro and Tribeca, we must withdraw our invitation to screen VAXXED! It has been cancelled, and there was no press release about the film… that was scheduled for today, but after very threatening calls late yesterday (Monday) from high Houston Government officials (the first and only time they have ever called in 49 years) – we had no choice but to drop the film. Heavy handed censorship, to say the least… they both threatened severe action against the festival if we showed it, so it is out. Their actions would have cost us more than $100,000 in grants.

I do hope that they did not call or threaten you. It is done, it is out and we have been censored… There are some very powerful forces against this project. It does seem a bit of overkill, as I am confident that it will be released Online soon and millions of people can see it.

About Celia Farber: She is a journalist, author, and editor based in New York City, who grew up in Sweden and New York City. Farber has written on a variety of subjects for Harper’s, Rolling Stone, Esquire, The New York Observer, and many more. In 2008, Celia Farber won the Semmelweis International Society’s Clean Hands Award For Investigative Journalism, and is the author of “Serious Adverse Events: An Uncensored History of AIDS.” (MHP/Random House, 2006.) 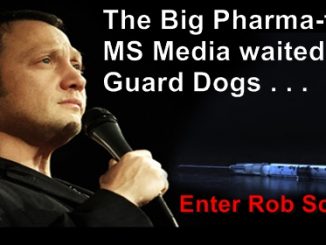 The Uncensored Truth About Mandatory Vaccines According to Rob Schneider