I recently attended the annual Allergy & Free from Show in London. The show is the largest show of its kind in the UK, with over three hundred exhibitors, displaying everything from wheat-free biscuits to allergen-free mattresses.

There were a vast number of exhibitors, exhibiting an array of produce for wheat-free, gluten-free, egg-free, dairy-free, soya-free and nut-free diets, and after attending a number of lectures on food allergies, I began to question what was behind the rapidly growing problem of severe food allergies.

The exhibitors informed me that the number of people who suffer from food allergies has grown to an all-time high, with at least one in five people in Britain suffering from a food allergy or food intolerance. Interested in their comments, I asked them what they believed was causing this massive increase. Although many were reluctant to answer my questions, a few people told me that they believed that environmental factors were at the root of the problem.

Intrigued, I asked them whether or not they believed the large number of childhood vaccinations could be to blame for the increase. Although a few did believe that this was a possibility, none of them wanted to be interviewed on the topic.

The Difference Between a Food Allergy and a Food Intolerance

A food allergy usually happens rapidly, within a few minutes of eating a particular food substance. The reaction is often very severe and in some cases can cause the sufferer to die. [1]

Food intolerance is very different. A person is classified as having food intolerance if they are hypersensitive to a particular food substance. The onset of the symptoms is a lot slower and less severe than those of an allergy and the sufferer can usually tolerate a reasonable amount of the offending food before the reaction occurs. [2]

Professionals Unafraid to Speak Out About Vaccinations

Unlike the exhibitors, there are some professionals who are unafraid of voicing their opinions on vaccinations and food allergies.

Community contributor Barbara Feick Gregory is a woman who is unafraid of speaking out. To ascertain whether or not vaccinations were responsible for the massive increase in food allergies, she decided to compile a major study of Internet resources, patents, medical studies, allergy sites, allergy discussions, vaccination information sites (both pro and con), animal studies, veterinary websites, vaccine package inserts, etc., and explain what correlations she had discovered.

When she began researching the subject of peanut allergies, she discovered that in 1960, when children were receiving as few as two vaccinations peanut allergies were extremely rare. However, by 1997, the number of young children suffering from peanut allergies in the US had risen to 1 in 250. By 2002, this number had doubled to 1 in 125.

Shocked by what she had discovered, Ms. Gregory began to study each country in turn. She wrote, “Food allergies have become a major problem in industrialized countries,” and shared the following statistics from countries around the world:

After completing her study, she came to the following conclusions:

“Vaccines are the main cause of food allergies. The first allergy in children is casein (milk) allergy due to the casein and aluminum adjuvant in the DTaP – Diphtheria, tetanus and pertussis (whooping cough) shot which is often given at 2-3 months of age. Since all babies are fed milk in some form immediately, this is the first allergy to be recognized.

The next allergy to usually show up at about 3 months of age is soy allergy due to the soy peptone broth and aluminum adjuvant in the Pneumococcal Conjugate vaccine given at approximately 2 months of age. Since soy formula is frequently fed to infants, this allergy also shows up early.

Peanut and nut allergies have shown up as early as 6 months of age in children. Peanut oil is a common trade secret ingredient in vaccine adjuvants. Some manufacturers rely more predominantly on other oils in the vaccines – sesame oil in the vaccines used in Israel and parts of Europe or fish oil which is used in the Scandinavian countries.

At 6 months of age, children can have had as many as 16 vaccinations several of which can contain mixed oils in the vaccine adjuvant. Many different food oils can be used in the vaccine adjuvant and even more foods used in the culture medium. These ingredients do not have to appear on the package insert because they are considered “inactive” and are a protected trade secret.

Most physicians do not know that all of the ingredients do not appear on the package insert. Vaccines are not identical from batch to batch or even from dose to dose. The food protein remaining from the oils in the adjuvant or the culture medium varies which is why all the children getting vaccinated from a particular batch of vaccine may not all get the same food allergies.” [3] [4]

Her study is certainly very interesting and extremely well researched, but is she correct?

Dr. Tim O’Shea has also studied food allergies and vaccination in depth. He, too, discovered that before 1900, peanut allergies were unheard of, whereas today, as many as 1.5 million children in the US are allergic to peanuts.

In an article titled Vaccines and the Peanut Allergy Epidemic, he wrote:

“The big change came with vaccines. Peanut oils were introduced as vaccine excipients in the mid 1960s. An article appeared in the NY Times on 18 Sept, 1964 that would never be printed today. The author described how a newly patented ingredient containing peanut oil was added as an adjuvant to a new flu vaccine, in order to prolong the “immunity.” The oil was reported to act as a time release capsule, and theoretically enhanced the vaccine’s strength. Same mechanism as with penicillin.

That new excipient, though not approved in the US, became the model for subsequent vaccines.” [5]

In other words, peanut oil was never approved as a safe ingredient for vaccinations, but the pharmaceutical industry decided to use it anyway.

What Has Peanut Oil in Vaccination Got to do with Peanut Allergies?

According to Dr. O’Shea, by 1980, peanut oil was considered to be an adjuvant – a substance able to increase reactivity to the vaccine. He wrote:

“The pretense here is that the stronger the allergic response to the vaccine, the greater will be the immunity that is conferred. This fundamental error is consistent throughout vaccine literature of the past century.”

“Why was peanut allergy so violent? Adjuvant pioneer Maurice Hilleman claimed peanut oil adjuvants had all protein removed by refining. The FDA disagreed. They said some peanut protein traces would always persist – that even the most refined peanut oils still contained some traces of intact peanut proteins. This was the reason doctors were directed to inject vaccines intramuscular rather than intravenous – a greater chance of absorption of intact proteins, less chance of reaction.

But all their secret research obviously wasn’t enough to prevent sensitivity. Mother Nature bats last: no intact proteins in the body. 60 million years of Natural Selection didn’t create the mammalian immune system for nothing. Put intact proteins, peanut or whatever, for any imagined reason into the human system and the inflammatory response will fire. And since the goal of oil emulsion adjuvants was to prolong reactivity in the first place – the notion of time-release – this led to sensitization.” [5]

What he is saying is this – if you vaccinate a child with an intact protein, an inflammatory response will take place. This is because the protein will eventually invade the bloodstream and when it does, the body sees this protein as a threat and therefore sets up a defense mechanism to include antibodies. When an antibody is exposed to a protein, it triggers a release of histamine. The histamine in turn causes an inflammation, which leads to a sensitivity to that protein. This is a naturally occurring chain reaction of events. [6]

The Terms Allergy and Anaphylaxis Were Created to Describe Vaccine Reactions

In fact, according to SmartVax.com, the terms allergy and anaphylaxis were created by pediatrician Clemens von Pirque and Dr. Charles Richet to describe adverse reactions to vaccines.

SmartVax.com explains that during the late 1800s people began to fall ill after receiving the diptheria vaccine. Dr. Clemens von Pirque began to study this illness at detail in a bid to discover what was causing their illness.

“Austrian pediatrician Clemens von Pirquet studied the illness at length and observed that the symptoms of this sickness resembled those in people who were hypersensitive to pollens and bee stings. To better describe this ‘altered reactivity’ to the sera he created the Latin derived word allergy in 1906.”

In 1901, Dr. Charles Richet found similar reactions when he tried to vaccinate dogs against jellyfish stings. He reported that the dogs had a very violent reaction after receiving the second vaccine, killing them within minutes. Dr. Richet decided to name the reaction ana-phylaxis the Latin term for anti-protection.

“Richet experimented further. He quickly discovered that any protein including food proteins injected into the bloodstream results in sensitization and anaphylaxis on subsequent exposure to the food. Richet injected minute quantities of milk and meat proteins into cats, rabbits and horses and showed that anaphylaxis is a universal immune system defense.” [7]

Dr. Richet went on to win a Nobel Peace Prize for his work.

For more information on these two doctors and their discoveries related to vaccinations, allergies and anaphylaxis, please read references [8] and [9].

Crucial scientific evidence has proven that vaccinations are responsible for children suffering food allergies for more than a century. Despite this evidence being available, Big Pharma and world governments have chosen to ignore the facts in favor of vaccination. The question is, why? Why has this crucial evidence been hidden for so long, potentially putting the lives of millions of vulnerable children at risk?

It is my firm belief that this information has been covered up and hidden for all these years for financial gain. After all, it is far more beneficial for Big Pharma to have millions of children using EpiPens than for children to be fit and healthy, and it is a recognized fact that Big Pharma and governments work hand in hand.

Christina was born and educated in London, U.K. In 1978, Christina changed her career path to dedicate her time to caring for the elderly and was awarded the title of Care Giver of the Year for her work with the elderly in 1980. For the last decade, Christina England has been investigating the safety and efficacy of vaccines. Her articles are known worldwide and Christina is highly valued for her groundbreaking journalism work.

Want News and Views from a European perspective? Go to EuropeReloaded.com [A TLB Project]

5 Facts About the Creepy Ties Between Pharmaceutical Companies and Doctors 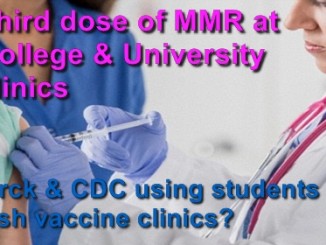 Colleges have decided to Push a Third dose of MMR Vaccine