(TLB) Editors note: In case you have been out of touch with the world, billionaire Jeffrey Epstein was charged on Monday in New York with child sex trafficking. But as also noted by the WSJ: “….judging by the political reaction, you’d think Labor Secretary Alex Acosta was the arraigned miscreant. Democrats are now stringing up Mr. Acosta for prosecutorial judgments he made a decade ago as a U.S. Attorney despite no evidence of wrongdoing.” (TLB)

To appreciate the significance of what I’m about to share, you really need to go back and read yesterday’s post: The Jeffrey Epstein Rabbit Hole Goes a Lot Deeper Than You Think.

In that piece, I shared many lesser known, but extremely bizarre facts about Jeffrey Epstein and the people around him. I also noted that it appeared his real job was to run a blackmail operation to ensnare some of the most wealthy and powerful people on earth. I alluded to the possibility that he was collecting this priceless information on behalf of a third party, and then just today we learn the following via the Daily Beast: 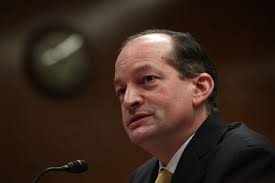 “Is the Epstein case going to cause a problem [for confirmation hearings]?” Acosta had been asked. Acosta [pictured] had explained, breezily, apparently, that back in the day he’d had just one meeting on the Epstein case. He’d cut the non-prosecution deal with one of Epstein’s attorneys because he had “been told” to back off, that Epstein was above his pay grade. “I was told Epstein ‘belonged to intelligence’ and to leave it alone,” he told his interviewers in the Trump transition, who evidently thought that was a sufficient answer and went ahead and hired Acosta. (The Labor Department had no comment when asked about this.)…

For almost two decades, for some nebulous reason, whether to do with ties to foreign intelligence, his billions of dollars, or his social connections, Epstein, whose alleged sexual sickness and horrific assaults on women without means or ability to protect themselves is well-known in his circle, remained untouchable.

It should be noted the reason I attach credibility to the above is based on who wrote it, Vicky Ward. She has an extensive history of digging into Epstein, and wrote one of the earliest profiles on him back in 2003. As she notes in today’s article:

I spent many months on his trail in 2002 for Vanity Fair and discovered not only that he was not who he claimed to be professionally, but also that he had allegedly assaulted two young sisters, one of whom had been underage at the time. Very bravely, they were prepared to go on the record. They were afraid he’d use all his influence to discredit them—and their fear turned out to be legitimate.

As the article was being readied for publication, Epstein made a visit to the office of Vanity Fair’s then-editor, Graydon Carter, and suddenly the women and their allegations were removed from the article. “He’s sensitive about the young women,” Carter told me at the time. (Editor’s Note: Carter has previously denied this allegation.) He also mentioned he’d finagled a photograph of Epstein in a swimsuit out of the encounter. And there was also some feeble excuse about the article “being stronger as a business story.” (Epstein had also leaned heavily on my ex-husband’s uncle, Conrad Black, to try to exert his influence on me, which was particularly unwelcome, given that Black happened to be my ex-husband’s boss at the time.)

Many people had assumed Epstein was untouchable merely because he had so much dirt on so many powerful people, but it increasingly looks far bigger than that. It appears he may have been untouchable because he was systematically collecting this information on behalf of an intelligence agency. If so, we need to find out precisely who he was working for.

This should be the number one story in the country right now. Blackmail at this level is a genuine national security issue.

Wow.
Apparently Acosta claimed Epstein “belonged to intelligence” and was told to back off.
It’s all making sense now.https://t.co/rXnZZwZCCC pic.twitter.com/R9MA7pSpMw

(TLB) published this article Authored by Mike Krieger via Liberty Blitzkrieg blog, with our appreciation for the coverage.

Additional articles about Epstein from The Liberty Beacon