At least one protester at McCloskey altercation was armed with firearm, sources say

Mark and Patricia McCloskey made national headlines at the end of June when they confronted a mob of protesters outside of their home on Portland Place, a wealthy private street west of downtown St. Louis. 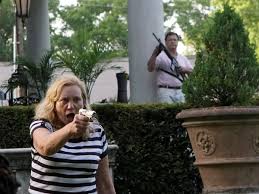 Photos and videos of the couple holding firearms and in some cases brandishing those firearms at the crowd went globally viral. St. Louis prosecutor Kim Gardner charged the pair on July 20 with “flourishing” their guns in an unlawful manner.

Yet sources in the St. Louis Police Department have told Just the News that video evidence from the altercation indicates that at least one member of the crowd of protesters was armed with a gun during the confrontation.

That allegation, if true, could be a key assertion in the McCloskeys’ defense. The pair’s lawyer has cited the state’s “castle doctrine” law, which stipulates that an individual may use deadly force without the need to retreat if he or she “reasonably believes that such deadly force is necessary” to protect his or her own life.

Two separate sources with knowledge of the investigation told Just the News that video evidence, supplied by alleged eyewitnesses to the scene, showed at least one individual in the crowd of protesters holding a firearm. Ballistic vests were also allegedly being worn by at least several protesters, per the video footage. Both of those conclusions bolster earlier claims by the McCloskeys, the department sources said.

Those observations were recorded in a little over a dozen pages of notes as part of a followup investigation into the incident. One source inside the department said the notes are currently under review as part of the larger investigation.

It is unclear if those notes have been shared internally with any other public officials or law enforcement. St. Louis Circuit Attorney Kim Gardner and Assistant Circuit Attorney Chris Hinckley have not publicly disclosed the existence of the alleged notes. The circuit attorney’s office declined via email to comment on the matter, citing the pending status of the case.

Supreme Court precedent, known as the “Brady rule,” dictates that prosecutors are required to turn over exculpatory evidence to defense attorneys in the course of prosecuting a case. Joel Schwartz, the McCloskeys’ defense attorney, confirmed to Just the News last week that he had not received standard procedural paperwork from the prosecutors, including the notes detailing the observations of the video footage.

“Having not seen any documents, I do not want to make any comment at this time,” he said.

Police department spokeswoman Michelle Wooding, meanwhile, declined comment. “Since warrant[s] have been issued, we would not comment or provide any additional information,” she said via email.

The claim of at least one firearm in the crowd comes alongside concerns that the circuit attorney’s office pressed the prosecution of the case against the McCloskeys in the fraught political atmosphere that has arisen amid ongoing Black Lives Matter protests.

“Everything fast-forwarded to: Get this report done, and let’s charge these people,” one of the police department sources said, claiming that the circuit attorney’s office gave itself “a first-hand integral role” in effectively directing the investigation.

Among the indications that the prosecutor’s office was scrambling to quickly move the investigation forward was a voicemail from Hinckley to a department officer, obtained by Just the News, in which Hinckley evinces significant frustration at an apparent delay in the charging process.

A source in the police department confirmed the voicemail was in response to a probable cause statement, a document used to justify an arrest or charges against an individual. The officer whose name was attached to that statement lodged over a dozen objections to its accuracy, documents provided to Just the News show.

Among the officer’s objections were the statement’s characterization of the group of protesters as “peaceful” (“I have no basis to prove/disprove the organization or the peacefulness intent of the group,” he wrote); the characterization of Mark McCloskey’s firearm as an “assault rifle” (the officer dismissed that as a “propaganda term”); and strictly factual objections such as an incorrect street name and a reference to a rifle “clip” rather than the accurate terminology of “magazine.”

In the voicemail, Hinckley (pictured here) appears to indicate that the officer in question had referred to that probable cause document as “bullshit.”

“We need to straighten this out. Because I’m about done with this crap,” Hinckley says in the message.

Apart from butting heads with the police department, Hinckley reportedly ordered Patricia McCloskey’s gun disassembled as part of a forensic analysis of the firearm.

St. Louis news station KSDK reported last week that, per internal documents, investigators could not properly test-fire McCloskey’s handgun upon obtaining it. Hinckley ordered the gun field-stripped, after which it was “found to have been assembled incorrectly” to the point that it was inoperable.

The gun “was reassembled properly, test fired and functioned as designed,” the documents state.

Hinckley subsequently declared that the gun was “readily capable of lethal use,” a necessary factor in the charges brought against Patricia McCloskey.

The couple, who are personal injury attorneys, reportedly made the handgun inoperative themselves in order to use it as a prop gun during a court case.

Missouri Attorney General Eric Schmitt (pictured) has moved to dismiss Gardner’s case against the McCloskeys, while Gov. Mike Parson has stated that he will pardon the couple if they are convicted of the charges.

There is A Real Pandemic and it is Not COVID-19