McCarthy leads GOP backlash on Dem Rep. Waters’ call for protestors to ‘stay on the streets’ 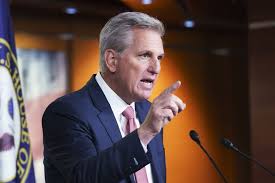 Former Minneapolis police officer Derek Chauvin is facing murder and manslaughter charges in the May 2020 death of George Floyd. A verdict is expected as early as this week.

McCarthy on Sunday demanded House Speaker Nancy Pelosi take action against Waters for her comment and said he would if she did not.

“Maxine Waters is inciting violence in Minneapolis, just as she has incited it in the past,” said the California Republican, according to The Daily Wire. “If Speaker Pelosi doesn’t act against this dangerous rhetoric, I will bring action this week.”

“@SpeakerPelosi you impeached President Trump after you said he incited violence by saying “march peacefully” to the Capitol. So I can expect a yes vote from you on my resolution to expel@RepMaxineWaters  for inciting violence, riots, and abusing power threatening a jury, right?,” tweeted Georgia Rep. Marjorie Taylor Green.

Graham Asks ‘What Did Pelosi Know’ About Capitol Riot [Video]