Fred Fleitz, former chief of staff at the National Security Council, made his comments following a report that the U.S. released unverified information in order to stop Russia from invading Ukraine

In the wake of a report that the U.S. released unverified intelligence reports as a way to stop Russia from invading Ukraine, a former U.S. intelligence official said that the Biden administration needs to “clean house” at the National Security Council and other agencies.

“We have to have a major housecleaning of these agencies,” said Fred Fleitz, former chief of staff at the National Security Council and a longtime intelligence expert. “I mean, the whole top floor of some of these agencies has to be fired.” 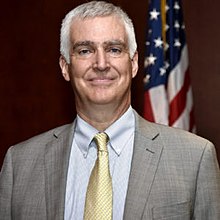 Fleitz (pictured left/Wikipedia) made his comments in response to a Wednesday report from NBC News that three senior U.S. intelligence officials admitted they released unverified intelligence in order to pressure Russian President Vladimir Putin to stand down from invading Ukraine.

Three U.S. officials said this week there is no evidence that Moscow has sent chemical weapons to Ukraine, the outlet reported. “They said the U.S. released the information to deter Russia from using the banned munitions,” the authors wrote.

The tactic is among many the Biden administration has used as part of an information war against Russia, the outlet noted.

“Coordinated by the White House National Security Council, the unprecedented intelligence releases have been so frequent and voluminous, officials said, that intelligence agencies had to devote more staff members to work on the declassification process, scrubbing the information so it wouldn’t betray sources and methods,” the outlet reported.

The revelation, if true, reflects poorly on advisers serving the administration, Fleitz said Thursday on the John Solomon Reports podcast.

“I don’t think this is just the intelligence agencies,” Fleitz said. “I think this was the National Security Council. This is the White House deciding that they could use this intelligence to make outrageous claims and things that Biden says were true that weren’t true.”

On a number of occasions, the press asked to see the declassified reports on the alleged plan to use chemical weapons, Fleitz said, but the White House wouldn’t release them, “which I thought was very suspicious.”

Information warfare has been used to Western advantage against Putin in the past, one U.S. intelligence official told Just the News, and has helped “level the playing field.” The method “works when it works,” the official said. But using it also brings risks.

“If you get something wrong, you lose credibility,” the official said. “And you lose in a big way when you lie to the American people. Intelligence agencies must tread carefully.”

“I’m not prepared to say that the intelligence agencies did this,” Fleitz said. “For example, there might have been a report that they wrote that said, ‘We have a low probability report that Putin might do this.’ And then the NSC said, ‘Aha, let’s run out and say the Russians are going to do this.'”

The report calls into question other seemingly damning indictments from the intelligence community, one congressman said.

“That’s frightening stuff when you have this kind of thing happening from former intel officials and the example” from NBC, Jordan told the John Solomon Reports podcast.

Moscow, meanwhile, has claimed that Ukraine plans to launch a false flag poison gas attack that will be blamed on Russia, according to the Russian language Ria Novosti.

The outlet quoted Russian Defense Ministry spokesman Igor Konashenkov as saying the attack will be “a major provocation using poisonous substances” in Kharkiv.

Keeping track of charges and counter-charges is “a massive undertaking,” the U.S. intelligence official said.

US Healthcare Subject To China’s ‘Global Chokehold’ On Medicines