Bombshell Report Confirms US Coalition Struck A Deal With ISIS

At a moment of widespread acknowledgement that the short-lived Islamic State is no longer a reality, and as ISIS is about to be defeated by the Syrian Army in its last urban holdout of Abu Kamal City in eastern Syria, the US is signalling an open-ended military presence in Syria. On Monday Defense Secretary Jim Mattis told reporters at the Pentagon that the US is preparing for a long term military commitment in Syria to fight ISIS “as long as they want to fight.”

Mattis indicated that even should ISIS loose all of its territory there would still be a dangerous insurgency that could morph into an “ISIS 2.0” which he said the US would seek to prevent. “The enemy hasn’t declared that they’re done with the area yet, so we’ll keep fighting as long as they want to fight,” Mattis said. “We’re not just going to walk away right now before the Geneva process has traction.”

Defense Secretary Jim Mattis stands in front of a map of Syria and Iraq.

Mattis was referring to the stalled peace talks in Geneva which some analysts have described as a complete failure (especially as the Geneva process unrealistically stipulates the departure of Assad), as the future of Syria has of late been increasingly decided militarily on the battlefield, with the Syrian government now controlling the vast majority of the country’s most populated centers.

Ironically just as some degree of stability and normalcy has returned to many parts of the county now under government control, Mattis coupled the idea of a permanent US military presence with the goal of allowing Syrians to return to their homes. He said, “You keep broadening them. Try to (demilitarize) one area then (demilitarize) another and just keep it going, try to do the things that will allow people to return to their homes.”

Meanwhile Turkey once again reiterated that the US has 13 bases in Syria, though the US-backed Syrian YPG has previously indicated seven US military bases in northern Syria. The Pentagon, however, would not confirm base locations or numbers – though only a year-and-a-half ago the American public was being assured that there would be “no boots on the ground” due to mission creep in Syria.

During the last year of the Obama administration, State Department spokesman John Kirby was called out multiple times by reporters for tell obvious and blatant lies concerning “boots on the ground” in Syria.

Remember this? “We are not going to be involved in a large scale combat mission on the ground in Syria. That is what the president [Obama] has long said.”

Last summer, in a move that angered the US administration, Turkish state media leaked the locations of no less than ten small scale American military bases in northern Syria alone (revelations of US bases in southern Syria began surfacing as well). As another recent Pentagon press conference further acknowledged, these bases – though likely special forces forward operating bases – require a broad network of US personnel operating in various logistical roles inside Syria and likely now includes thousands of US troops deployed on the ground, instead of the Pentagon’s official (and highly dubious) “approximately 500 troops in Syria” number.

What makes even the timing of Mattis’ declaration of an open ended military commitment in to supposedly fight ISIS is that it came the same day that the BBC confirmed that the US and its Kurdish SDF proxy (Syrian Democratic Forces) cut a deal with ISIS which allowed for the evacuation of possibly thousands of ISIS members and their families from Raqqa.

According to yesterday’s bombshell BBC report:

The BBC has uncovered details of a secret deal that let hundreds of Islamic State fighters and their families escape from Raqqa, under the gaze of the US and British-led coalition and Kurdish-led forces who control the city. A convoy included some of IS’s most notorious members and – despite reassurances – dozens of foreign fighters. Some of those have spread out across Syria, even making it as far as Turkey.

IMPORTANT NOTE: Omar fields falling into hands of SDF could well have been part of a Quid pro quo deal that allowed ISIS to leave Raqqa for allowing SDF to capture Omar oil field after ISIS attacks #SyrianArmy positions. If you read 1 article today, make sure its one by BBC below https://twitter.com/ehsani22/status/930134159607070721 …

The @BBCBreaking uncovers a secret #USA deal that let hundreds of #ISIS fighters, including foreign militants, escape from #Raqqahhttp://bbc.in/2zzRWjy  via @O_Rich_

4000 #ISIS and families evacuated by #USA forces from #Raqqah, including foreign fighters: the scandal of the century. pic.twitter.com/P5UdgbgBn1 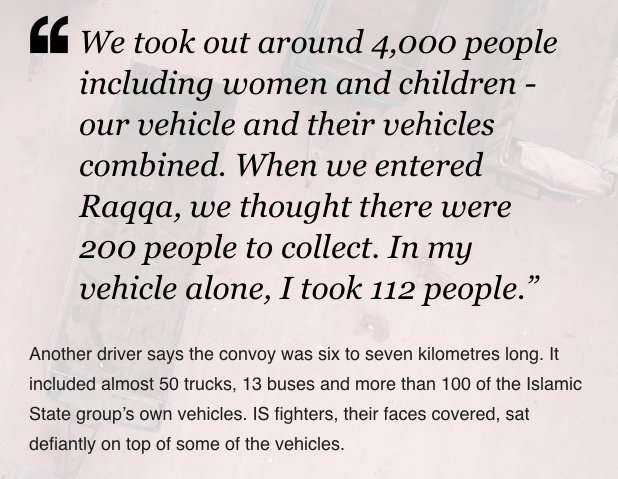 Though it’s always good when the mainstream media belatedly gives confirmation to stories that actually broke months prior, the BBC was very late to the story. ISIS terrorists being given free passage by coalition forces to leave Raqqa was a story which we and other outlets began to report last June, and which Moon of Alabama and Al-Masdar News exposed in detail a full month prior to the BBC report.

And astoundingly, even foreign fighters who had long vowed to carry out attacks in Europe and elsewhere were part of the deal brokered under the sponsorship of the US coalition in Syria. According to the BBC report:

Disillusioned, weary of the constant fighting and fearing for his life, Abu Basir decided to leave for the safety of Idlib. He now lives in the city. He was part of an almost exclusively French group within IS, and before he left some of his fellow fighters were given a new mission.

“There are some French brothers from our group who left for France to carry out attacks in what would be called a ‘day of reckoning.’”

Much is hidden beneath the rubble of Raqqa and the lies around this deal might easily have stayed buried there too. The numbers leaving were much higher than local tribal elders admitted. At first the coalition refused to admit the extent of the deal.

So it appears that the US allowed ISIS terrorists to freely leave areas under coalition control, according to no less than the BBC, while at the same time attempting to make the case before the public that a permanent Pentagon presence is needed in case of ISIS’ return. But it’s a familiar pattern by now: yesterday’s proxies become today’s terrorists, which return to being proxies again, all as part of justifying permanent US military presence on another nation’s sovereign territory.

America’s Syrian adventure went from public declarations of “we’re staying out” to “just some logistical aid to rebels” to “okay, some mere light arms to fight the evil dictator” to “well, a few anti-tank missiles wouldn’t hurt” to “we gotta bomb the new super-bad terror group that emerged!” to “ah but no boots on the ground!” to “alright kinetic strikes as a deterrent” to “but special forces aren’t really boots on the ground per se, right?” to yesterday’s Mattis declaration of an open-ended commitment. And on and on it goes.

With our thanks to Tyler Durden, TLB published this story from ZeroHedge. Visit ZeroHedge for more pertinent articles.