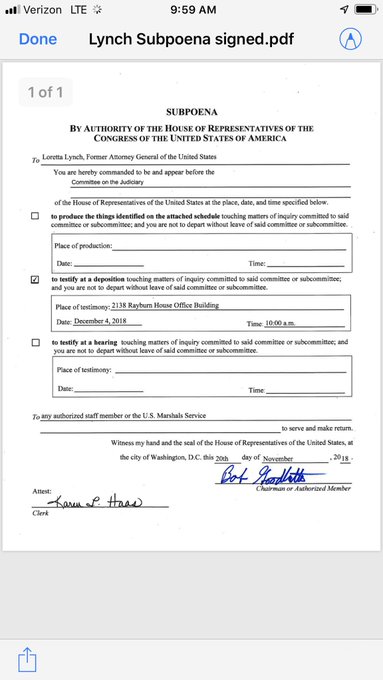 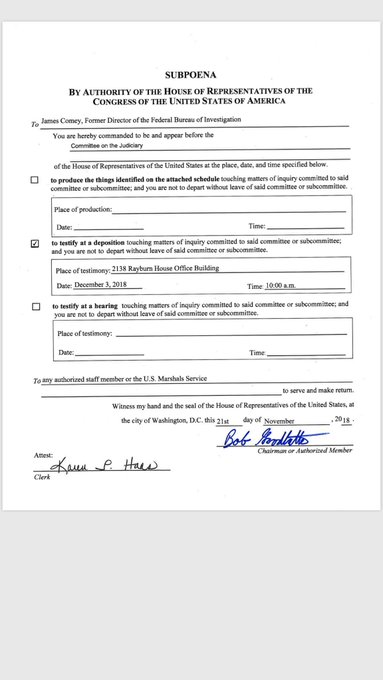 House Judiciary Chairman Bob Goodlatte, in one of his last acts in power, issued subpoenas for James Comey and Loretta Lynch to come for private depositions on Dec. 3 and Dec. 4, respectively.

The subpoenas came early, as they were previously expected on November 29 and December 5, as reported by CNN‘s Manu Raju.
While Comey revealed his subpoena in a Thanksgiving tweet – stating he plans to resist a “closed door” testimony (during which confidential information could be discussed), Goodlatte’s confirmation is the first we have learned of Lynch’s order to appear.
.

Happy Thanksgiving. Got a subpoena from House Republicans. I’m still happy to sit in the light and answer all questions. But I will resist a “closed door” thing because I’ve seen enough of their selective leaking and distortion. Let’s have a hearing and invite everyone to see.

“The Committees have repeatedly requested to interview Mr. Comey and Ms. Lynch respectively regarding their roles in certain decisions, but they have yet to voluntarily appear,” reads the statement from the Judiciary Committee.

In October Comey rejected a request by the House Judiciary Committee to appear at a closed hearing as part of the GOP probe into allegations of political bias at the FBI and Department of Justice, according to Politico.

“Mr. Comey respectfully declines your request for a private interview,” said Comey’s attorney, David Kelly, in a response to the request.

“We have invited Mr. Comey to come in for a transcribed interview and we are prepared to issue a subpoena to compel his appearance,” said a committee aide.

Goodlatte invited Comey to testify as part of a last-minute flurry of requests for high-profile Obama administration FBI and Justice Department leaders, including former Attorney General Loretta Lynch and former Deputy Attorney General Sally Yates. He threatened to subpoena them if they didn’t come in voluntarily. –Politico

The House committee has been investigating whether overwhelming anti-Trump bias with in the FBI and Department of Justice translated to their investigations of the President during and after the 2016 US election.

(TLB) published this article from ZeroHedge as compiled by Tyler Durden with our thanks for the coverage.

Weaponising Rape Myths And Consent In The Hunt For Julian Assange