Published to TLB via TABU

This has been in the works to get all who travel anywhere shot up with vaccines and in compliance with the biometric REAL ID being rolled out now in 5 states, but coming to every state. And now they simply will attach mandatory .

Zika Virus Made Available to Researchers by Rockefeller Foundation in 1953

While Brazil Was Eradicating Zika Mosquitoes, America Made Them Into Weapons

The Centers for Disease Control and Prevention issued an unprecedented travel warning Monday, advising pregnant women and their partners not to travel to a small community just north of downtown Miami, where Zika is actively circulating. This is the first time the CDC has warned people not to travel to an American neighborhood for fear of catching an infectious disease, according to agency spokesman Tom Skinner.

The warning came after 10 additional people in Florida were found to have been infected with Zika virus after being bitten by local mosquitoes, bringing the total to 14.

Florida Gov. Rick Scott and CDC Director Dr. Tom Frieden announced the development in separate news conferences Monday. The new cases were found by door-to-door surveys of 200 people in their homes and businesses, and they were identified by urine and blood samples that tested positive for the virus or an antibody.

1947 Rockefeller Patent Shows Origins Of Zika Virus: And What About Those Genetically Modified Mosquitoes?

As you’ve probably already heard, the World Health Organization (WHO) recently made an announcement declaring the Zika virus to be a global health emergency.

TLB recommends other great articles at TABU; Towards A Better Understanding 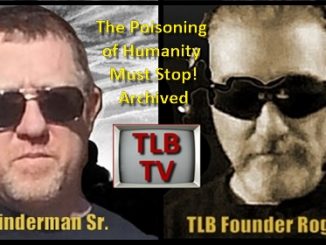 TLBTV Presents – The Poisoning of Humanity Must Stop

The Hidden Connection Behind Viruses, Vaccines and Cancer

4 Comments on Coming Very Soon! You Will Not Be Able to Fly Unless You Get Shot.