As hundreds turned out to protest the NRA over the weekend, Parkland survivor David Hogg arrived and was photographed reportedly surrounded by guns.

Fairfax, VA — Anti-gun activists descended on the headquarters of the National Rifle Association over the weekend to call for stricter gun control, with some activists advocating for completely disarming all civilians. Parkland shooting survivor David Hogg was also in attendance and the NRA pointed out something extremely ironic—he was reportedly surrounded by armed guards.

Showing just how uninformed they were in their fight to take away your rights, some of the protesters outside of the NRA were recorded on video calling for a ban on “fully semiautomatic guns,” and noted that it is the “ammunition that makes a semiautomatic [an] automatic.” 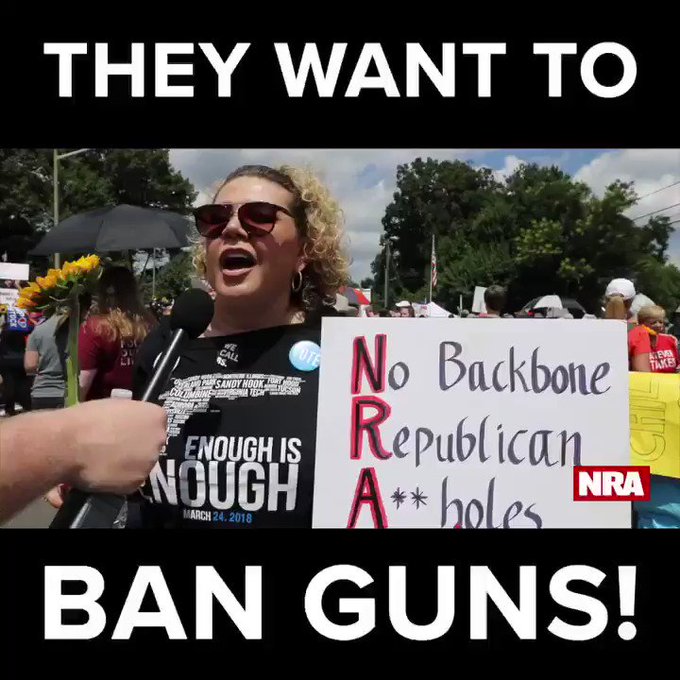 What do you think about “fully semi-auto” #firearms? These misinformed #protestors seem to think they exist and that ALL #GUNS SHOULD BE #BANNED. #Protest 101: before you make signs and hit the streets, know the basics of what you’re #protesting! Stay tuned for more! #2A #NRA

Another female participant told the camera crew she “does not think it’s necessary for civilians to carry around firearms and things that can kill people in an instant of a second.” She added, “I do not think civilians need guns at all.” 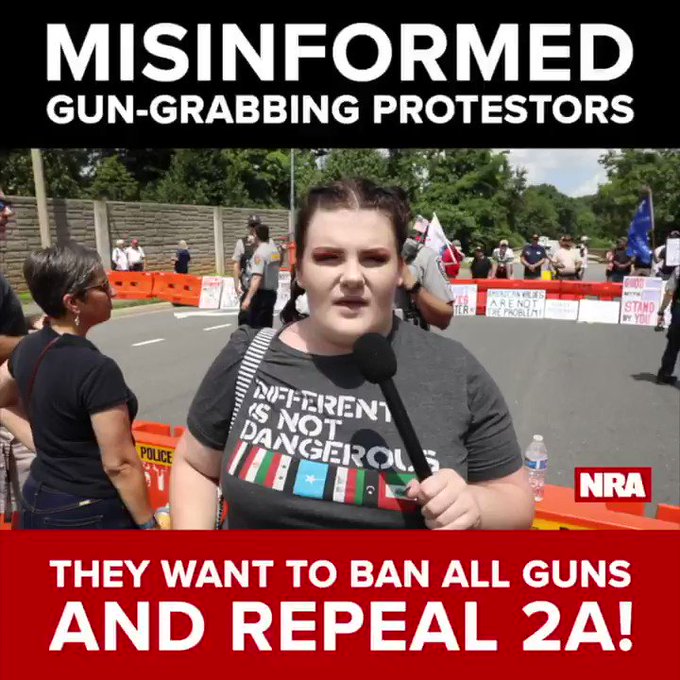 Yesterday was #Saturday, which means our HQ employees were at home enjoying the sun with their family and friends. Meanwhile, #misinformed #gun-grabbing #protestors were chatting with our social media team. As promised, here is part 1 of 3. Stay tuned! Happy watching!

Later on in the day, David Hogg arrived along with his entourage of security to also participate in the protest against the NRA. Several photographs show him surrounded by large men who appear to have bulges under their shirts indicating that they are likely armed.

The NRA then taunted Hogg on Twitter by calling him out for having armed security while simultaneously calling for citizens to have their right to bear arms restricted.

“Today, @davidhogg111 (with armed security) and a bunch of gun-grabbing activists protested our empty HQ,” the gun-rights organization wrote on Twitter on Saturday night. 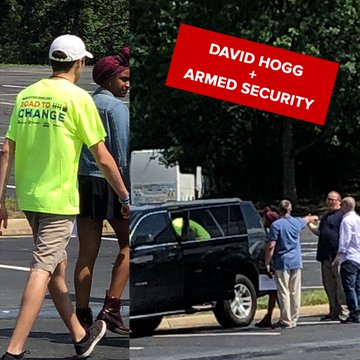 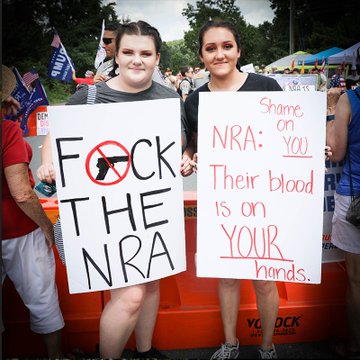 Today, @davidhogg111 (with armed security) and a bunch of gun-grabbing activists protested our empty HQ, and there were some interesting people there. Our social team chatted up the crowd and ended the day with ice cream paid for by @Everytown! Stay tuned for video interviews!

In the thread on the tweet, defenders of Hogg pointed out that he needs armed security because of alleged threats against his life. However, they are entirely missing the point that all people — not just David Hogg — deserve the right to protect themselves with firearms.

Sadly, this is a common sentiment among gun-control activists and it is on display quite often.

As TFTP reported, in March, millions of students, politicians, and activists alike marched across America to demand the government take away their rights. This move was promoted by the government, boosted by the mainstream media, and even accepted by school systems across the country. By no means was this a show of resistance. It was, however, an act of hypocrisy for politicians.

During the march, Andrew Cuomo walked down the streets of New York to join activists in a die-in and demand stricter gun laws. Activists chanted “enough is enough” as they used the tragedy in Parkland, Florida as a reason to demand innocent, law-abiding Americans give up their guns. 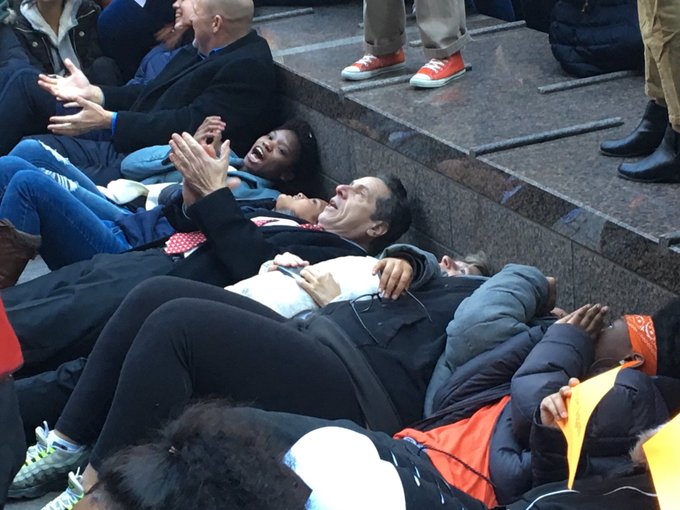 Gov Cuomo joins students in die-in after they walked out of school in Lower Manhattan. Students chant “enough is enough” about gun violence and school shootings. @wcbs880 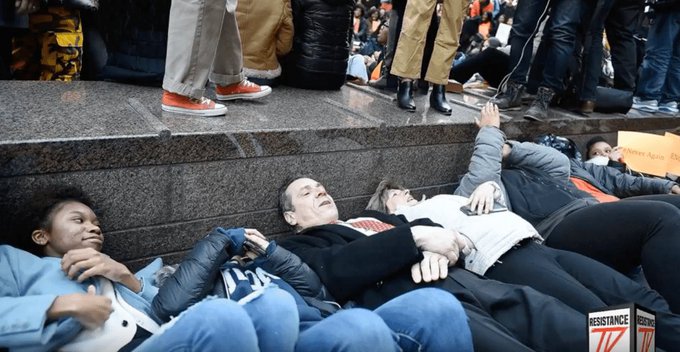 However, there was one thing peculiar about this incident which didn’t take long for the truth-seeking internet sleuths to find out. As Cuomo walked down the street and laid down on the ground to push for legislation to take your guns—the mayor was quite literally surrounded by guns.

It’s not just politicians who call for removing your right to self-defense while hypocritically clenching to theirs. As TFTP reported earlier this year, Hollywood’s elite gathered for the massive glorification of celebrity at the 90th Annual Oscars celebration. While there were multiple politically charged themes like #metoo and Time’s Up movements, one theme, in particular, highlighted the blatant hypocritical nature of these extremely rich celebrities. Gun control.

The gun control theme in Hollywood is nothing new as it is quite common for celebrities to glorify guns and violence on the silver screen and then criticize the rights of private citizens who advocate for their right to self-defense using guns.

This time, however, as celebrities donned their orange pins and blasted gun rights, their hypocrisy, just like Cuomo, was on full display. Like the politicians who call for private citizens to be stripped of their right to self-defense, the celebrities in Hollywood failed to realize that they are also constantly surrounded by guns.

The #HollywoodHypocrite elites who have their own armed security guards at their homes & when they go out in public to protect THEM, will wear cute little orange flag pins at the #Oscars tonight, in support of all the rest of us giving up OUR protection. http://ijr.com/2018/03/1072343-celebrities-will-wearing-orange-american-flag-lapel-pins-oscars-not-patriotism/ …

And here it is.. #HollywoodHypocrites at #Oscars protected with road closures, security perimeter 10’wall, FBI agents, Firefighters, Police copters & security guards will be inside the Dolby. Their political statement: gun control for the rest of us. #2A pic.twitter.com/9jXnemA3dI 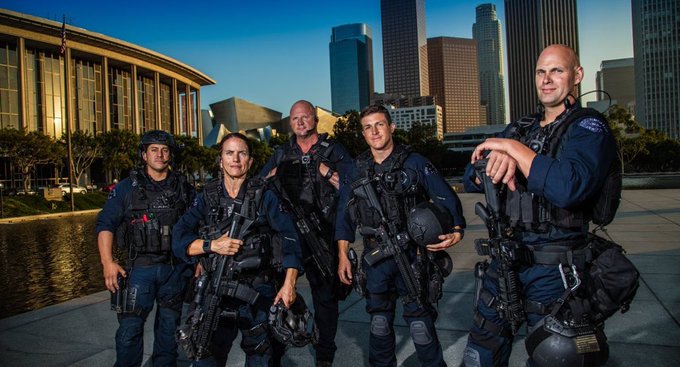 It is also important to point out the hypocrisy of the NRA as well. As TFTP has reported, although the NRA makes big waves when certain individuals make the news for gun rights, they are entirely silent—much of the time—when it comes to police killing or arresting people of color for practicing their second amendment rights.

Currently, a pregnant mother is sitting in prison in Michigan, where she will soon give birth to her second child, as she spends the next two years serving the mandatory sentence for felonious assault and a felony firearms conviction.

But Siwatu-Salama Ra, 26, was a legal gun owner with a concealed carry permit in a state that allows open carry, and when she pulled out her gun, she was defending herself, her mother and her 2-year-old daughter. The facts of the case all show that Ra acted in self-defense, saving her and her family’s life with a gun and the NRA said nothing when she was thrown in a cage.

The NRA also failed to speak up about the murder of Philando Castile—a lawful concealed carry permit holder—who was murdered by police despite committing no crime.

(TLB) published this article from where it first appeared at The Free Thought Project.com with our sincere thanks for the availability.

About the writer Matt Agorist

Matt Agorist is an honorably discharged veteran of the USMC and former intelligence operator directly tasked by the NSA. This prior experience gives him unique insight into the world of government corruption and the American police state. Agorist has been an independent journalist for over a decade and has been featured on mainstream networks around the world. Agorist is also the Editor at Large at the Free Thought Project. Follow @MattAgorist on Twitter,Steemit, and now on Facebook.
••••

Why Are Soros And Gates Buying UK ‘VIRUS’ Testing Company?

Jared Kushner Advised MbS On How To “Weather The Storm” After Khashoggi Death: Report