FBI Reached Out To 10 People In Reopened Kavanaugh Probe; Grassley Says “No Hint” Of Misconduct

Afternoon update at bottom of this post ~TLB ed.

“I’ve now received a committee staff briefing on the FBI’s supplement to Judge Kavanaugh’s background investgiation file. There’s nothing in it that we didn’t already know. These uncorroborated accusations have been unequivocally and repeatedly rejected by Judge Kavanaugh.” 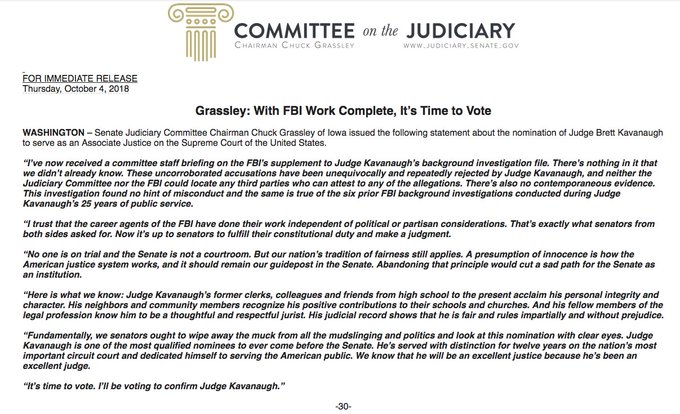 After receiving briefing on FBI report, Chairman Grassley says the FBI’s investigation “found no hint of misconduct and bureau couldn’t find any third parties to back up Ford’s allegations.

White House deputy press secretary Raj Shah told CNN’s “New Day” that the FBI contacted 10 people as part of its reopened investigation into allegations against Brett Kavanaugh, and interviewed nine of them – none of whom corroborated claims levied against the Supreme Court nominee.

Shah added that “Without getting in to the details, we feel very confident that when the senators have the opportunity to review this material, as they’re just beginning to right now, that they are going to be comfortable confirming Judge Kavanaugh” after they see the results of the investigation.

On CNN, White House spox @RajShah45 says FBI “contacted” 10 people as part of its investigation of Kavanaugh. Adds that senators will be “comfortable voting to confirm” him. pic.twitter.com/J2sZbYrj1u

The White House has received the Federal Bureau of Investigation’s supplemental background investigation into Judge Kavanaugh, and it is being transmitted to the Senate. With Leader McConnell’s cloture filing, Senators have been given ample time to review this seventh background investigation. This is the last addition to the most comprehensive review of a Supreme Court nominee in history, which includes extensive hearings, multiple committee interviews, over 1,200 questions for the record and over a half million pages of documents. With this additional information, the White House is fully confident the Senate will vote to confirm Judge Kavanaugh to the Supreme Court.” – White House Spokesman Raj Shah

Senate Judiciary Committee Chairman Chuck Grassley (R-IA) confirmed delivery early Thursday morning, where he tweeted the details of how the document would be handled;

Supplemental FBI background file for Judge Kavanaugh has been received by @senjudiciary Ranking Member Feinstein & I have agreed toalternating EQUAL access for senators to study content from additional background info gathered by non-partisan FBI agents. FBI supplement requested Friday sept 28 by bipartisan group of senators w specific scope of current/credible allegations. Dr Ford & Judge Kavanaugh had opportunity to testify under oath b4 public/cmte to tell senators what they know. This FBI material will b handled per 2009 memorandum of understanding/MOU signed btwn Obama WHCounsel & then-SJC Chairman Leahy. Thats latest memorialization of this “loan agreement” of ExecBranch material. Feinstein, Durbin, Schumer, & others were on SJC in 09 & didnt object.

The hasty completion of the report to the Senate drew the ire of some Democrats, including high-profile attorney Michael Avenatti, who says that the agency did not contact a sufficient number of witnesses in the probe.

“The FBI investigation was no investigation at all. @realDonaldTrump, @senatemajldr and @ChuckGrassley ensured that numerous key witnesses, including six very damaging witnesses I am aware of, were never even interviewed. Their conduct is a disgrace – they never wanted the truth,” Avenatti tweeted Thursday morning.

The FBI investigation was no investigation at all. @realDonaldTrump, @senatemajldr and @ChuckGrassley ensured that numerous key witnesses, including six very damaging witnesses I am aware of, were never even interviewed. Their conduct is a disgrace – they never wanted the truth.

Earlier in the week after news emerged that the White House was limiting the scope of the FBI review, Democrats on the Senate Judiciary Committee sent a letter to the Trump administration, urging White House counsel Don McGahn to ensure that there were no limits to the investigation.

“We ask that you confirm that the FBI background investigation will include the allegations of Christine Blasey Ford, Deborah Ramirez and Julie Swetnick and that the FBI will perform all logical steps related to these allegations, including interviewing other individuals who might have relevant information and gathering evidence related to the truthfulness of statements made in relation to these allegations,” wrote the senators.

(TLB) published this report as compiled by Tyler Durden at ZeroHedge