Do not pass GO, do not collect $200? Feds step in to prosecute Portland rioters after local DA declines to enforce the law

The Trump administration is giving rioters in Portland at least a risk of accountability, filing US District Court charges when the local district attorney declines to prosecute and deputizing state police to make federal arrests.
.

Kevin Phomma became the latest Portland protester to be hit with federal charges, as the US Attorney’s Office for the region announced on Friday that he was indicted for felony civil disorder. Phomma, 26, who allegedly assaulted police with bear spray, faces a maximum sentence of five years in federal prison if convicted.

The indictment marked the seventh such case this week and followed an announcement by US Attorney Billy Williams (pictured here) that 74 people were being charged with federal crimes in connection with crimes they committed during anarchist riots that have raged on for three months in the aftermath of George Floyd’s death in Minneapolis police custody on May 25.

“The nightly violence has to stop,” said US Marshal Russel Burger. “It is drowning out the voices of the many who are calling for change and pulling police resources away from their primary mission of keeping this community safe.”

Since then, the feds have deputized state troopers, giving them the option of arresting violent protesters to be prosecuted under federal laws. Such an option could be appealing for police, who have seen protesters released without charge after being arrested for riot-related crimes. 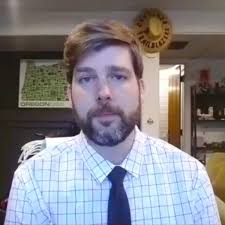 Multnomah County District Attorney Mike Schmidt (pictured) said last month that his office would drop most of the charges that had been filed against protestors in Portland. Nor will Schmidt’s office proceed with cases against accused rioters unless there’s also an allegation of specific property damage or use of force. “What we’re doing is recognizing that the right to speak and have your voice heard is extremely important,” the DA said.

Police said that approach is giving rioters confidence that they won’t face consequences for their crimes, which is making the situation even more dangerous. “If it is acceptable for rioters to commit acts of violence against community members and to try and burn down occupied buildings, and if this conduct is allowed to continue, then Portland is lost,” Portland Police Association President Daryl Turner said in a message last month to Schmidt and Mayor Ted Wheeler.

One example of how Schmidt’s policy is playing out is Travis Hessel, who was charged on May 31 with several felonies, including burglary, for crimes he allegedly committed as BLM protests began in Portland. Schmidt’s office dismissed those charges on August 3, and Hessel was arrested the next day for allegedly assaulting a police officer with a baton during an Antifa attack on a police precinct office. He was quickly released without charges.

Another example is Michael Reinoehl, an Antifa activist who was arrested in July for carrying a loaded weapon, resisting arrest and interfering with police. He was released without charges being pursued and allegedly stalked and murdered a Patriot Prayer group demonstrator, Aaron ‘Jay’ Danielson, on August 29. Reinoehl was killed on Thursday night when he allegedly drew his weapon as federal law enforcement officers tried to arrest him for shooting Danielson.

The violence in Portland has been so severe that [Mayor] Wheeler (pictured here) announced that he’s leaving his upscale condominium in the Pearl District after rioters firebombed the building on Monday. But Wheeler has blamed Trump for the rise in violence, saying the president has created “the hate and the division.”

Being charged in federal court is clearly a concern for violent protesters. About 90 percent of federal indictments lead to guilty pleas, according to Pew Research Center. Less than one percent of defendants in the government’s 2018 fiscal year went to trial and won acquittal.

A group that has raised $1.35 million through GoFundMe to bail Portland protesters out of jail sent out a notice to supporters on Friday, saying that it has confirmed reports that FBI agents have begun visiting the homes of demonstrators in the past week. Some of those visits resulted in arrests and filing of federal charges, in some cases where similar state charges had been dropped and some cases when state charges were still pending. The notice included tips on dealing with an FBI visit, such as “don’t answer the door” and “do not talk to the police.”

Portland mayor leaves pricey condo after rioters try to TORCH it, but says he still stands with protesters

(TLB) published this article from RT-USA News with our appreciation for this perspective.

Tony Cox, a US journalist who has written or edited for Bloomberg and several major daily newspapers.

VIDEO: Students say they’re not proud to be American [Little Minds of Mush]

Americans have seen this Obama-Biden team before and chose Trump… They’ll do it again!!

“They All Look The Same” – Hillary Cracks Racist Joke… [Video]