Sen. Dianne Feinstein has been caught not wearing a mask while inside an airport, even though she has called for a mandatory rule to require all airline passengers to wear masks.

The California Democrat was spotted without a mask at Dulles International Airport in Virginia on Friday, pictures of which Fox News host Tucker Carlson aired on his show on Monday. She was seen near a man wearing a face mask as she walked through Signature Flight Support, a terminal that services passengers who are flying on private aircraft.

Feinstein recently penned a letter to the Federal Aviation Administration. Here’s what she said in part:

“I write to urge you to implement a mandatory mask policy for all airport and airline employees and passengers as cases of coronavirus continue to surge. I ask that you issue guidance as soon as possible so passengers can have a clear understanding of the requirements and so that we may reduce exposure for workers and travelers alike. …

While some transit agencies and airlines have implemented mandatory mask guidance for the public, reports indicate that the patchwork of rules have only sowed confusion among passengers. Therefore, I ask that you issue clear, nationwide, mandatory mask requirements for all aviation employees and travelers.”

Carlson had a field day.

“Well, given that, today, this show exclusively obtained photographs of — and this is going to rock your world — Dianne Feinstein in a private terminal at Dulles airport, an FBO as they say in private aviation, on Friday,” Carlson said. “In the photographs, Feinstein can be seen smiling without a mask on.”

Feinstein flouting the very rule she herself proposed brought back memories of House Speaker Nancy Pelosi, a fellow California Democrat.

The speaker has supported full lockdowns over COVID-19 and advocates a national mask policy, but she was caught late last month inside a hair salon in California — even though all were ordered closed by the governor — walking around without a mask. 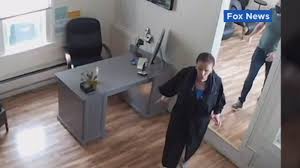 In security footage obtained by Fox News, Pelosi was seen walking through the eSalon in San Francisco on Aug. 31. During an appearance on MSNBC that same night, Pelosi blasted President Trump for delivering his Republican National Convention acceptance speech before a live audience on the White House South Lawn where many people were not wearing masks.

Despite blowback for her “blow out,” the 81-year-old California Democrat was slow with an excuse — and finally said it was all a setup.

“I take responsibility for trusting the word of the neighborhood salon that I’ve been to over the years many times, and when they said, ‘We’re able to accommodate people one person at a time.’ I trusted that,” the speaker said. “So I take responsibility for falling for a setup. And that’s all I’m going to say on that. I think that this salon owes me an apology, for setting me up.”

Philadelphia’s Democratic Mayor Jim Kenney was also caught not abiding by rules he put in place for Philadelphians.

A photo of Kenney — without a mask — sitting inside a restaurant (above) flashed around social media websites in August. The mayor was in Maryland, even as his own order had banned indoor dining in his city.

“I know some are upset that I dined indoors at a restaurant in Maryland yesterday,” he said after the photo emerged. “I felt the risk was low because the county I visited has had fewer than 800 COVID-19 cases, compared to over 33,000 cases in Philadelphia. Regardless, I understand the frustration.”

ISRAEL IS THE ONE WITH NUCLEAR WEAPONS, NOT IRAN! This is the issue