ER Editor: We’re including some video footage from RT of the recent, dramatic clash between French police and firefighters. We’ve published extensively in the past about how French police are seriously overworked, underpaid and disrespected by the government, and face new pressures from no-go zones around France. Their suicide rates have climbed alarmingly over the past few years. (At the same time, we don’t condone the horrible violence that has been perpetrated by some of them towards the Yellow Vests.) Firefighters are facing some of these pressures, too, and are being set up for attack in no-go zones. These services are in a critical state, but Macron’s government has worked hard, including promising to exempt the police from his proposed pension reforms, to keep the police on side. Now this.

France: Riot Police Beat up Striking Firefighters as Media Looks the Other Way

The media, quick to condemn violence against protesters elsewhere in the world, largely ignored the brutal crackdown on firefighters joining months-long nationwide protests in France.

Truncheons rain down on fallen protestors as masked, black-clad riot police brutalize firefighters striking in full uniform, looking distinctly similar to their peers in the police, except that they are not carrying weapons. That was the scene that few in the world saw this week, as media largely ignored firefighters joining the months-long nationwide protests against President Emmanuel Macron and his attempts to make sweeping changes to French society.

this is the neoliberal hell created by macron: police beating firefighters on the streets, while the entire western press ignores itpic.twitter.com/qtZufIwPdy

Wearing protective clothing, firefighters set themselves ablaze in the streets, performing perhaps the safest self-immolation protest in world history. Yet few outside France saw the action; protestors took to social media to decry the mainstream disinterest in the growing movement, the largest and most sustained protests in the country since May 1968. Many asserted that if repression on this scale were happening in Venezuela or Iran, it would be the number one story in North America and across the globe. Yet a Wednesday morning search on the homepages of the New York Times, Google News and Yahoo! News found that there were zero links to coverage of the previous day’s events. 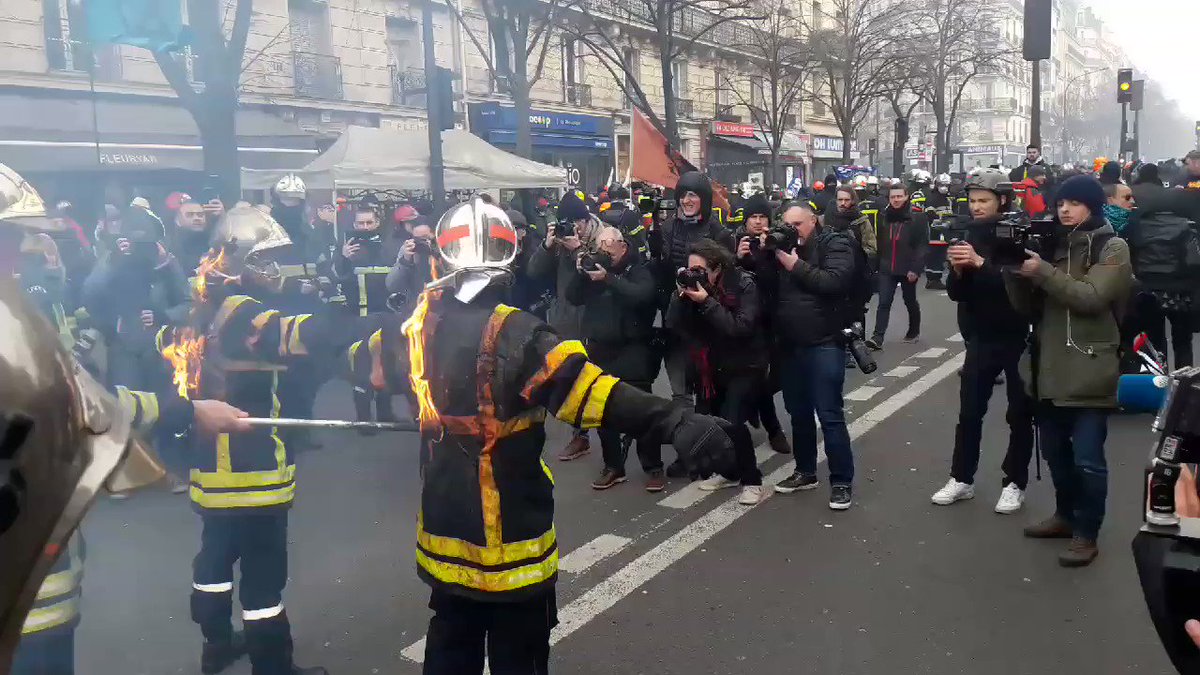 Nor have elites in other Western countries been stirred even as professional photographer Taha Gueffaf was rushed to hospital after police threw a grenade at him. Gueffaf shared an x-ray of his injuries on Twitter, asking Interior Minister Christophe Castaner why there were metal grenade fragments in his leg. There has similarly been no reaction at all from professional human rights advocates like the Committee to Protect Journalists or Human Rights Watch, even as Iran continues to be a “trending” topic on the latter’s website.

Having become decidedly unpopular (December polls put his approval rating at around 30 percent, with nearly 70 percent disapproval), Macron was elected president in 2017. As France’s centrist parties crumbled, the first round of the election was close to a four-way tie, but only Macron and fascist National Front leader Marine Le Pen qualified for the runoff vote (ER: her views cannot be described as ‘fascist’). Macron won the second round easily, but abstention was high, and nearly 12 percent chose to go to polling stations and post blank ballots as a form of protest or disgust.

Macron is a firm believer in neoliberalism, modeling his politics after British Prime Minister Margaret Thatcher. He insists that France cannot be reformed but must be “transformed” from a social-democratic state into a neoliberal one more resembling the United States. The trigger for the wave of current protests was the government’s plans to make sweeping changes to France’s pension plan, seen by many as the crown jewel in the country’s welfare state. The president wishes to amalgamate 42 extant pension programs into a single, unified one, which he claims would be more fair and transparent. However, it would mean many unions would have to surrender hard-fought benefits for their members and accept a national standard, which includes raising the retirement age from 62 to 67.

Macron has faced near-constant popular resistance for much of his time in office. Since November 2018, the Yellow Vests have protested across the country against his tax plans that they claim hit the poor and middle classes hardest. This current round of strikes began in early December, led by transport unions who have shut down much of the country. Paris’ iconic metro system has been severely affected, as have regional trains. Meanwhile, many of France’s ports, including Calais, Dunkirk, Marseille and Le Havre have seen workers close them down.

Transport unions have found some unusual allies joining them. Lawyers, fearing their strong pension plan will be taken away from them, have gone on strike across the country, theatrically throwing their gowns down in a symbolic gesture of defiance. Striking ballet dancers performed a free show on the steps of the famous Palais Garnier opera house in Paris. Meanwhile, employees closed down the famous Louvre Museum, telling visitors that “the Mona Lisa is on strike” and arguing that Macron’s plan would “lower everyone’s pensions.”

The firefighters themselves are protesting the proposed retirement age changes and worsening conditions. “We are the final link in the chain of emergency aid in France and we are overwhelmed by call-outs,” said Frederic Perrin, head of the firefighters’ union. He continued, “We need the staffing and means to respond to this and also a guarantee that we can concentrate on our core missions, emergency response, and not serve as a supplement to absent health services.” The French government also gives danger money bonuses to certain professions. Firefighters are asking that their bonuses be raised to match those of the police.

Throughout the demonstrations this winter, firefighters have marched in full uniform with other striking groups, acting as a human shield in the belief that police would not attack their fellow first responders, who they work with closely every day. Yesterday’s footage proves that this belief was mistaken. The question that arises now is how the two services will interact now that one has attacked and undermined the other? This is just one of the many strains put on those who are tasked with crushing dissent in Macron’s new state.

Alan MacLeod is a Staff Writer for MintPress News. After completing his PhD in 2017 he published two books: Bad News From Venezuela: Twenty Years of Fake News and Misreporting and Propaganda in the Information Age: Still Manufacturing Consent. He has also contributed to Fairness and Accuracy in Reporting, The Guardian, Salon, The Grayzone, Jacobin Magazine, Common Dreams the American Herald Tribune and The Canary.