Those of us in Alternative Media and Anti-GeoEngineering movements have known for years about GeoEngineering programs taking place on a global scale.

There are thousands of hours of videos, reams of government reports, patents on file taken out by the participants of geoengineering and testimony from various individuals involved in said programs. Some testimony has been given in public and/or under oath, while other disclosures have been given covertly under penalty of lethal action as out-lined in a non-disclosure agreement.

If GeoEngineering is considered harmless or not even happening, then why are scientists, military and civilian contractors involved required to sign a Non-Disclosure? If GeoEngineering is for the ‘good of mankind’ why is there no transparency? Why is the subject saturated with mis-information and out-and-out Lies? One of the ‘biggest’ Lies: “GeoEngineering needs to be considered.” “More research is needed before GeoEngineering can be brought on line.”

Three answers come to mind immediately. Liability, Money and the over-riding Big Secret. It is well documented the harm geoengineering is causing to our air, food, water and health… a Hugh Liability. Another consideration is the Money to be made by people such as Al Gore, David Keith and all of the others mixed in and blended with the United Nations 2030 agenda that will provide the Cash Cow of carbon dioxide control and removal. The Power Elite is licking it’s chops at the thought of a Carbon Tax. Gore and his ilk are looking at making big bucks and the Universities are just drooling over the thought of “Research” grants to study something that, with one quick look up at the sky, is already happening.

Most Important is the Video at the bottom of  the main-stream University babble about GeoEngineering from Oxford. Once there we will tell you what the over-riding Big Lie is and why there is no transparency.

There is a wide range of geoengineering research being conducted at the University of Oxford.

Some of this research is being conducted by the Oxford Geoengineering Programme, while other research is funded through two EPSRC/NERC funded projects – SPICE and IAGP.

The OGP has provided ‘seedcorn’ funding to help stimulate small projects in the area of geoengineering at the University of Oxford. A call for proposals was made in 2011 and three projects were selected and are now underway.  These projects are in the areas of:

In addition to these projects OGP is engaged in three other research projects in areas of:

The OGP provides funding to two post-doctoral researchers whose work covers these three areas of research.

The Oxford Geoengineering Programme has announced the results of a funding round designed to encourage research into different aspects of geoengineering. Three diverse projects will each receive a share of £60,000 to conduct studies into the feasibility of large-scale intervention in the Earth’s natural systems to address climate change. The projects are:

Geoengineering raises questions of ethics and distributive justice.  Ethical questions concern humankind’s appropriate relationship with the non-human world.   People have different attitudes about what “natural” means and whether nature should be regarded primarily as a set of resources for human beings to use, or as an object of respect or reverence.  For example, some might object to geoengineering proposals because they may result in the “loss of the natural”.  For others, it might appear to be no different from any other kind of human interaction with the non-human world.

Questions of distributive justice concern how people should be treated, or what they are entitled to.  Climate change is likely to affect water supplies, food supplies, human health, and subject some regions to flooding and others to drought.  Geoengineering might help avert some of these outcomes.  However, as a large-scale intervention in the Earth’s physical, biological or chemical systems and cycles, it carries its own risk of adverse effects.  How should benefits and burdens of geoengineering technologies be distributed?   For example, how should people who are made worse off from the deployment of a geoengineering technology be compensated, and by whom?  Does it matter if the risks could not have been known at the time the decision was taken?  Can geoengineering technology be developed for commercial profit?

The only way to address these complex issues is to have a system of governance, in which discussion of these fundamental issues can take place.  To develop a system of governance we must consider: what institutions or actors should control any decision-making processes that might arise?   What does it mean to have a fair process for making decisions about geoengineering?  Who should be consulted and from whom is it necessary to gain consent?  How much weight should ethical objections and other factors carry?

Members of the Oxford Geoengineering Programme have continually emphasised the need for research and discussion on the questions of governance, even in the early days of the development of geoengineering technology.  Steve Rayner, Tim Kruger and Julian Savulescu, together with Catherine Redgewell (University College London) and Nick Pidgeon (University of Cardiff) submitted a set of five high-level principles for the governance of geoengineering research.  In brief, they are:

More details can be found here.

The Oxford Principles Authors welcome comments on these principles and suggestions for their development.

Over geological time, the weathering of silicate minerals on land to form limestone in the ocean is a natural climate stabilisation mechanism. We are investigating the potential of speeding this up by spreading crushed silicates onto the land surface. Weathering is enhanced in two ways 1) the surface area of the material is substantially enlarged by crushing and grinding which means that there is more material exposed to the environment. 2) Biological activity in soils naturally speeds up weathering as a way of extracting nutrients from minerals. Because there is large uncertainty in both of these areas, the feasibility of enhanced weathering is poorly understood.

Size reduction of rock requires a substantial amount of energy. The relationship between comminution and the geochemical properties of the crushed material is poorly understood. This relationship is critical to understanding the feasibility of enhanced weathering and ocean alkalinity enhancement. Therefore, we are developing a systematic approach through modelling and laboratory work to understand this relationship. 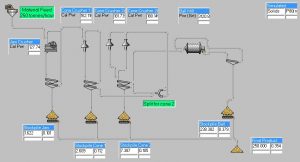 Analogous to their natural counterparts, the weathering of waste silicate material may be an important mechanism for drawing carbon dioxide out of the atmosphere. Understanding the geochemistry of this material could also inform the research on natural silicate weathering. Waste silicates are produced from a number of human processes including iron and steel manufacturing (slag), construction and demolition (concrete), cement manufacturing (cement kiln dust), coal combustion (fuel ash), and quarrying (quarry fines). The weathering of these materials in the environment may be able to offset some of the carbon emissions associated with manufacturing.

Now we uncover The Big Lie

I will share part of a message I received from TLB Founder Roger Landry as we were discussing the ins and outs of weather changes and related subjects. Roger said, “I am so freaking tired of the Global warming LIE … Yes America is heating up … Yes Canada is heating up etc… But NOT because of Global warming!”

I leave it to YOU to research and consider… Is GeoEngineering just a distraction from what is really going on? Are the Al Gores’ and the Science Professors of the world “in on the deal” and taking advantage of the situation to expand their riches under the guise of helping humanity? Are the Elites, armed with the knowledge of “The Big Lie” taking advantage of the Police/Political power of the United Nations and their own governments to securely ‘feather their own nest’ of Survival?

A final thought. It is time to stop just posting videos about what you see in the sky on social media and start giving energy to your activism that will wake up your fellow man. Matt Landman and what he is doing comes to mind as a good example.

Prepping for you and your family when the sledding gets rough is another consideration that Daisy Luther covers on a regular basis on her blog.

The Global Elite want to keep us confused and divided… It is their weapon of choice. Your choice is to take that weapon away. (RE) 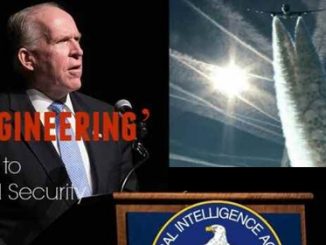 ‘Geoengineering’ is a Threat to National Security

The people have spoken and now the real work begins