German Chancellor Angela Merkel has suffered a crushing defeat. On Nov.20, she informed the president of her failure to form a coalition government. This is a shock for Germany with its postwar record of government stability and political consensus and the entire Europe as well.

For the first time in her 12 years as chancellor, Angela Merkel is unable to exercise power. Germany’s Free Democrats (FDP) have called off coalition talks with her CDU/CSU bloc and the Greens. According to Christian Lindner, the party’s leader, “no basis for trust and a shared idea” has been found. Angela Merkel will remain acting chancellor, but the prospects of forming a new coalition government are dim.

Among the core differences is the issue of refugee and asylum policy and, in particular, the issue of whether refugees should be allowed to bring their families to Germany. In 2016, the right was suspended. But the freeze runs out next year, raising the prospect of a spike in migrant flows. The idea of family reunification is supported by Greens. The Christian Social Union in Bavaria (CSU) is on the way to toughen its position on allowing in new migrants. 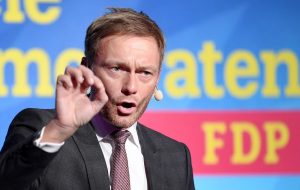 Russia is also an issue of discord. Christian Lindner (pictured), the leader of Germany’s Free Democratic Party (FDP) opposes Merkel’s stance on the relationship with that country. He believes that “The security and prosperity of Europe depends on its relationship with Moscow.” According to him, the issue of Crimea should be set aside for the moment in order to make progress in other areas. German President Frank-Walter Steinmeier has also voiced his support for improvement of the ties with Moscow. The voices are being heard in Germany calling for easing the Russia sanctions, which destroy German businesses. Dozens of German companies have already gone bankrupt because of the punitive measures.

Before the September elections in Germany, representatives of all many political parties, including the AfD, the Left-wing party (Die Linke), and the German Social Democratic Party (SPD) declared that improving relationships with Moscow was important for them, calling for at least a partial lifting of sanctions against it. The SPD described Russia as a key country for security and peace in Europe and those goals may be achieved 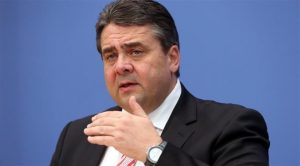 “exclusively jointly with Russia, rather than beside or against it”. Sigmar Gabriel (pictured), the head of German diplomacy and influential SPD politician, believes that the expectation of a full implementation of the Minsk arrangements is “illusionary” and sanctions should already be lifted in the situation in which the truce in Eastern Ukraine is maintained.

Even the Bavarian CSU, the chancellor’s closest ally and partner, believes that “sanctions against Russia must not continue permanently” and Germans must “build bridges to Russia”. Accordingly, the CSU wants to develop a schedule for lifting the sanctions, which would be “waived alongside the gradual entry into force of the Minsk provisions”. German direct investments in Russia are growing to reach $312 million in the first quarter of 2017. It significantly exceeded the total volume of German investments in 2016, which amounted to $225 million. Over 5,500 companies with the German capital are operating in Russia. Lifting the sanctions against Moscow could eliminate an irritant in Germany’s relationship with other EU members.

Angela Merkel could choose to enter talks with just the Greens to form a minority government. The Christian Democrats could also try to make an arrangement with them, but the chance is slim as the SPD has repeatedly reaffirmed that its role in the parliament will be in opposition. Even if an agreement is reached, the country would have a weak government with murky future. Normally, such minority coalitions don’t last long.

The situation raises the prospect of new elections. This is the most probable scenario, unless the Christian Democrats can entice the FDP back to the table in the days ahead, which is unlikely. A return to the polls in early 2018 is a chance for the right wing Alternative for Germany (AfD) to score an even better result than it achieved two months ago with almost 13 percent of the vote. A new election hardly bodes well for the parties that failed to agree on a coalition. And now the main thing – if a new election is announced, the Christian Democrats are likely to be led by another leader. After all, nobody else but Angela Merkel is responsible for the problem of migrants, which has divided the country, the failure of the party to win at least 40 percent of the vote in the September election, and the recent failure to form a ruling coalition.

Whatever the outcome, the days of Angela Merkel as the strong leader of the EU are gone. Once dubbed the «Queen of Europe», she has passed her zenith and is standing on shaky ground now. With irritation caused by the immigration policy growing across Europe, many people in Germany and other European countries remember who is responsible for the EU’s woes. French President Macron is better positioned to lead the European Union as the German chancellor’s turn at the top appears to be coming to an end. The balance is in France’s favor. The end of Merkel’s era is in sight.

Alex Gorka is a defense and diplomatic analyst