The Senate Judiciary Committee has referred an individual to the FBI/DOJ for criminal investigation after for potential “materially false statements” about US Supreme Court nominee Brett Kavanaugh.

On Monday, Jeff Catalan of Newport, RI called Sen. Sheldon Whitehouse’s office with “allegations concerning a rape on a boat in August of 1985,” according to a transcript of the phone call.

Catalan claimed that in 1985, “a close acquaintance of the constituent was sexually assaulted by two heavily inebriated men she referred to at the time as Brett and Mark,” reported CNN, citing the transcript and noting that the incident reportedly took place on a boat in Newport harbor. After Catalan’s friend learned about the assault, “he and another individual went to the harbor, located the boat the victim had described and physically confronted the two men, leaving them with significant injuries,” the report notes.

Whitehouse, a member of the Judiciary Committee, asked Kavanaugh about the incident Tuesday, which Kavanaugh denied.

“No,” Kavanaugh said in a phone call with the Committee. “I was not in Newport, haven’t been on a boat in Newport. Not with Mark Judge on a boat, nor all those three things combined. This is just completely made up, or at least not me. I don’t know what they’re referring to.”

After a transcript of the call was released, Catalan recanted over Twitter, saying “Do everyone who is going crazy about what I had said I have recanted because I have made a mistake and apologize for such mistake.”

Over an hour after Catalan recanted, CNN ran a story that included his accusation but not his recanting. Three hours later, they updated their story to include his backpedal.

A statement from the Judiciary Committee reads:

“One tip was referred to the committee by staff for Sen. Sheldon Whitehouse (D-R.I.). While Whitehouse referred the accuser to a reporter, the committee took the claim seriously and questioned Judge Kavanaugh about the allegations under penalty of felony. Judge Kavanaugh denied any misconduct. After the transcripts of that interview became public, the individual recanted the claims on a social media post,” reads a statement by the Judiciary Committee.

“…when individuals provide fabricated allegations to the Committee, diverting Committee resources during time-sensitive investigations, it materially impedes our work. Such acts are not only unfair; they are potentially illegal. It is illegal to make materially false, fictitious, or fraudulent statements to Congressional investigators. It is illegal to obstruct Committee investigations,” Grassley says in the letter. 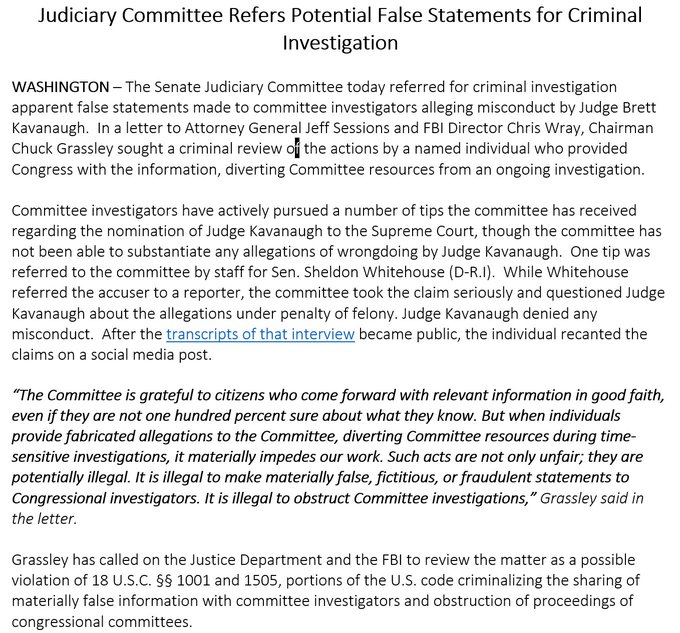 (TLB) published these articles, as compiled by Tyler Durden at ZeroHedge, with our thanks for the coverage.

Is Attorney General Barr a coward? [A Jon Rappoport commentary]

Assange Has Spent 1,000 Days In The “Harshest Prison In UK”

Texas Gov. Abbott to fine Local Governments that order Texans to Mask Up