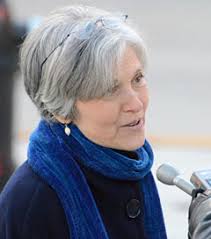 When’s the last time you heard from 2016 Green Party presidential candidate Jill Stein? When she’s not getting arrested for vandalizing construction equipment at the Dakota Access Pipeline she needs to find other ways to keep herself in the news. This week those efforts took the form of stopping by at MSNBC for an interview with Alex Witt. In it, the subject of foreign policy came up and Stein [pictured here] gave us a peek at what our position toward Kim Jong-un would have been had she been elected. It turns out that the diminutive dictator has been getting a bad rap in the American press and Stein is tired of seeing North Korea “demonized.”

“The demonization of North Korea is part of the run-up to regime change. she said.” “It’s part of demonizing a government that we then want to exercise regime change on.”

Host Alex Witt pushed back against Stein’s accusation saying, “It’s the North Koreans that have added the provocation in launching missiles and testing….”

Wait… we conducted “nuclear bombing runs” against North Korea? Did I miss both a headline and a mushroom cloud somewhere along the way? It’s true that we used to have some nukes in South Korea, but George H.W. Bush moved them out near the end of his term in 1991 as part of an effort to persuade the North to give up their own ambitions along those lines. (In hindsight that probably didn’t pan out very well.)

But more to the point, how can anyone in their right mind claim that it’s even possible to “demonize” Kim Jong-un? The guy is about as close to an actual demon as anything we’ve got roaming the planet at the moment. There’s no question that regime change in North Korea would be seen as a good thing by the United States (I mean, how much worse could the next guy actually be?) but it’s not as if we have many viable options to replace Kim without a disastrous, bloody war.

Stein didn’t stop with her defense of Kim Jong-un, though. You know who else has been unfairly smeared in the press? Vladimir Putin.

“Sanctions basically play into Russia’s hand. we know that sanctions only strengthen a leader like Putin and make him the protector against the evil United States,” she said.

Then she seemingly sided with the Trump administration and said that Russian involvement in email hacks was purely speculation.

“The evidence is not definitive, it’s circumstantial,” she said.

Thankfully Stein never got anywhere near the point of even landing a single electoral vote in the presidential race, but it says something about the state of the far left that the Green Party was even willing to field her. Stein is a loon. There’s just no other way to describe it. And the more time she spends on the national stage, the less stable she appears.

Hey… on second thought, maybe the Democrats should consider running her in 2020. Something to ponder anyway.

TLB republished this article by JAZZ SHAW from where it first appeared at HotAir.com