Hillary Clinton has responded to the accusations that she paid a tech executive to spy on the Trump administration, writing in a Wednesday tweet: “Trump & Fox are desperately spinning up a fake scandal to distract from his real ones. So it’s a day that ends in Y,” adding “The more his misdeeds are exposed, the more they lie.”

Clinton then points people to a Vanity Fair article “debunking” the claims.

Trump & Fox are desperately spinning up a fake scandal to distract from his real ones. So it’s a day that ends in Y.

The more his misdeeds are exposed, the more they lie.

For those interested in reality, here’s a good debunking of their latest nonsense.https://t.co/iYY8Uxuogx

Which prompted much mockery on social media… 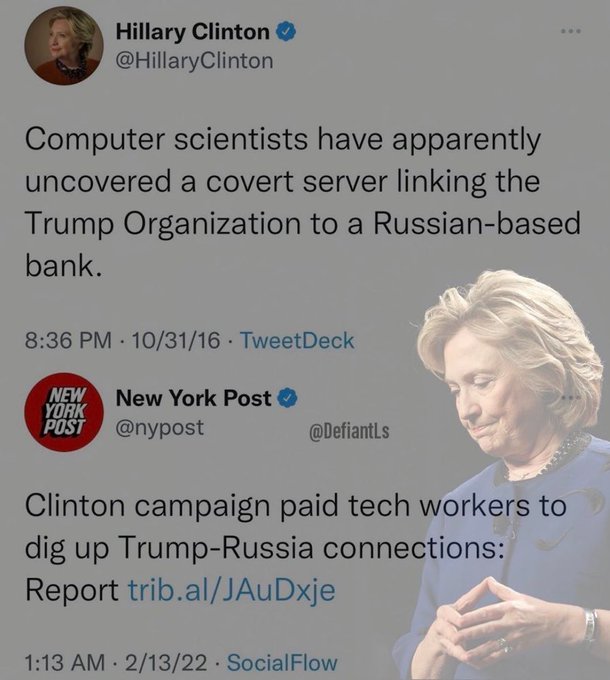 As Glenn Greenwald opines, “Hillary Clinton’s lawyer has been criminally indicted by the Durham probe for lying to the FBI about Russiagate/Alfa Bank. An FBI lawyer pled guilty to lying to the FISA court to spy on Carter Page. Nothing Hillary or Dems’ media servants can say will ever negate these facts.”

After which he added:

“I also love how the article Hillary encourages everyone to read to clear everything up about the Durham indictment of her lawyer is a 5-paragraph clichéd-driven partisan screed in Vanity Fair by a standard DNC-loyal liberal: as if it’s some complex legalistic dissection.

As The Epoch Times’ Zachary Stieber detailed earlier, a technology executive accused of wrongdoing and a lawyer who worked for Hillary Clinton’s campaign hit back Feb. 15 after Special Counsel John Durham laid out new detailed allegations against them.

Michael Sussman in an undated interview. (CNN/Screenshot via NTD)
.

Durham, who is probing the origins of the counterintelligence investigation against Donald Trump’s campaign, said in a recent court filing that a tech executive spied on the White House for the purpose of “gathering derogatory information about Donald Trump.” It’s believed the spying took place while Trump was president.

Though Durham did not name the executive, he has been identified by media outlets including The Epoch Times as Rodney Joffe, who until recently headed a U.S.-based company called Neustar. Joffe once said he was offered a top position in a Clinton administration, provided Clinton—whom Trump beat in the 2016 election—became president.

A spokesperson for Joffe, who has not been charged with a crime, challenged Durham’s filing in a statement to news outlets.

“Contrary to the allegations in this recent filing, Mr. Joffe is an apolitical Internet security expert with decades of service to the U.S. Government who has never worked for a political party, and who legally provided access to DNS data obtained from a private client that separately was providing DNS services to the Executive Office of the President (EOP),” the spokesperson said.

DNS refers to domain name system; Durham says Joffe exploited access to DNS internet traffic for not only the executive office but Trump Tower and Trump’s nearby apartment, and that Joffe had a group of university researchers explore internet data with the goal of establishing “an inference” and “narrative” tying Trump to Russia. Joffe, Durham said, was trying to “please certain ‘VIPs.’”

“Under the terms of the contract, the data could be accessed to identify and analyze any security breaches or threats,” Joffe’s spokesperson said. “As a result of the hacks of EOP and DNC servers in 2015 and 2016, respectively, there were serious and legitimate national security concerns about Russian attempts to infiltrate the 2016 election. Upon identifying DNS queries from Russian-made Yota phones in proximity to the Trump campaign and the EOP, respected cybersecurity researchers were deeply concerned about the anomalies they found in the data and prepared a report of their findings, which was subsequently shared with the CIA.”

Durham said his team has “identified no support for” the allegations that the data reflected suspicious DNS lookups by internet addresses affiliated with a Russian mobile phone provider, or Yota.

Lawyers for Michael Sussman, the Clinton campaign lawyer who has been charged with lying to the FBI, also responded Monday to the Durham filing.

They argued that Durham’s motion, which was ostensibly about potential conflicts of interest, included “prejudicial—and false—allegations that are irrelevant to his motion and to the charged offense, and are plainly intended to politicize this case, inflame media coverage, and taint the jury pool.”

The allegations pertaining to the DNS traffic, for instance, were not included in Sussman’s indictment and “were not necessary to identify any of the potential conflicts of interest with which the motion is putatively concerned,” they added. “Why then include them? The question answers itself.”

Sussman wants the court to strike the portion of the motion that outlines the allegations against Joffe and to allow him to retain his counsel, Latham & Watkins, a law firm that has represented other parties that are being or have been investigated by Durham.

Hillary Clinton’s Strategic Ambition In A Nutshell. “Regime Change” in Russia… Putin is an Obstacle