The Foreign Intelligence Surveillance Act (FISA) court slammed the FBI on Tuesday in a rare public statement over the agency’s handling of former Trump campaign aide Carter Page’s warrant application and subsequent renewals, according to the Wall Street Journal.

“In order to appreciate the seriousness of that misconduct and its implications, it is useful to understand certain procedural and substantive requirements that apply to the government’s conduct of electronic surveillance for foreign intelligence purposes,” reads the statement.

The punchline: “The FBI’s handling of the Carter Page applications, as portrayed in the OIG report, was antithetical to the hieghtned duty of candor” required by federal investigators, adding “The frequency with which representations made by FBI personnel turned out to be unsupported or contradicted by information in their possession, and with which they withheld information detrimental to their case, calls into question whether information contained in other FBI applications is reliable,” wrote the court, which called the recent watchdog report from the DOJ’s Inspector General “troubling.”

The court ordered the government, by January 10, 2020, to explain what steps it’s was taking to prevent such lapses in the future.

No mention of individual accountability. 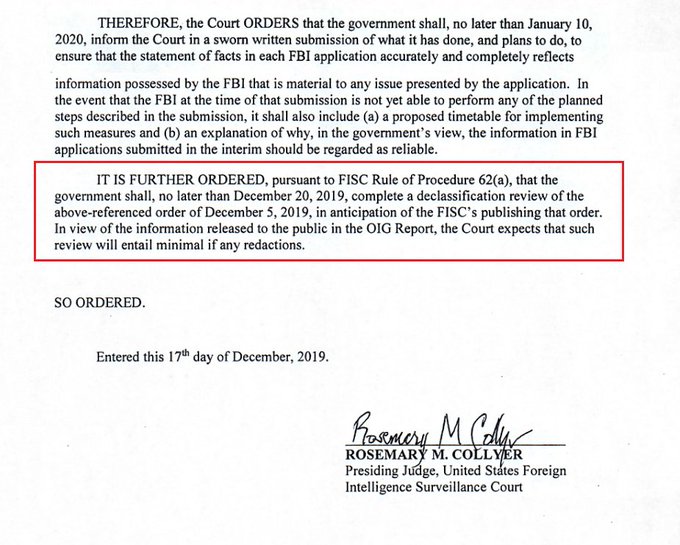 2:47 PM – Dec 17, 2019
Former FBI Director James Comey admitted on Fox News Sunday that he was “overconfident in the procedures that the FBI and Justice had built over 20 years,” adding “It’s incredibly hard to get a FISA. I was overconfident in those because he’s right, there was real sloppiness. Seventeen things that either should have been in the applications or at least discussed and characterized differently. It was not acceptable, so he’s right, I was wrong.”
.

Will Biden Sanction Half the World to Isolate Russia?

Trump clashes with Fauci over US reopening