Israel Kills 28, Injures 900 In Gaza As Palestinians Protest Opening Of US Embassy In Jerusalem

The Israeli military continued its violent repression of Palestinian protesters on Monday when soldiers once again gunned down unarmed demonstrators whom it claimed were trying to penetrate the border fence separating Israel from the Gaza Strip.

According to Italian newspaper Il Sole 24 Ore, Israeli soldiers said they were “provoked into violence” when small groups of Palestinians began throwing stones at IDF soldiers from the other side of the border fence. The soldiers responded by gunning down demonstrators; by the time the demonstrations had quieted down, at least 28 Palestinians had been killed, andanother 600 had been wounded, according to the Hamas-controlled Health Ministry.

The Wall Street Journal reported that a 12-year-old and a 14-year-old had been counted among the dead.

At least 10,000 Palestinians had gathered early Monday local time along more than 10 locations along the border fence, which is one of several closed borders that has effectively cut off Gaza from the rest of the world (though Hamas has been known to dig tunnels to help people move in and out of the territory), Il Sole 24 Ore reported.

The international community has widely condemned President Trump’s decision to move the US embassy to Jerusalem (though, as Trump has correctly pointed out, every US president since at least Bill Clinton had promised to move the embassy). The UK reiterated Monday that it doesn’t intend to move its embassy, adding that it doesn’t agree with President Trump’s decision.

Since late March, Hamas has been organizing protests along the border fence as part of six weeks of protests meant to demand the long-sought “right of return” for Palestinians who were forced off their land by Jewish settlers during the genesis of the Israeli state.

The IDF has blamed Hamas, which controls Gaza’s government – of instigating the “March of Return” protests with the intention of ultimately breaching the border fence, something that the army says would threaten Israeli towns near the border.

On Sunday, Israel dropped leaflets throughout Gaza warning Palestinians to stay away from the border fence. They also accused Hamas of “stealing your money and using it to dig tunnels at your expense.”

A few minutes ago, IDF jets once again distributed leaflets warning against approaching the security fence, attempting to sabotage it or to carry out terror attacks pic.twitter.com/dJcBcUYiiz

This is what is written on the leaflets pic.twitter.com/s88z1P83QM 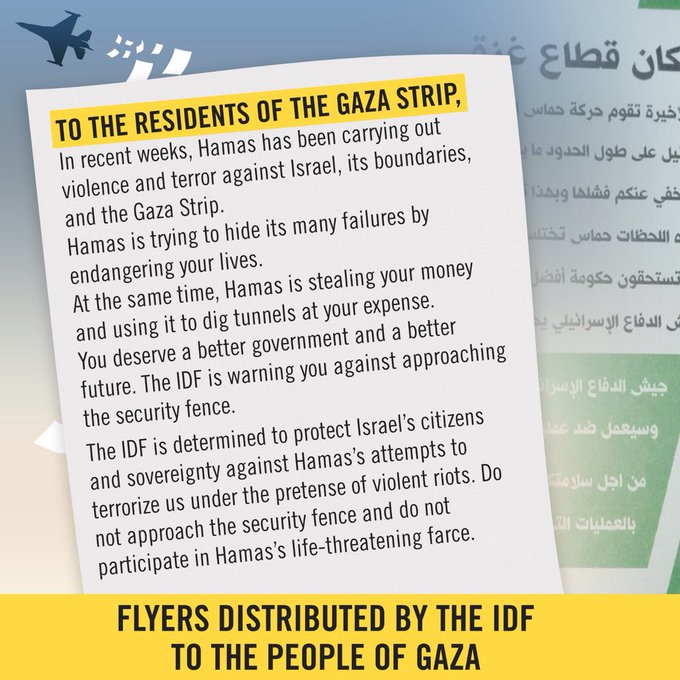 Ruptly is broadcasting a live feed from the Gaza side of the border, where demonstrators could still be seen milling about amid clouds of smoke – though the protest had largely subsided.

On Monday, Israel is celebrating its 70th Independence Day. However, among Palestinians – many of whom are descendants of the Arabs who were forced off their land by the Israelis – the anniversary is known as the Nakba, or “catastrophe”.

In a series of tweets, the IDF accused Hamas of leading a “terrorist operation under the cover of the masses throughout Gaza” and said the army would “destroy Hamas infrastructure, which was intended to be used as forward operating bases for terrorist activity today and tomorrow.”

The IDF added that, should Hamas succeed in breaching the border, Palestinians would threaten thousands of Israeli lives. 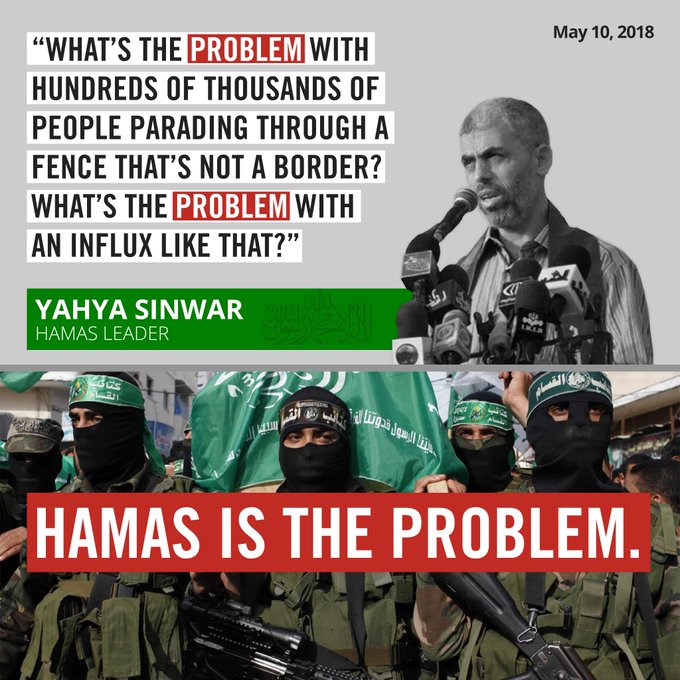 Hamas is leading a terrorist operation under the cover of the masses throughout Gaza. According to Hamas’ declarations & IDF intelligence, Hamas ultimately intends to carry out terror attacks, including a mass infiltration

Around 10,000 violent rioters are currently assembled along the security fence & thousands more are approximately 0.3mi away from the security fence. IDF troops are operating in accordance with standard procedures

Overnight, IDF troops operated along the security fence in order to destroy Hamas infrastructure, which was intended to be used as forward operating bases for terrorist activity today & tomorrow. The operation was a defined & precise effort

The IDF is prepared for a variety of scenarios. IDF commanders are present in the field & are conducting situation assessments. The IDF will act forcefully against any terrorist activity & will operate to prevent attacks against Israelis

Of course, Gaza isn’t the only area where tensions were flaring. As we pointed out yesterday, Israeli police swarmed Jerusalem’s Old City to try and stop radical Jewish settlers from storming Islam’s third-holiest site, the Al-Aqsa Mosque, and raise Israel’s flag over the monument.

“Hundreds of settlers stormed the compound along with a large Israeli police force,” Firas al-Dibis, a Palestinian official who oversees the city’s Islamic religious sites said in a statement.

U.S. Embassy opening in Jerusalem will be covered live on @FoxNews & @FoxBusiness. Lead up to 9:00 A.M. (eastern) event has already begun. A great day for Israel!

President Trump tweeted Monday morning that the opening of the US embassy in Jerusalem would be covered live on Fox News beginning at 9 am. Treasury Secretary Steven Mnuchin was in Jerusalem for the occasion. In recognition of Trump’s decision to move the embassy despite widespread international outrage, one of Israel’s top football teams announced Sunday night that it would rename itself in honor of President Trump.

According to the Mirror, Beitar Jerusalem said it would now be called Beitar Trump Jerusalem.

(TLB) published this report from ZeroHedge where it was compiled by Tyler Durden.