If there’s any justice in the world, the WaPo will be sued out of existence

There is a concerted effort to bury this story, as it exposes the hypocrisy and insanity of a significant portion of the population. And trust me, they don’t like being exposed to their insanity, as the ensuing cognitive dissonance prevents any and all rational thought. 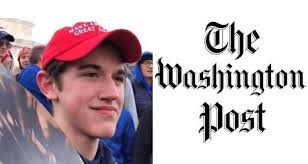 The initial decision from the judge in this case to toss it out in July was a massive miscarriage of justice.

It’s EXTREMELY unusual for a judge to overturn HIS OWN decision in such a high profile case like this…in some ways it’s unprecedented.

Allegedly, the judge did not see all of the damning evidence and this prompted the reversal of the decision.

This means that [Nick] Sandmann’s lawyers were going to appeal, and the judge realized that his initial ruling was a bad one, and therefore his decision to reopen is meant for him to save face once Sandmann wins the case.

Hopefully, we can put this absolutely absurd and disturbing incident behind us as a society.

Only the most corrupt and despicable civilization would entertain the notion of dogpiling on a child over actual MSM propaganda, and then issue death threats without compunction or reversal.

It’s insane what happened to Nick Sandmann, and anyone who still harbors ill will towards this child is a disgusting and warped human being.

The Injustice of the Covington Kid’s WaPo Defamation Suit Dismissal

In a nutshell, a Native American activist walked up to a kid at a rally who was wearing a MAGA hat. The kids were at the end of a field trip and were waiting for their teachers to bring them back.

Then the Native American activist told the media that the kid (Nicholas Sandmann) had aggressively blocked his path and was extremely threatening and menacing.

Sadly, the Mockingbird propaganda Media ran with these unfounded accusations, and they proceeded to plaster Sandmann’s smiling face over every news outlet for the next 24-48 hours.

Incredibly, actual celebrities were calling for Sandmann’s assault and MURDER on Twitter and elsewhere.

I have never seen a more shocking and disturbing example of a mob mentality in the world of social media before. It was unprecedented, ESPECIALLY because the entire narrative was a LIE.

Fast forward a few months and Sandmann is suing the WaPo and other outlets for defamation.

In a temporary miscarriage of justice, the judge initially threw out the case.

However, apparently the judge has now seen more evidence that compelled him to reopen the case.

One of the most extraordinary aspects of the initial dismissal was that the judge said that the WaPo article didn’t specifically mention Sandmann…however the lawyer I linked and many others cried foul on this interpretation, as the articles literally PLASTERED Sandmann’s face on the front page.

Can you believe the hubris and insanity of news outlets like the WaPo for daring to make such an argument? “Oh this story isn’t about Sandmann…but hey we’re going to use a picture of his face to plaster all over it.”

(TLB) published this article from IWB with our appreciation for the coverage.

Related articles about Nick from The Liberty Beacon

Another failure of the COVID diagnostic test

This is how you get an actual civil war, America [Video]