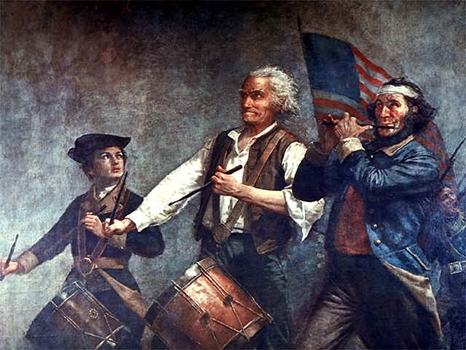 “The greatness of America lies in the right to protest for right.”—Martin Luther King Jr.

Everything this nation once stood for is being turned on its head.

Indeed, I’m having a hard time reconciling the America I know and love with the America being depicted in the daily news headlines, where corruption, cronyism and abuse have taken precedence over the rights of the citizenry and the rule of law.

What kind of country do we live in where it’s acceptable for police to shoot unarmed citizens, for homeowners to be jailed for having overgrown lawns (a Texas homeowner was actually sentenced to 17 days in jail and fined $1700 for having an overgrown lawn), for kids to be tasered and pepper sprayed for acting like kids at school (many are left with health problems ranging from comas and asthma to cardiac arrest), and for local governments to rake in hefty profits under the guise of traffic safety (NPR reports that police departments across the country continue to require quotas for arrests and tickets, a practice that is illegal but in effect)?

Why should we Americans have to put up with the government listening in on our phone calls, spying on our emails, subjecting us to roadside strip searches, and generally holding our freedoms hostage in exchange for some phantom promises of security?

As I document in my new book Battlefield America: The War on the American People, it doesn’t matter where you live—big city or small town—it’s the same scenario being played out over and over again in which government agents ride roughshod over the rights of the citizenry.

And then there were the three California high school public school students who were ordered to turn their American flag t-shirts inside out on May 5 (Cinco de Mayo) because school officials were afraid it might cause a disruption and/or offend Hispanic students. Incredibly, the U.S. Supreme Court actually sided with the school and the Ninth Circuit Court of Appeals, affirming that it might be disruptive for American students to wear the American flag to an American public school.

While there are all kinds of labels being put on so-called “unacceptable” speech today, from calling it politically incorrect and hate speech to offensive and dangerous speech, the real message being conveyed is that Americans don’t have a right to express themselves if what they are saying is unpopular, controversial or at odds with what the government determines to be acceptable.

Whether it’s through the use of so-called “free speech zones,” the requirement of speech permits, the policing of online forums, or a litany of laws and policies that criminalize expressive activities, what we’re seeing is the caging of free speech and the asphyxiation of the First Amendment.

Long before the menace of the police state, with its roadside strip searches, surveillance drones, and SWAT team raids, it was our First Amendment rights that were being battered by political correctness, hate crime legislation, the war on terror and every other thinly veiled rationale used to justify censoring our free speech rights.

By suppressing free speech, the government is contributing to a growing underclass of Americans who are being told that they can’t take part in American public life unless they “fit in.” Mind you, it won’t be long before anyone who believes in holding the government accountable to respecting our rights and abiding by the rule of law is labeled an “extremist”and is relegated to an underclass that doesn’t fit in and must be watched all the time.

It doesn’t matter how much money you make, what politics you subscribe to, or what God you worship: we are all potential suspects, terrorists and lawbreakers in the eyes of the government.

In other words, if and when this nation falls to tyranny, we will all suffer the same fate: we will fall together. However, if it is possible to avert such an outcome, it will rest in us remembering that we are also all descendants of those early American revolutionaries who pushed back against the abuses of the British government. These people were neither career politicians nor government bureaucrats. Instead, they were mechanics, merchants, artisans and the like—ordinary people groaning under the weight of Britain’s oppressive rule—who, having reached a breaking point, had decided that enough was enough.

The colonists’ treatment at the hands of the British was not much different from the abuses meted out to the American people today: they too were taxed on everything from food to labor without any real say in the matter, in addition to which they had their homes invaded by armed government agents, their property seized and searched, their families terrorized, their communications, associations and activities monitored, and their attempts to defend themselves and challenge the government’s abuses dismissed as belligerence, treachery, and sedition.

Unlike most Americans today, who remain ignorant of the government’s abuses, cheerfully distracted by the entertainment spectacles trotted out before them by a complicit media, readily persuaded that the government has their best interests at heart, and easily cowed by the slightest show of force, the colonists responded to the government’s abuses with outrage, activism and rebellion. They staged boycotts of British goods and organized public protests, mass meetings, parades, bonfires and other demonstrations, culminating with their most famous act of resistance, the Boston Tea Party.

On the night of December 16, 1773, a group of men dressed as Indians boarded three ships that were carrying tea. Cheered on by a crowd along the shore, they threw 342 chests of tea overboard in protest of a tax on the tea. Many American merchants were aghast at the wanton destruction of property. A town meeting in Bristol, Massachusetts, condemned the action. Ben Franklin even called on his native city to pay for the tea and apologize. But as historian Pauline Maier notes, the Boston Tea Party was a last resort for a group of people who had stated their peaceful demands but were rebuffed by the British: “The tea resistance constituted a model of justified forceful resistance upon traditional criteria.”

The rest, as they say, is history. Yet it’s a history we cannot afford to forget or allow to be rewritten.

The colonists suffered under the weight of countless tyrannies before they finally were emboldened to stand their ground. They attempted to reason with the British crown, to plea their cause, even to negotiate. It was only when these means proved futile that they resorted to outright resistance, civil disobedience and eventually rebellion.

More than 200 years later, we are once again suffering under a long train of abuses and usurpations. What Americans today must decide is how committed they are to the cause of freedom and how far they’re willing to go to restore what has been lost.

Nat Hentoff, one of my dearest friends and a formidable champion of the Constitution, has long advocated for the resurgence of grassroots activism. As Nat noted:

This resistance to arrant tyranny first became part of our heritage when Samuel Adams and the Sons of Liberty formed the original Committees of Correspondence, a unifying source of news of British tyranny throughout the colonies that became a precipitating cause of the American Revolution. Where are the Sons of Liberty, the Committees of Correspondence and the insistently courageous city councils now, when they are crucially needed to bring back the Bill of Rights that protect every American against government tyranny worse than King George III’s? Where are the citizens demanding that these doorways to liberty be opened … What are we waiting for?

What are we waiting for, indeed?

Eat Popcorn As Democrats Eat Themselves