Longtime former director of security for the Senate Intelligence Committee, James A. Wolfe, was indicted and arrested Thursday night on charges of giving false statements to FBI agents in 2017 about repeated contacts with three reporters, according to the Washington Examiner.

Jim Wolfe, a longtime former director of security at the Senate Intelligence Committee, was indicted and arrested Thursday night for giving false statements to F.B.I. agents during their investigation into leaks of classified information to the media.

According to the Department of Justice, Wolfe lied to F.B.I. agents back in 2017 “about his repeated contacts with three reporters, including through his use of encrypted messaging applications.” 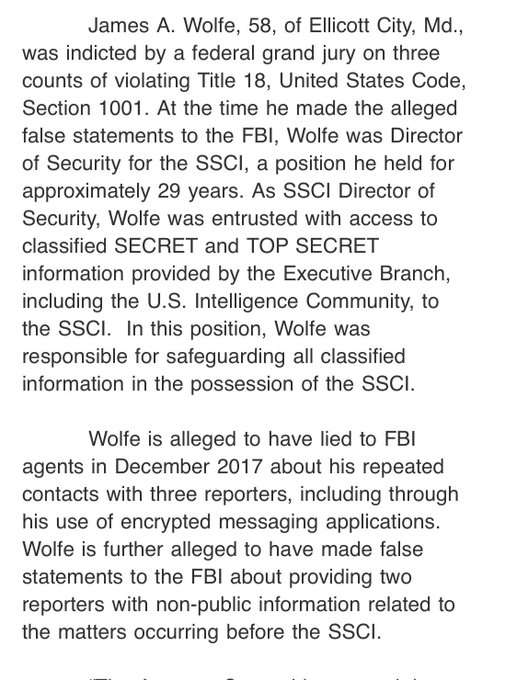 Wolfe, 57, is a former Army intelligence analyst who worked for the Senate for over 30 years. He stopped performing work for the committee in December and retired last month. More from the NYT:

Court documents describe Mr. Wolfe’s communications with four reporters, using encrypted messaging applications. It appeared that the F.B.I. was investigating how Ms. Watkins learned that Russian spies in 2013 had tried to recruit Carter Page, a former Trump foreign policy adviser. She published an article for BuzzFeed News on April 3, 2017, about the attempted recruitment of Mr. Page in which he confirmed the contacts.

In another case, the indictment said, Mr. Wolfe used an encrypted messaging app to alert another reporter in October 2017 that he had served Mr. Page with a subpoena to testify before the committee. The reporter, who was not named, published an article disclosing that Mr. Page had been compelled to appear. After it was published, Mr. Wolfe wrote to the journalist to say, “Good job!” and, “I’m glad you got the scoop,” according to court papers.

The same month, Mr. Wolfe reached out to a third reporter on the same unidentified app to offer to serve as an unnamed source, the documents said.

Mr. Wolfe also communicated with a fourth reporter, using his Senate email account, from 2015 to 2017, prosecutors said. They said he denied those contacts.

“Mr. Wolfe’s alleged conduct is a betrayal of the extraordinary public trust that had been placed in him. It is hoped that these charges will be a warning to those who might lie to law enforcement to the detriment of the United States,” said Assistant Attorney General John. Demers

News of Wolfe’s arrest follows an article by the New York Times which claims that the Department of Justice “secretly seized years’ worth of a New York Times reporter’s phone and email records,” in connection with an investigation into classified leaks.

NYT national security reporter Ali Watkins [Pictured here] – formerly of Buzzfeed and Politico, came under investigation as part of a DOJ inquiry into Wolfe. FBI agents approached Watkins about her relationship with Wolfe while investigating unauthorized leaks – the first known instance of the Justice Department seizing a reporter’s data under President Trump.

Watkins claims that Wolfe was not a source of classified information during their relationship.

A prosecutor notified Ms. Watkins on Feb. 13 that the Justice Department had years of customer records and subscriber information from telecommunications companies, including Google and Verizon, for two email accounts and a phone number of hers. Investigators did not obtain the content of the messages themselves. The Times learned on Thursday of the letter, which came from the national security division of the United States attorney’s office in Washington. –New York Times

Attorney General Jeff Sessions said last year that the DOJ was aggressively pursuing around three timx as many leak investigations as were open at the end of Obama’s second term – while Obama’s DOJ prosecuted more leaks than all previous administrations combined.

The seizure — disclosed in a letter to the reporter, Ali Watkins — suggested that prosecutors under the Trump administration will continue the aggressive tactics employed under President Barack Obama.

When law enforcement officials obtained journalists’ records during the Obama administration, members of Congress in both parties sounded alarms, and the moves touched off such a firestorm among advocates for press freedom that helped prompt the Justice Department to rewrite its relevant guidelines. -NYT

In early 2013, for example, the Obama DOJ led by Attorney General Eric Holder secretly obtained the home and cell phone numbers of individual AP journalists, in what the news agency called a “serious interference with AP’s constitutional rights to gather and report the news.”

“It’s always disconcerting when a journalist’s telephone records are obtained by the Justice Department — through a grand jury subpoena or other legal process,” said Ms. Watkins’s personal lawyer, Mark J. MacDougall toThe Times. “Whether it was really necessary here will depend on the nature of the investigation and the scope of any charges.”

Press advocates have long considered the idea of mining a journalist’s records to be an intrusion of First Amendment freedoms – one which federal prosecutors at the DOJ acknowledge must be dealt with delicately. “Freedom of the press is a cornerstone of democracy, and communications between journalists and their sources demand protection,” said Eileen Murphy, a Times spokeswoman.

(TLB) published this story from ZeroHedge, as compiled by Tyler Durden. Our appreciation to Tyler for the availability.

Government Eyes Are Watching You: We Are All Prisoners of the Surveillance State