Over 100 Migrants Dropped Off Outside Kamala Harris’ DC Home

Over 100 illegal migrants who were picked up in Eagle Pass, Texas were dropped off outside Vice President Kamala Harris’ residence at the Naval Observatory in Washington DC on Thursday.

The group was sent to DC by Texas Gov. Greg Abbott, and includes migrants from Venezuela, Columbia, Uruguay and Mexico.

BREAKING: Two buses of 101 migrants mostly from Venezuela arrive outside @VP Harris house in DC sent by @GregAbbott_TX – one migrant telling me he believes the border is “open” @FoxNews pic.twitter.com/Q70utdE4k0

A representative from NGO ‘Sanctuary DMV’ appeared on scene and told the migrants that they would be going to a local church.

“We’ve already set up a church and a location — a safe location for them to tell us where they need to go next, where they have relatives,” said representative Carla Bustillos. “I was surprised to see [the press] here before we could get here. So the press knew the location before we did, some of the volunteers… it’s very frustrating.”

Illegal Immigrant after being bussed from Texas to Kamala Harris’ House by Gov. Greg Abbott:

“THE BORDER IS OPEN”

Abbott has argued that Texas border towns are overwhelmed with migrants, and that those in DC, New York and other Democratic ‘sanctuary cities’ should face the realities of the border crisis.

Kamala Harris’ Secret Service agents tell reporters that they need make sure “everyone is safe and AWAY FROM OUR FENCE” pic.twitter.com/HZp0m6rYYe

According to Ranae Eze, press secretary for Texas Gov. Greg Abbot, Bowser is a hypocrite.

“In a city with a population over 700,000, she’s claiming an emergency for just over 7,900 migrants being bused into her sanctuary city,” Eze told the Epoch Times. “That’s barely 1 percent of the population of Washington, D.C. The true emergency is on our nation’s southern border—not in our nation’s capital—where small Texas border towns are overrun and overwhelmed by hundreds of migrants every single day as the Biden Administration dumps them in their communities.

“Instead of fearmongering and complaining about a few thousand migrants in her sanctuary city, Mayor Bowser should call on President Biden to do his job and secure the border—something the President continues failing to do. Governor Abbott’s invitation is still open for Mayor Bowser to visit the border and see the actual crisis firsthand.”

Why is Martha’s Vineyard so upset about becoming enriched by diversity? 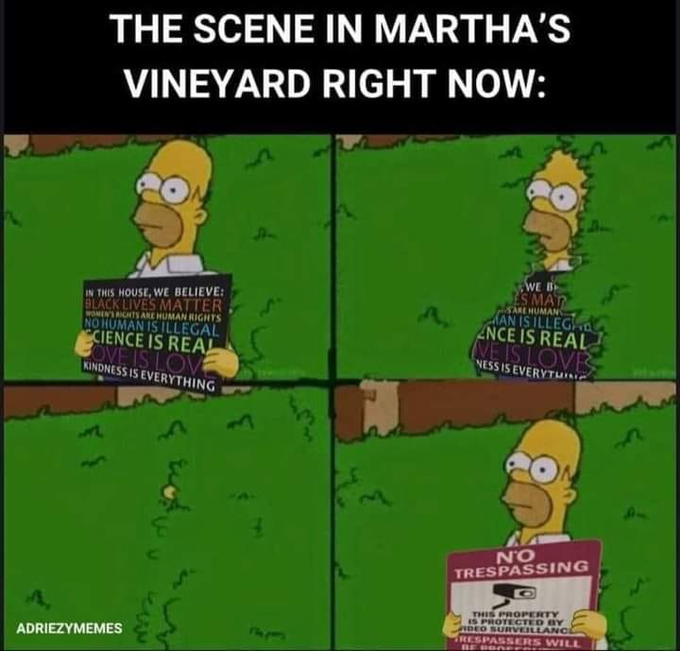