AS THE NUMEROUS and obvious ethical conflicts surrounding the Clinton Foundation receive more media scrutiny, the tactic of Clinton-loyal journalists is to highlight the charitable work done by the foundation, and then insinuate — or even outright state — that anyone raising these questions is opposed to its charity. James Carville announced that those who criticize the foundation are “going to hell.” Other Clinton loyalists insinuated that Clinton Foundation critics are indifferent to the lives of HIV-positive babies or are anti-gay bigots.

That the Clinton Foundation has done some good work is beyond dispute. But that fact has exactly nothing to do with the profound ethical problems and corruption threats raised by the way its funds have been raised. Hillary Clinton was America’s chief diplomat, and tyrannical regimes such as the Saudis and Qataris jointly donated tens of millions of dollars to an organization run by her family and operated in its name, one whose works have been a prominent feature of her public persona. That extremely valuable opportunity to curry favor with the Clintons, and to secure access to them, continues as she runs for president.

The claim that this is all just about trying to help people in need should not even pass a laugh test, let alone rational scrutiny. To see how true that is, just look at who some of the biggest donors are. Although it did not give while she was secretary of state, the Saudi regime by itself has donated between $10 million and $25 million to the Clinton Foundation, with donations coming as late as 2014, as she prepared her presidential run. A group called “Friends of Saudi Arabia,” co-founded “by a Saudi Prince,” gave an additional amount between $1 million and $5 million. The Clinton Foundation says that between $1 million and $5 million was also donated by “the State of Qatar,” the United Arab Emirates, and the government of Brunei. “The State of Kuwait” has donated between $5 million and $10 million.

Theoretically, one could say that these regimes — among the most repressive and regressive in the world — are donating because they deeply believe in the charitable work of the Clinton Foundation and want to help those in need. Is there a single person on the planet who actually believes this? Is Clinton loyalty really so strong that people are going to argue with a straight face that the reason the Saudi, Qatari, Kuwaiti and Emirates regimes donated large amounts of money to the Clinton Foundation is because those regimes simply want to help the foundation achieve its magnanimous goals?

Here’s one of the Clinton Foundation’s principal objectives; decide for yourself if its tyrannical donors are acting with the motive of advancing that charitable goal: 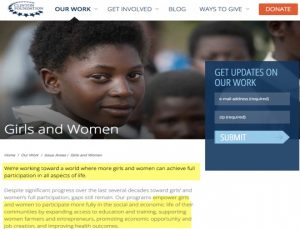 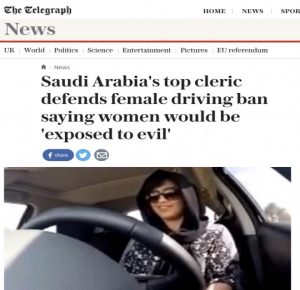 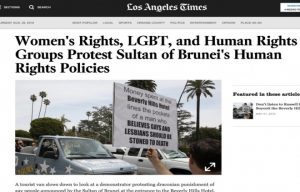 All those who wish to argue that the Saudis donated millions of dollars to the Clinton Foundation out of a magnanimous desire to aid its charitable causes, please raise your hand. Or take the newfound casting of the Clinton Foundation as a champion of LGBTs, and the smearing of its critics as indifferent to AIDS. Are the Saudis also on board with these benevolent missions? And the Qataris and Kuwaitis? 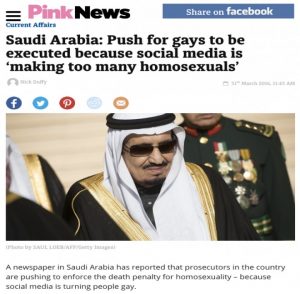 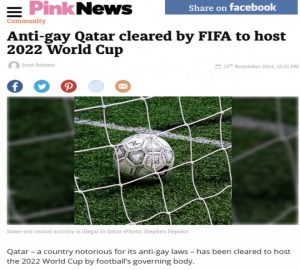 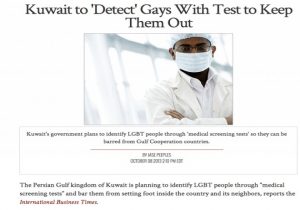 Which is actually more homophobic: questioning the Clinton Foundation’s lucrative relationship to those intensely anti-gay regimes, or cheering and defending that relationship? All the evidence points to the latter. But whatever else is true, it is a blatant insult to everyone’s intelligence to claim that the motive of these regimes in transferring millions to the Clinton Foundation is a selfless desire to help them in their noble work.

Another primary project of the Clinton Foundation is the elimination of wealth inequality, which “leads to significant economic disparities, both within and among countries, and prevents underserved populations from realizing their potential.” Who could possibly maintain that the reason the Qatari and Emirates regimes donated millions to the Clinton Foundation was their desire to eliminate such economic oppression? 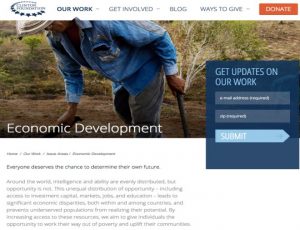 It doesn’t exactly take a jaded disposition to doubt that these donations from some of the world’s most repressive regimes are motivated by a desire to aid the Clinton Foundation’s charitable work. To the contrary, it just requires basic rationality. That’s particularly true given that these regimes “have donated vastly more money to the Clinton Foundation than they have to most other large private charities involved in the kinds of global work championed by the Clinton family.” For some mystifying reason, they seem particularly motivated to transfer millions to the Clinton Foundation but not the other charities around the world doing similar work. Why might that be? What could ever explain it?

Some Clinton partisans, unwilling to claim that Gulf tyrants have charity in their hearts when they make these donations to the Clinton Foundation, have settled on a different tactic: grudgingly acknowledging that the motive of these donations is to obtain access and favors, but insisting that no quid pro quo can be proven. In other words, these regimes were tricked: They thought they would get all sorts of favors through these millions in donations, but Hillary Clinton was simply too honest and upstanding of a public servant to fulfill their expectations.

The reality is that there is ample evidence uncovered by journalists suggesting that regimes donating money to the Clinton Foundation received special access to and even highly favorable treatment from the Clinton State Department. But it’s also true that nobody can dispositively prove the quid pro quo. Put another way, one cannot prove what was going on inside Hillary Clinton’s head at the time that she gave access to or otherwise acted in the interests of these donor regimes: Was she doing it as a favor in return for those donations, or simply because she has a proven affinity for Gulf State and Arab dictators, or because she was merely continuing decades of U.S. policy of propping up pro-U.S. tyrants in the region?

While this “no quid pro quo proof” may be true as far as it goes, it’s extremely ironic that Democrats have embraced it as a defense of Hillary Clinton. After all, this has long been the primary argument of Republicans who oppose campaign finance reform, and indeed, it was the primary argument of the Citizens United majority, once depicted by Democrats as the root of all evil. But now, Democrats have to line up behind a politician who, along with her husband, specializes in uniting political power with vast private wealth, in constantly exploiting the latter to gain the former, and vice versa. So Democrats are forced to jettison all the good-government principles they previously claimed to believe and instead are now advocating the crux of the right-wing case against campaign finance reform: that large donations from vested factions are not inherently corrupting of politics or politicians.

Indeed, as I documented in April, Clinton-defending Democrats have now become the most vocal champions of the primary argument used by the Citizens United majority. “We now conclude,” wrote Justice Anthony Kennedy for the Citizens United majority, “that independent expenditures, including those made by corporations, do not give rise to corruption or the appearance of corruption.” That is now exactly the argument Clinton loyalists are spouting to defend the millions in donations from tyrannical regimes (as well as Wall Street banks and hedge funds): Oh, there’s no proof there’s any corruption going on with all of this money.

The elusive nature of quid pro quo proof — now the primary Democratic defense of Clinton — has also long been the principal argument wielded by the most effective enemy of campaign finance reform, GOP Sen. Mitch McConnell. This is how USA Today, in 1999, described the arguments of McConnell and his GOP allies when objecting to accusations from campaign finance reform advocates that large financial donations are corrupting:

Senate opponents of limiting money in politics injected a bitter personal note into the debate as reformers began an uphill quest to change a system they say has corrupted American government. …

”How can there be corruption if no one is corrupt?” McConnell asked, zeroing in on McCain’s frequent speeches about the issue in his presidential campaign. ”That’s like saying the gang is corrupt but none of the gangsters are.”

When McCain refused to name names, Sen. Robert Bennett, R-Utah, confronted him. Standing just eight feet from him on the Republican side of the chamber, Bennett charged that McCain had accused him of corruption in seeking pork-barrel spending for his home state.

”I am unaware of any money given that influenced my action here,” Bennett said. ”I have been accused of being corrupt. … I take personal offense.”

The inability to prove that politicians acted as quid pro quo when taking actions that benefited donors has long been the primary weapon of those opposing campaign finance reform. It is now the primary argument of Democratic partisans to defend Hillary Clinton. In Citizens United, Justice John Paul Stevens wrote a scathing dissent on exactly this point, one that Democrats once cheered: 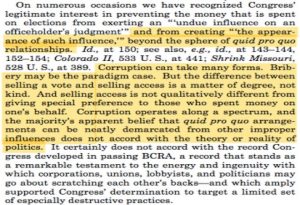 So if you want to defend the millions of dollars that went from tyrannical regimes to the Clinton Foundation as some sort of wily, pragmatic means of doing good work, go right ahead. But stop insulting everyone’s intelligence by pretending that these donations were motivated by noble ends. Beyond that, don’t dare exploit LGBT rights, AIDS, and other causes to smear those who question the propriety of receiving millions of dollars from the world’s most repressive, misogynistic, gay-hating regimes. Most important, accept that your argument in defense of all these tawdry relationships — that big-money donations do not necessarily corrupt the political process or the politicians who are their beneficiaries — has been and continues to be the primary argument used to sabotage campaign finance reform.

Given who their candidate is, Democrats really have no choice but to insist that these sorts of financial relationships are entirely proper (needless to say, Goldman Sachs has also donated millions to the Clinton Foundation, but Democrats proved long ago they don’t mind any of that when they even insisted that it was perfectly fine that Goldman Sachs enriched both Clintons personally with numerous huge speaking fees — though Democrats have no trouble understanding why Trump’s large debts to Chinese banks and Goldman Sachs pose obvious problems). But — just as is true of their resurrecting a Cold War template and its smear tactics against their critics — the benefits derived from this tactic should not obscure how toxic it is and how enduring its consequences will likely be.

ER recommends other articles by the Intercept

Glenn Greenwald is one of three co-founding editors of The Intercept. He is a journalist, constitutional lawyer, and author of four New York Times best-selling books on politics and law. His most recent book, No Place to Hide, is about the U.S. surveillance state and his experiences reporting on the Snowden documents around the world. Prior to co-founding The Intercept, Glenn’s column was featured at The Guardian and Salon. He was the debut winner, along with Amy Goodman, of the Park Center I.F. Stone Award for Independent Journalism in 2008, and also received the 2010 Online Journalism Award for his investigative work on the abusive detention conditions of Chelsea Manning. For his 2013 NSA reporting, he received the George Polk award for National Security Reporting; the Gannett Foundation award for investigative journalism and the Gannett Foundation watchdog journalism award; the Esso Premio for Excellence in Investigative Reporting in Brazil (he was the first non-Brazilian to win), and the Electronic Frontier Foundation’s Pioneer Award. Along with Laura Poitras, Foreign Policy magazine named him one of the top 100 Global Thinkers for 2013. The NSA reporting he led for The Guardian was awarded the 2014 Pulitzer Prize for public service.

Can We All Agree That U.S. Officials Are Lying About Yemen?