This week a pamphlet came in the mail. It read: “Who will you protect when you get your flu shot?”

It’s an interesting question that implies that by getting vaccinated, you will protect not only yourself but those around you; that getting vaccinated is the selfless, responsible thing to do for your loved ones and society.

But is this the question we should really be asking?

The pamphlet asked three questions about influenza and the vaccine.

The first question in the pamphlet was:

“Did you know you can spread the flu to others even if you don’t feel sick?”

Science doesn’t back this up. Studies on influenza show that the amount of shedding (spreading the virus) correlates directly with the severity of the illness. What this means is individuals who are infected with influenza and are very sick with symptoms (especially a higher fever) are likely very contagious. But those who are infected and show no symptoms (77% of all cases are asymptomatic) are less likely to be contagious. These studies conclude that those who are infected with the flu but don’t feel sick are not an important mode of transmission.

The second question in the pamphlet was:

“Did you know that you need a flu shot every year?”

The pamphlet explains that each year, research tries to predicts which strains of influenza will be worse for that year and then the vaccine is updated to fight those predicted strains.

This is pretty self-explanatory. We don’t really know which strains of influenza will be circulating in any given year, and therefore we can’t predict how effective the flu vaccine will be. I suppose then that this statement is true- the flu shot is recommended every year because it’s pretty much a stab in the dark.

A 2011 study published in The Lancet stated:

Influenza vaccines can provide moderate protection against virologically confirmed influenza, but such protection is greatly reduced or absent in some seasons. Evidence for protection in adults aged 65 years or older is lacking.

In fact, an 8-year study concluded in 2013 looked at 7,315 people vaccinated against influenza. The study examined vaccine effectiveness for the current year in individuals who were frequently vaccinated (those who got a flu shot once a year) compared to those who had no history of influenza vaccination in the past 5 years. The results showed that for those who received a yearly flu shot, the shot was only 24% effective for the current flu season. The shot was 65% effective for those who had not previously been vaccinated against influenza for at least 5 years.

In other words, the flu shot is actually more effective if you don’t get it every year.

The conclusion of the study notes:

However, this study raises relevant questions about the potential interference of repeated annual influenza vaccination and possible residual protection from previous season vaccination that have not been considered in most trials. Further observational studies that include simultaneous assessment of immune response, both to vaccine antigens and previously circulating viruses, and clinical protection would be helpful. In addition, we believe the results of this study and others support the need for another multiseason randomized clinical trial. Although a randomized trial cannot be conducted in the United States where influenza vaccination is universally recommended, it may be feasible in countries that do not currently recommend influenza vaccination for healthy adults. This would provide valuable new information about the impact of repeated annual influenza vaccination, and it will help guide future vaccine policy recommendations.

The third question on the pamphlet was actually a statement:

“You won’t get the flu from the flu shot.”

This statement is negated by the fact that the entire point of vaccination is to “give” people the disease they are being vaccinated for. The vaccine contains weakened or killed influenza virus which is given to the person with the intent that the body will create antibodies against it as it would if it encountered the wild strain. The hope with vaccination is that the person will experience no or only mild symptoms as their body encounters and fights the virus.

I assume, though, that the intended meaning behind the statement is that people won’t get sick with the flu following their flu vaccination.

The package insert for the live influenza vaccine (the nasal mist) states the common side effects of the vaccine:

The most common side effects are

Other possible side effects include

Let’s compare these to the symptoms of influenza virus.

Common signs and symptoms of the flu include:

Call it what you will…

A study published in 2011 examined the 2008-09 flu season and found a significant positive association between the seasonal flu vaccine and lab-confirmed H1N1 (also known as swine flu), which means that those diagnosed with H1N1 were more likely to have been vaccinated against the seasonal flu strains that year.

So now we know that some of these commonly held beliefs about the flu shot aren’t accurate. But why wouldn’t we want to get the flu shot to at least provide ourselves some protection against the flu?

Some adult formulations of the flu vaccine (including ones given to pregnant women) still contain thimerosal. Thimerosal is 49.6% ethylmercury.

Why worry about thimerosal?

Other Toxic Effects on Humans:
Hazardous in case of skin contact (irritant), of ingestion, of inhalation.

Inhalation: Causes respiratory tract irritation. May cause allergic respiratory tract irritation. Exposures to high concentrations may produce unconsciousness with cyanosis(a bluish discoloration of the skin due to deficient oxygenation of the blood) and cold extremities and may also affect the cardiovascular system (rapid pulse). Acute exposure to high concentrations of mercury vapors may also cause kidney damage and affect behavior/central nervous system, peripheral nervous system and autonomic nervous system, and liver and cause gastrointestinal effects (nausea, abdominal pain, vomiting).

Ingestion: Harmful if swallowed. May cause gastrointestinal tract irritation with nausea, vomiting and diarrhea, headache. Exposure to high concentrations may affect respiration and cardiovascular system which may produce unconciousness with cyanosis, cold extremities and rapid pulse. May also cause central nervous system effects and/or neurological effects, and may affect the urinary system (kidneys),and liver. Chronic Potential Health Effects: Skin: Prolonged or repeated skin contact may cause skin sensitization, an allergic reaction. Inhalation and Ingestion: Repeated or prolonged exposure may cause cause kidney damage, and may affect the liver, and bone marrow. Chronic exposure to mercury vapors behavior/central nervous system and peripheral nervous system (depression, irritability, nervousness, weakness, ataxia, fatigue, tremor, jerky gait, limb spasms, personality changes), metabolism (anorexia, weight loss) and cause gastrointestinal disturbances which is collectively referred to as “aesthenic-vegetative syndrome.” Chronic ingestion may cause accumulation of mercury in body tissues and may result in salicylism which is characterized by nausea, vomiting, gastric ulcers, and hemorrhagic strokes.

Thimerosal exposure has been linked to neurological conditions (including autism).

Thimerosal can also potentially impair fertility and causes fetal deaths in rats and mice when exposed through inhalation. Ethyl mercury given orally to albino rats prior to mating affected fertility for three generations.

Children vaccinated against influenza are more likely to be hospitalized for flu.

A Mayo Clinic study reported that children vaccinated with the inactive influenza vaccine are three times the risk of hospitalization for flu:

The inactivated flu vaccine does not appear to be effective in preventing influenza-related hospitalizations in children, especially the ones with asthma. In fact, children who get the flu vaccine are more at risk for hospitalization than their peers who do not get the vaccine, according to new research that will be presented on May 19, at the 105th International Conference of the American Thoracic Society in San Diego.

The CDC notes that the nasal vaccine (which contains live virus) can shed to contacts. Children can spread the virus up to three weeks following vaccination. Transmission of flu to others from the shedding is rare.

Influenza vaccination is linked to severe side effects.

The June 2014 Report from the Department of Justice reports 64 cases of vaccine injury compensated from February 2014 to May 2014.

Of the 64 settlements from February to May 2014, 45 of them were for injuries or death related to the flu vaccine. Injuries include Guillain-Barré Syndrome, chronic inflammatory demyelinating polyneuropathy (a progressive nerve-damaging, weakening condition- 30% of sufferers end up wheel-chair bound), rheumatoid arthritis, shingles, narcolepsy, and more. 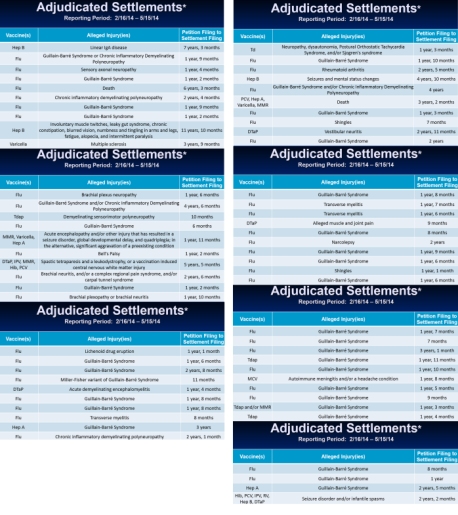 Aside from cases compensated by the government, which have to be meticulously proven, other side effects have been linked to the flu vaccine as well. Studies have shown a positive association between the influenza vaccine and narcolepsy. A 2013 study published in the British Medical Journal (BMJ) confirmed a link between the 2009 H1N1 vaccine and narcolepsy in Scandinavian countries and England. Reports of vaccine-induced narcolepsy also increased the same year in the U.S., Canada, France and Hong Kong.

Guillain-Barré Syndrome has also been linked to the flu vaccine.

What about the flu vaccine during pregnancy?

If the flu shot were 80% effective, researchers estimate that 1 to 2 hospitalizations during the flu season (an average of 2.5 months) could be avoided per 1,000 pregnant women vaccinated with the flu shot. But the flu vaccine is on average less than 60% effective. In fact, a 60% reduced risk of a doctor visit is considered “substantial protection” when it comes to the flu shot, as noted by the CDC this year:

A second report in this week’s MMWR showed that influenza vaccination offered substantial protection against the flu this season, reducing a vaccinated person’s risk of having to go to the doctor for flu illness by about 60 percent across all ages.

As you can see in the graph below, nearly two-thirds of all cases brought before the U.S. federal vaccine court (called the Vaccine Injury Compensation Program, or VICP) are dismissed, and most cases take years to go through the court system. 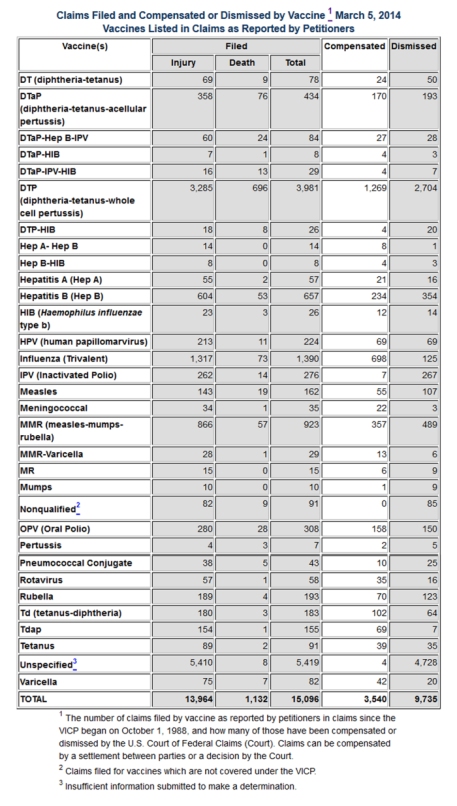 I strongly encourage you to watch this 45-minute video of the Congressional Briefing on the Vaccine Injury Compensation Program. The video sheds light on how difficult it is to navigate the vaccine injury system.

Families with vaccine injuries are most often left to deal with the consequences on their own: emotionally, physically and financially.

The real question, then, is this:

Who will protect you when you get your flu shot?

TLB recommends you visit Kari at her blog: Vaccinelinks for more great/pertinent articles and information concerning the dangers of vaccines and vaccinations.

Genocide via Bio-Engineered Diseases & Vaccines: In Lies We Trust

Your Child. Your Future. Your Choice

At What Point Did We Start Accepting Our Insane World As The Norm?