While the mainstream media continuously amplified all those unsourced rumors about President Trump’s reported battles with his top public health officials – particularly Dr. Anthony Fauci  – it almost seemed like a miracle when the Pfizer-BioNTech vaccine started rolling off the assembly lines after all that dysfunction.

Well, as it turns out, the media narrative doesn’t always perfectly reflect reality. And one of the most glaring examples during the US pandemic response was Andrew Cuomo’s handling of the response in the Empire State. 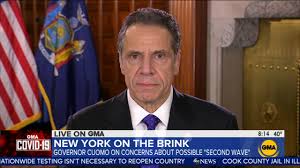 Hailed as an effective leader by Democrats, Cuomo’s smiling face graced 1000s of articles; but all of this belies the many mistakes he made both during the early days of the Pandemic, to the botched vaccine rollout, where Cuomo’s policies led hospitals to keep vaccines rotting on shelves in the name of “racial equality”.

Things have not gone so well in the PR space for the Governor in recent weeks. New York State Attorney General Letitia James released a report last Thursday detailing the investigations her office has conducted into nursing homes policies and actions during the pandemic. The report shows that the nursing home deaths in New York State were likely undercounted by up to 50 percent.

The investigation, ongoing since March, when Governor Cuomo issued his directive to send COVID patients back to nursing homes following hospitalizations, was begun due to allegations of “patient neglect and other concerning conduct,” according to The Post-Journal.

Cuomo made headlines earlier this week for saying that “incompetent government kills people.”

The situation worsened in recent months as state health officials said they often found out about major policy changes, like, reopening restaurants, via the press.

In recent weeks, the governor has repeatedly made it clear that he believed he had no choice but to seize more control over pandemic policy from state and local public health officials, who he said had no understanding of how to conduct a real-world, large-scale operation like vaccinations.

After early problems, in which relatively few doses were being administered, the pace of vaccinations has picked up and New York is now roughly 20th in the nation in percentage of residents who have received at least one vaccine dose.

Many of Cuomo’s top public health officials were so angry about being left out of the loop (so to speak) they abruptly quit, prompting the NYT to tout in a headline that Cuomo had “declared war” on his own department of public health.

But at least nine senior state health officials have left the department, resigned or retired in recent months.

They include Elizabeth Dufort, the medical director in the division of epidemiology; Dr. Jill Taylor, the head of the renowned Wadsworth laboratory — which has been central to the state’s efforts to detect virus variants — and the executive in charge of health data, according to state records.

Dr. Zucker said in a statement that the state was facing “an intense period of extraordinary stress and pressure and a different job than some signed onto.”

He added: “The Times’s point is several staff left – true, and many others joined the agency with the talents necessary to confront this new challenge.” The proof, he said, “is in the performance numbers”

Several top Dems agreed, and told the NYT that the red tape enacted by the governor was unnecessary and unsustainable.

“Extensive red tape and unnecessary rigidity over who we could vaccinate and when – all with the looming threat of millions of dollars in punitive fines – made an extraordinarily difficult task all the more challenging in those first initial weeks of the rollout,” said Avery Cohen, a spokeswoman for Mayor de Blasio.

In his own planning for the vaccine rollout, Mr. Cuomo spoke with hospital executives, outside consultants and a top hospital lobbyist in closed-door meetings. In December, Mr. Cuomo announced that the state would rely on large hospital systems as “hubs” to coordinate vaccinations, not simply for their own staff but also for ordinary New Yorkers.

In other words, with the return of indoor dining just weeks away in NYC, it’s beginning to look like Cuomo’s vaccine rollout isn’t designed with efficiency in mind; instead it was inspired by a megalomaniac politician desperately trying to sell copies of his new book while virtue-signaling.

Related about Cuomo from The Liberty Beacon:

Five Reasons to be Thankful for School Choice