Trump Jr.: “Here’s What Comes Next for Our Amazing Movement”

Donald Trump Jr.., the son of former President Donald Trump, said that efforts from the former president and his team to advance the interests of the United States are continuing. He characterized such efforts as “a movement of the people … against the elite.”

In a video on Trump Jr.’s social media accounts, headlined “here’s what comes next for our amazing movement,” he told supporters, “Just want to make sure everyone knows, guys, we are not done yet

Trump Jr. then shared a recent video clip that showed his father walking off the golf course while saying, “We haven’t finished yet.”

“A lot of those things have been brewing for quite some time. And that’s why for me I’m still standing engaged and we’re going to get in there and fight to elect people who really represent the people—people like you who have gone through so much.”

Trump Jr. said that the former president is still “going to be in that fight.”

“I know he’s still going to keep going. I know we’re up against a lot, we always have been,” Trump Jr. said, later adding that is father is “going to be in there making sure that we have people who truly represent what America is all about.”

The former president’s son moved on to speak about how fact checkers on social media appear to be biased against conservatives while lenient toward “the other side.” Drawing from his personal experience, he said that his content is fact checked “even if there’s even a little bit” of irregularity.

“When I look at things that I put up on my social media that are totally objective or that are satire, one or the other, that [social media content] gets fact checked so that they can use that to knock my platform, to prevent me from getting any kind of reach,” he said. “I see that stuff on a daily basis, I don’t see that on the other side. I don’t see Joe Biden getting fact checked when he said he’s not going to ban fracking, when he bans fracking.”

He added, “If there’s even a little bit of ambiguity they get the benefit of the doubt, whereas if there’s even a little bit, a modicum, something like I said, subjective, who’s to know what the fact checker’s thinking, but certainly I know what I’m thinking and I can come up with a parameter that makes everything correct but the fact checkers can say that it falls outside of those lines.

He alleged that the Biden administration appeared to have a “China first, America last policy,” accusing the new administration of “crushing jobs” amid the CCP (Chinese Communist Party) virus pandemic.

Trump recently opened an “Office of the Former President” that seeks to advance the interests of the United States and carry on the agenda of his administration. 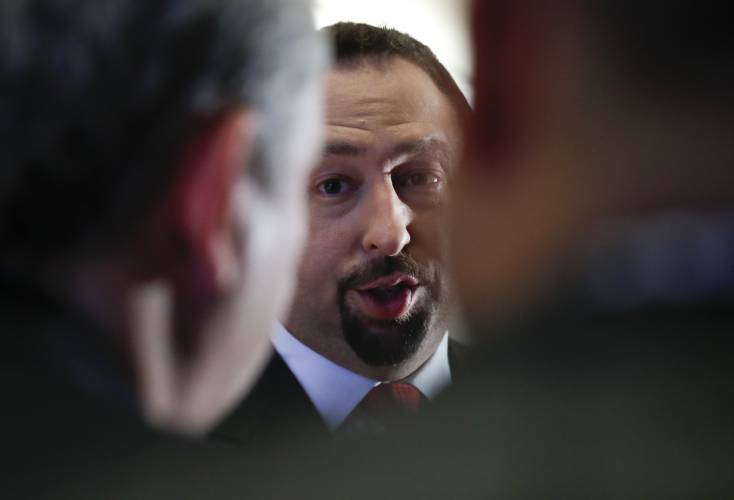 Jason Miller (pictured above), a campaign adviser, said in January that Trump would be involved in the 2022 midterms with the immediate focus being to help Republicans win back both chambers of Congress.

When Trump left Washington for Florida on Jan. 20, he told supporters that he and his team would “be back in some form.”

“We love you. We will be back in some form,” he said at the time. “I will always fight for you. I will always be watching. I will be listening.”

Trump on Friday appeared to have made his first social media post since leaving the White House. The post showed a letter from Trump’s lawyers to Rep. Jamie Raskin (D-Md.), the House of Representatives’ lead impeachment manager, saying that they reject attempts to have Trump testify in his upcoming impeachment trial.

House Democrats impeached Trump on a single charge that alleges that he incited a mob that breached the Capitol on Jan. 6. The Democrats were joined by 10 Republicans.

This is the first time in U.S. history that a president has been impeached twice. It is also the first time a former president faces an impeachment trial after leaving office. In a trial memorandum, Trump attorneys denied the allegations and challenged the constitutionality of trying Trump after he had left office.