An op-ed written in the New York Times by an anonymous “senior official in the Trump administration” has drawn harsh rebuke from both sides of the aisle and beyond – after everyone from President Trump to Glenn Greenwald to the Los Angeles Times chimed in with various criticisms.

The author, who claims to be actively working against Trump in collusion with other senior officials in what they call a “resistance inside the Trump administration,” has now been labeled everything from a coward, to treasonous, to nonexistent.

Trump, as expected, lashed out at the “failing” New York Times – before questioning whether the the mystery official really exists, and that if they do, the New York Times should reveal the author’s identity as a matter of national security.

Does the so-called “Senior Administration Official” really exist, or is it just the Failing New York Times with another phony source? If the GUTLESS anonymous person does indeed exist, the Times must, for National Security purposes, turn him/her over to government at once!

Trump supporters, also as expected, slammed the op-ed as either pure fiction or treason – a suggestion Trump made earlier Wednesday.

What we don’t imagine the anonymous author or the Times saw coming was the onslaught of criticism coming from the center and left – those who stand to benefit the most from Trump’s fall from grace, or at least probably wouldn’t mind it.

In an op-ed which appeared hours after the NYT piece, Jessica Roy of the Los Angeles Timeswrites: “No, anonymous Trump official, you’re not ‘part of the resistance.’ You’re a coward” for not going far enough to stop Trump and in fact enabling him.

If they really believe there’s a need to subvert the president to protect the country, they should be getting this person out of the White House. But they’re too cowardly and afraid of the possible implications. They hand-wave the notion thusly:

“Given the instability many witnessed, there were early whispers within the cabinet of invoking the 25th Amendment, which would start a complex process for removing the president. But no one wanted to precipitate a constitutional crisis.”

How is it that utilizing the 25th Amendment of the Constitution would cause a crisis, but admitting to subverting a democratically elected leader wouldn’t?

If you’re reading this, senior White House official, know this: You are not resisting Donald Trump. You are enabling him for your own benefit. That doesn’t make you an unsung hero. It makes you a coward. –LA Times

Meanwhile, Glenn Greenwald – the Pulitzer Prize Winning co-founder of The Intercept, also called the author of the op-ed a “coward” whose ideological issues “voters didn’t ratify.”

Greenwald continues; “The irony in the op-ed from the NYT’s anonymous WH coward is glaring and massive: s/he accuses Trump of being “anti-democratic” while boasting of membership in an unelected cabal that covertly imposes their own ideology with zero democratic accountability, mandate or transparency.”

Many of the complaints from the NYT’s anonymous WH coward – not all, but many – are ideological: that Trump deviates from GOP orthodoxy, an ideology he didn’t campaign on & that voters didn’t ratify. Trump may be a threat but so is this covert coup to impose these policies. pic.twitter.com/4Qf54JJHN9

The irony in the op-ed from the NYT’s anonymous WH coward is glaring and massive: s/he accuses Trump of being “anti-democratic” while boasting of membership in an unelected cabal that covertly imposes their own ideology with zero democratic accountability, mandate or transparency

So who is the “coward” in the White House?

While the author remains anonymous, there are a couple of clues in the case. For starters, Bloomberg White House reporter Jennifer Jacobs points out that the New York Times revealed that a man wrote the op-ed, which rules out Kellyanne Conway, Nikki Haley, Ivanka and Melania (the latter two being CNN’s suggestions). 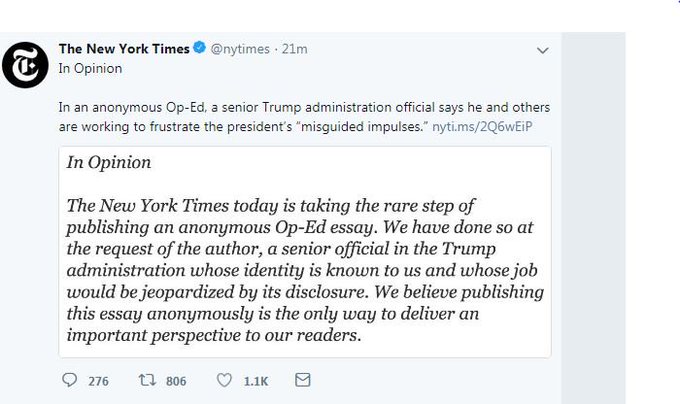 NYT tweet suggests the anonymous senior admin official is a man — “he.”

The official complains Trump “engages in repetitive rants, and his impulsiveness results in half-baked, ill-informed and occasionally reckless decisions.” https://www.nytimes.com/2018/09/05/opinion/trump-white-house-anonymous-resistance.html …

A second clue comes from the language used in the op-ed, and in particular “Lodestar” – a rare word used by Mike Pence in at least one speech. Then again, someone trying to make one think it’s pence would also use that word (which was oddly Merriam-Webster’s word of the day last Tuesday).

A pence-theory hashtag has already emerged to support this theory; #VeepThroat

This is an interesting theory using an interesting clue. “Lodestar” is, in fact, a very unusual word. So unusual that if I wanted someone to wonder if I were Mike Pence, I might use it. Or, perhaps, if I were someone who worked with Pence and picked up the word as a result.

The @nytimes just published an anonymous op-ed from a “senior administration official.” I’d like to posit a guess as to who wrote it. Getting my @ashleyfeinberg on began with a single word that jumped out at me… https://twitter.com/nytopinion/status/1037423440167354368 …

Are people seriously entertaining the idea that Mike Pence himself wrote that op-ed? Based on the word “lodestar”? Come on.

Given the Op-Ed’s praise of the late Senator John McCain, never-Trumper and Iraq War sabre-rattler Bill Kristol tweeted that it was Kevin Hassett, the Chairman of the Council of Economic Advisers. Of course, Kristol and whoever wrote the op-ed are ideologically aligned, so one might question why he would voluntarily work against this person.

“John McCain put it best….We will always have his example—a lodestar for restoring honor to public life & our national dialogue. Mr. Trump may fear such honorable men, but we should revere them.”
Hassett, McCain’s top economic adviser in 2000, was a guest at Saturday’s service.

So while we don’t know who wrote the op-ed, it appears to be backfiring spectacularly on its author(s) amid wild theories and harsh rebuke from all sides of the aisle.

We’re sure Carlos Slim – the largest owner of the New York Times and once the richest man on earth, is having a good laugh at Trump’s expense either way… for now.

Perhaps Trump can push the “fabrication” angle longer than NYT can retain the moral high ground – especially after they hired, then refused to fire, Sarah Jeong – a new addition to the NYT editorial board who was revealed in old tweets to be an openly bigoted, with a particularly deep hatred of “old white men.”

The New York Times stood by Jeong – claiming she was simply responding to people harassing her for being an Asian lesbian – only to have their absurd theory shredded within hours. Jeong in fact has a multi-year history of unprovoked and random comments expressing hatred towards white men.

And now she’s right on the front lines of perhaps the greatest attempt to smear Trump yet. Not exactly a good look for the Times at a time when MSM credibility has already taken a hit. How many broke bread with the Clinton campaign leading up to the 2016 election?

(TLB) published this article from ZeroHedge with our appreciation for the coverage.