(RT)  A lawyer for presidential candidate Tulsi Gabbard is demanding that Hillary Clinton retract her “defamatory” comments alleging that the anti-war Democrat is a Russian asset and Moscow’s “favorite” for the 2020 election.
.

In a letter to Clinton seen by the Hill, Gabbard’s legal counsel said Clinton “knew it was false” when she accused the Hawaii congresswoman of being a Russian asset. “Your statement is defamatory, and we demand that you retract it immediately,”Gabbard’s lawyer wrote in the letter, demanding a verbal response from Clinton.

This fabricated story is so facially improbable that it is actionable as defamation.

Gabbard has taken a strong stance against Clinton’s recent claim on the Campaign HQ podcast that she was “the favorite of the Russians” and that they are “grooming” her to run as a third-party disruptor candidate. Clinton did not mention Gabbard by name, but it was understood in the context of the conversation who she was referring to — and the claim was instantly picked up by mainstream news organizations. A Clinton spokesperson even confirmed that her comments were in relation to Gabbard on CNN the next day.

“Congresswoman Gabbard is not a Russian asset and is not being groomed by Russia,” Gabbard’s lawyer said, adding that besides Clinton’s comment, “no law enforcement or intelligence agencies have claimed, much less presented any evidence” that she is an asset of Russia.

The letter calls on Clinton to admit she was “wrong” and made a “grave mistake and error of judgment” in her comments.

Following uproar over the comments, Clinton attempted to backtrack and claim that she had meant that “Republicans” were grooming Gabbard for 2020, not the Russians. Gabbard’s lawyer took issue with that interpretation, saying that it “makes no sense” in light of what Clinton actually said on the podcast.

Gabbard’s camp did not respond to a request from Fox News asking if she intends to sue Clinton if no retraction is forthcoming. Clinton has not yet commented on the letter.

An Iraq war veteran, Gabbard has faced constant smears from both the media and her Democratic colleagues since announcing her candidacy for president, with many being particularly irked by her anti-war views and criticisms of US foreign policy in Syria and beyond. 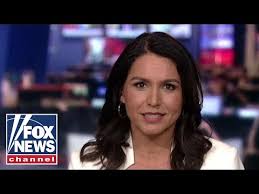 “I will never be able to undo what they have done in trying to cast suspicion amongst the American people about where my loyalties actually lie,” Gabbard said in an interview on Fox last month.

(TLB)  published this story from RT – USA News with our thanks for the coverage and availability.