With a scowl on his face, the neighborhood bully trolls the sidewalks looking for just the right ‘kid’ to pick on… preferably one that is much smaller than he. The bully quizzes the kid as to why he dares exist. The bully and kid make an agreement… The bully will not beat up the kid if the kid gives him all of his marbles and the kid will be free to roam the neighborhood unharmed by the bully or any of his friends.

The minute the kid hands over his bag of marbles (including his prized Steelie) the bully summons his friends and they begin to pulverize the kid into oblivion. Ah, once again it is “good to be king” doing the ‘right thing’ for the neighborhood.

The world’s neighborhood bully is the NeoCons that troll the Globe looking for a smaller country with a leader that can be manipulated into a “reason for war.” The end result of this scenario (and always part of the plan) is Regime Change.

In the case of Syria, President Bashar al-Assad has refused to play the part of “the kid” in the U.S. staged production of “Bad Leader and The False Flag.” The latest U.S. Military action has the people of Syria, Russia and Iran dancing in the street laughing. More on that in the article below.

Trump and the NeoCons

We were disappointed when President Trump approved the Syrian missile attack, but not surprised. There a several reasons why he would take this action… but not limited to… he is being controlled by the Deep State NeoCons, Jarred (son and law) is whispering in his ear pro-war dialogue from the Banksters and Israel’s Netanyahu or considering Trump’s concern about his and his administration’s image being dragged through the DC Swamp with scandal and innuendo, what better way to take the insider scandal heat off DC than some military action in another part of the world.  (TLB)

“People Are Dancing In The Streets”: Syria, Russia, Iran Shrug Off “More Limited Than Feared” Airstrikes

And just like that, Trump’s second Syrian attack appears to have come and gone.

Sure, over a 100 cruise missiles were fired on Saturday morning local time at three mostly empty military installations, including one research and two storage facilities in airstrikes that last no more than 70 minutes …

… Syrian air defenses may or may not have intercepted many, if not a majority of the launched missiles, and Trump got to wave his “mission accomplished” flag on twitter, but did anything change?

Not if one observes the response of the targeted nations: on Saturday, Syria, Russia and Iran largely shrugged off the strikes by the United States, United Kingdom and France (but not Germany and Italy) against three Syrian chemical weapons facilities, which naturally drew angry condemnations but no indication that there would be a wider escalation.

But, as the WaPo reported, the pre-dawn volleys of cruise missiles launched by the United States, Britain and France “were limited to three sites linked to Syria’s chemical weapons program and triggered no retaliation.”

In saving face, Russia said they did little damage and that most of the cruise missiles targeting Syrian sites had been intercepted by Syrian air defenses, including all of those that were bound for the site from which last week’s alleged chemical attack originated.

Syria quickly trolled Trump, and shortly after the attack the Syria presidency tweeted a post saying “the honorable cannot be humiliated.” A few hours later, the account tweeted a video of him [Assad] walking nonchalantly to work through the halls of the Syrian presidential palace. The text said: “The morning of resilience.”

Meanwhile, in the capital Damascus, there was defiance and relief as residents jolted awake by explosions at around 4 a.m. realized the strikes would be limited. Syrian state television broadcast scenes of citizens taking to the streets to celebrate and demonstrate their support for Syrian President Bashar al-Assad, waving Syrian, Russian and Iranian flags. As WaPo Beirut bureau chief Liz Sly wrote:

Damascus is shrugging off the US strikes, which turned out to be more limited than feared. People are dancing in the streets, waving Assad’s portrait & saying Trump has failed.

“Thank God this was less than we had feared. We were scared of a bigger assault that could be devastating, but we are happy it was limited and less powerful,” Mayda Kumejian, a Damascus resident, told the WaPo by phone. She described being jolted awake by explosions and the sound of jets roaring overhead.

At a rally in Damascus today, celebrating their victory in shooting down American missiles. The Syrians I’m meeting are unbelievably friendly.. I talked to a soldier at the rally and when I said I was American, he beamed and said “welcome! We still love you” pic.twitter.com/czqXkuUxNv

“This strike is only muscle flexing by Trump to show his power,” she said. “Assad’s regime is much stronger now.”

“We tell Trump, you can do nothing. Here we are celebrating to show that you are bankrupt,” said a jubilant woman interviewed on state television.

There were no immediate reports of casualties. Damascus’s allies saying the buildings hit had been evacuated in advance.

According to Reuters, French President Emmanuel Macron said the strikes had been limited so far to Syria’s chemical weapons facilities. Paris released a dossier that it said showed Damascus was to blame for the poison gas attack on Douma, the last town holding out in a rebel-held swathe of territory near Damascus that government forces have recaptured this year.

British PM Theresa May described the strike as “limited and targeted”, with no intention of toppling Assad or intervening more widely in the war. She authorized British action after intelligence showed Assad’s government was to blame for gassing the Damascus suburb of Douma a week ago, she said.

So far, there has been no publicly released evidence that the Assad regime was indeed behind the chemical attacks; instead in its briefing on Saturday morning, the Pentagon referenced a “2000% increase in Russian trolls”. It now appears that the same excuse the left used for Hillary’s loss is what the Trump admin is using to justify ceding power to the military industrial complex.

And while most of the west has been united in its condemnation against Syria, lack of evidence notwithstanding, Germany and Italy said on Saturday that they refuse to participate in the strikes.

Meanwhile, the Pentagon also said the United States had “deconfliction” contacts with Russia before and after the strikes, that Syrian air defense systems had been largely ineffective and there was no indication that Russian systems had been employed.

In comments on Saturday morning, the Russian Defense Ministry said the strikes did little damage and claimed that of 103 cruise missiles fired in the U.S.-led airstrike, 71 were shot down by Syria’s Soviet-made air-defense systems. The intercepted missiles included all 12 of those bound for the Al-Dumayr military airfield near Damascus, where the chemical attack that triggered the crisis was allegedly launched.

In de-escalating the airstrikes’ aftermath, Russia said its own air defenses were not activated because none of the missiles passed through its zone of influence. Russia also said there were no immediate reports of military or civilian casualties. The Syrian army command said three civilians had been injured in the attack on Homs.

One reason why there was no escalation: the strikes had been flagged so far in advance that Syria and its allies had plenty of notice to evacuate the likely targets of civilians and assets, possibly also including key components of the chemical weapons program, leaving it unclear how much of an impact they would have.

Saturday’s strike against Syria was the second time in little over a year that the Trump administration had launched “retaliatory strikes” against Syria in the wake of chemical attacks. Last year’s attack, which took place on April 7, 2017, targeted the Shayrat air base outside Hama, which U.S. officials said was used to launch a sarin gas attack that killed 70 people in the northern Syrian town of Khan Sheikhoun. Within a week of last year’s strikes, Syrian media broadcast photographs showing that the base was operative again.

So what, if anything changed, and what was the point of the airstrikes?

Some, observing that Russian air defenses did not engage, and that the US & Russia are now in full deconfliction mode, claimed that “the whole thing was just a charade.”

Russian air defenses did not engage during #SyrianStrikes, says US Joint Satff director Lt. Gen. McKenzie
↨
US & Russia in full deconfliction mode. The whole thing was just a charade.

Meanwhile, according to NBC Chief Foreign Correspondent, Trump’s message was simple: “Assad wasn’t targeted.  His air force remains intact.  US efforts taken to prevent escalation with Russia. So the message seems to be that the Syrian regime can continue its war and Assad still gets to win, just not by using chemical weapons.”

Assad wasn’t targeted. His air force remains intact. US efforts taken to prevent escalation with Russia. So the message seems to be that the Syrian regime can continue its war and Assad still gets to win, just not by using chemical weapons. https://twitter.com/LizSly/status/985116039078957057 … 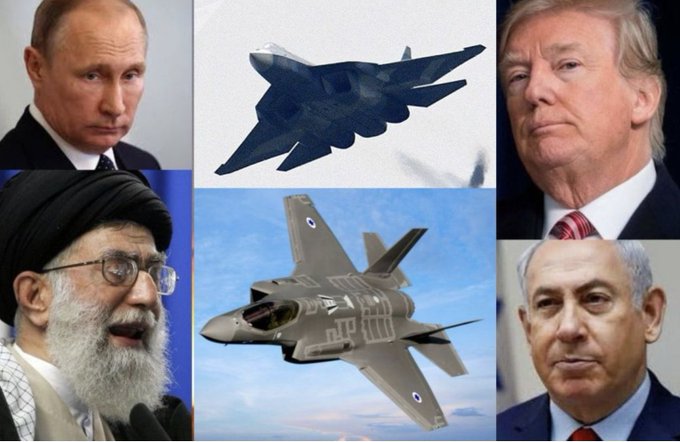 The most consequential strategic issue in Syria now is not Russian-US relations but Iranian-Israeli relations. Russia may forego escalation after Western strikes. But there is every indication that Iran is unlikely to let the Israeli killing of its soldiers go unanswered.

The best news, however, is that Trump got his “mission accomplished” victory parade, if only in his own eyes.

A perfectly executed strike last night. Thank you to France and the United Kingdom for their wisdom and the power of their fine Military. Could not have had a better result. Mission Accomplished!

TLB published this story from ZeroHedge, with our thanks to Tyler for the coverage.

Sky News cuts off top British Army general after he asks ‘Why would Syria launch a gas attack now?’

“Occupied and Defeated America” and the Syrian Air Strike [Putin is Pissed!]

Scotland: Investigation After ‘Mystery’ Surge in Deaths of Newborn Babies

Iran Over a Mine?