The Libyan civil war rages well into its eighth year as warlord Khalifa Haftar lays siege to Tripoli, the nation’s capital and seat of the United Nations-backed government. 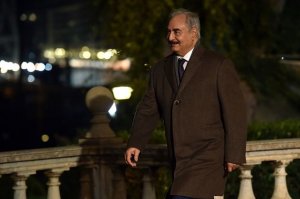 The Libyan civil war rages well into its eighth year as warlord Khalifa Haftar lays siege to Tripoli, the nation’s capital and seat of the United Nations-backed government. Haftar’s attack has escalated the violence that has plagued the country since the downfall of longtime dictator Muammar Gaddafi in the 2011 Arab Spring. Haftar’s Libyan National Army, which controls over two-thirds of the nation’s territory, stands accused of dozens of war crimes, including a deadly airstrike on a Tripoli migrant detention center, as many nations around the world shift allegiances toward the warlord and away from the U.N.-backed government.Almost 5,000 miles away in Washington, the battle rages on a different front: Both the Libyan government and the rebels have inked multi-million dollar deals with prominent D.C. lobbyists as they aim to win the backing of American policymakers.Left scrambling after Haftar’s attack, Mercury Public Affairs and Prime Policy Group added at least 17 foreign agents to foreign influence operations for the Libyan government since early May. The hires include former Rep. John Tanner (D-Tenn.), a longtime stalwart on the House Foreign Affairs Committee and vice chairman of Prime Policy Group, and Edward Cox, former senior policy advisor to retired Sen. Orrin Hatch (R-Utah). The government agreed to pay Mercury $2 million annually in retaining their services. Prime Policy Group, on the other hand, says it made a verbal agreement to work on a pro-bonobasis.“A unified, democratic Libya is in the best interest of Libyans and furthers the security goals of the United States,” the organization said in a press release.Haftar’s Libyan National Army has contracted five foreign agents and operatives at Linden Government Solutions, a Texas firm headed by former Bush administration official Stephen Payne. The arrangement, first reported by the AP, will officially include meetings with U.S. officials, “international coalition building and general public relations.”Payne has an extensive history with the troubled North African nation. He visited in 2011 with former Rep. Curt Weldon (R-Penn.) before the fall of Gaddafi, helping to negotiate the release of three imprisoned journalists. At the same time, he was bankrolling Weldon’s visit in hopes the former congressman could convince Gaddafi to step down. Payne has close ties to three of Gaddafi’s sons.The one-year deal with Linden is worth about $2 million. While not explicitly mentioned in the contract, both parties may have an interest in Libyan’s abundant oil, as Payne and legal counsel Brian Ettinger have deep ties in international energy markets and Haftar recently gained control of El Sharara, Libya’s largest oil field.

The Obama administration fervently backed the Government of National Accord, sayingAmerica’s partnership with the government “is in America’s national security interest in our fight against ISIL.” While the U.S. and other major powers have nominally pledged support for Tripoli’s Government of National Accord for years, Haftar’s military success has made many reconsider where their allegiances lie. The Trump administration appears to be divided on which side to support, with the president reportedly praising the warlord for his victories against Islamist groups and encouraging the Libyan National Army’s march on Tripoli in an April phone call. National Security Advisor John Bolton also encouraged Haftar’s attack, according to diplomatic sources.The White House’s support for Haftar clashes with the State Department’s official position, which is still in favor of the Libyan government. On April 7, Secretary of State Mike Pompeo condemned Haftar’s attack and urged both sides to pursue a diplomatic solution.
“We have made clear that we oppose the military offensive by Khalifa Haftar’s forces and urge the immediate halt to these military operations against the Libyan capital,” Pompeo said in a statement at the time.  But in mid-April, the U.S. refused to support a U.N. Security Council resolution calling for a nationwide ceasefire, joining Russia, a Haftar ally, in defeating the resolution. The U.S. did not provide a reason for the refusal.Trump’s sudden favor for Haftar was reportedly the result of intense pressure from Saudi Crown Prince Mohammed Bin Salman and Egyptian President Abdel Fattah Al Sisi. Saudi Arabia and Egypt, alongside the United Arab Emirates and Russia, are backing Haftar and the Libyan National Army.France has also covertly supported Haftar, with news breaking Wednesday that anti-tank missiles recovered at a Libyan National Army base belong to French special forces working in the region. The nation has significant oil investments in Libya that are now under the control of Haftar.Haftar has been a power player in Libya since 1969, when, as a young army officer, he took part in Gaddafi’s coup against the Libyan monarchy.  He was named one of Gaddafi’s top military advisers shortly thereafter.Haftar turned against Gaddafi after the dictator disavowed his sanctioned military excursion into neighboring Chad. He joined the CIA-backed opposition group National Front for the Salvation of Libya before fleeing the country following a failed coup attempt in 1996.Haftar spent the next 20 years living in northern Virginia, with some suspecting that his proximity to the CIA, which organized numerous assassination attempts against Gaddafi, indicated an ongoing relationship. He continues to hold American citizenship.Haftar returned to Libya in 2014 and quietly formed an army to oppose the Islamist militiasscattered throughout the war-torn nation, gaining the support of the newly-formed Libyan House of Representatives. In 2015, he became commander of the Libyan National Army, which later split into two factions: one in support of the House of Representatives government based in the eastern city of Tobruk and the other, the Libyan Army, in support of the U.N.-backed Government of National Accord.Haftar’s forces played a major role in weakening ISIL and other extremists, retaking the major cities of Benghazi in 2017 and Derna in 2018. Now, Haftar’s forces are aiming at sweeping the Government of National Accord out of power for good by taking Tripoli.More than 1,000 people have died since Haftar launched the Tripoli offensive in April. The U.N. Security Council has reiterated its calls for a diplomatic solution amidst the escalating violence.

At OpenSecrets.org we offer in-depth, money-in-politics stories in the public interest. Whether you’re reading about 2020 presidential fundraising, conflicts of interest or “dark money” influence, we produce this content with a small, but dedicated team. Every donation we receive from users like you goes directly into promoting high-quality data analysis and investigative journalism that you can trust.Please support our work and keep this resource free. Thank you.

(TLB) published this article with permission of OpenSecrets.org

Reid Champlin is an investigative journalist covering campaign finance and foreign affairs. He’s a rising junior at the College of William and Mary studying government. Prior to joining the CRP in the summer of 2019, Reid was an inaugural VICE Collegiate Reporting Fellow covering mental health.

Journalist: NBC ‘Intimidated Me on Behalf of the DNC’

Inside the Temple of Covert Propaganda [..] UK’s Scandalous Information War