White House chief of staff Mark Meadows on Monday suggested that the Trump administration would bring a lawsuit against the social media companies that have recently restricted and blocked news reports about Democratic presidential nominee Joe Biden and his son Hunter.

In an interview on “Fox & Friends,” Meadows said that the online platforms try to censor conservatives and suggested that if the story about Joe and Hunter Biden was about President Donald Trump and his family, tech companies would have not blocked the story.

“They have two standards: one for one campaign, one for the other. But I do believe that additional lawsuits will be filed perhaps as early as today to go after that,” Meadows said.

“Listen, it’s not just the campaigns,” he added. “They’re now starting to censor, actually, reporters. That’s a dangerous place for them to go when they’re the arbiter of what they deem to be the truth.”

The Chief of Staff’s comments come in the wake of a report by the New York Post alleging to have obtained emails from a laptop belonging to Hunter Biden. Many Democrats have claimed the story is an effort to discredit Joe Biden and an attempt by Russia to help elect Trump. So far, neither of the Bidens have denied the authenticity of the emails.

Meadows said he has not received any intelligence suggesting that the Russians were involved in the emails being extracted from Hunter Biden’s laptop as Rep. Adam Schiff (D-Calif.) has alleged.

“All of this narrative that is out there that would suggest that it’s not real, that’s the disinformation. You know, Adam Schiff came on and said, ‘Oh, this is Russia, Russia, Russia,’ and again, I can tell you this is Adam Schiff once again trying to spin a story that’s not accurate.” Meadows said,

“I talked to director Ratcliffe over the weekend and I said, ‘Listen, if this is a Russian disinformation campaign, we need to make sure the American people know that.’ His response to me is that he had no knowledge of that.”

Schiff, who is the chairman of the House intelligence committee, has repeatedly asserted, without evidence, that the Trump 2016 campaign colluded with Russia and now is claiming that Trump is working with Russia to hurt Biden’s campaign.

“We know that this whole smear on Joe Biden comes from the Kremlin,” the California Democrat said on CNN last week, claiming that “the Kremlin has an obvious interest in denigrating Joe Biden,” and that “they want Donald Trump to win.”

When Schiff was asked about specific intelligence about the Kremlin’s involvement with disinformation about Biden, the Representative was unable to provide any evidence, saying that the Director of National Intelligence, John Ratcliffe was not “forthcoming” with intelligence.

“And frankly, we haven’t got much from the intelligence community very recently, which concerns me,” added Schiff.

Meanwhile, Ratcliffe (pictured below) told Fox News on Monday that there is no intelligence to suggest the Hunter Biden email scandal is led by Russia. 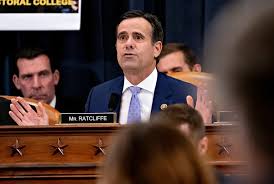 “It’s funny that some of the people who complain the most about intelligence being politicized are the ones politicizing the intelligence,” Ratcliffe said. “Unfortunately, in this case it is Adam Schiff, who said the intelligence community believes the Hunter Biden laptop and emails on it are part of a Russian disinformation campaign.”

He continued, “Let me be clear: the intelligence community doesn’t believe that, because there is no intelligence that supports that. And we have shared no [such] intelligence with Chairman Schiff or any other member of Congress.”

Why The Elite Hate Russia – Globalintelhub