A ship of fools setting sail on a collision course can only result in the sinking of the election process. Civil disobedience is a valid tactic to confront abusive power. However, to intentionally disrupt the Free Speech dialogue of a Presidential campaign misses the legitimacy of opposing truth to power. Donald Trump is not a public official and has no civic authority to demonstrate against. Yet, the brainless minions that make up the ranks of twisted lunacy are in the service of a Soros funded and nihilist agitator system, intent upon destroying America.

How long will the sane and contributing citizens tolerate the obvious outlaw subversion of this single embodiment of evil? Fostering anarchy as a method to force a candidate from the public arena is the pinnacle of totalitarian subversion. Serious nationals need to rally to the defense of their country. Understand who and what this seditious traitor is all about. Cliff Kincaid provides an excellent account and background on George Soros in Obama’s Master George Soros: Supporting America’s Enemies at Home and Abroad. Readers are encouraged to review this lengthy chronicle and sourced information.

World Net Daily published this account of Soros-funded group promises even more anti-Trump protests that provides a window on the perverted thinking behind just one of the Soros funded fronts.

“Mr. Trump and the Republican leaders who support him and his hate-filled rhetoric should be on notice after tonight’s events. These protests are a direct result of the violence that has occurred at Trump rallies and that has been encouraged by Trump himself from the stage. Our country is better than the shameful, dangerous, and bigoted rhetoric that has been the hallmark of the Trump campaign.”

But that’s nothing but codswallop, according to one award-winning journalist and author.

“The MoveOn director’s pious statement is total BS,” said David Kupelian, author of “The Snapping of the American Mind.” “The left prides itself on shutting down free speech with which it disagrees whenever and wherever possible. Trump’s boisterous speech has nothing to do with it – the proof of which is that the left constantly disrupts and shuts down speeches by conservatives and Republicans and even pro-Israel speakers on college campuses all across the country. It happens constantly; even the most ‘civil’ and ‘mild-mannered’ conservatives are violently shut down.”

Contrast the rational and factual assessment from Mr. Kupelian with the “PC” psychosis that underpins the warped distortions of the Soros serfs. This modern day Sheriff of Nottingham has the lowly peasants addicted to the illusion of collectivist prerogative, while mustering intolerant deference toward the only populist in the Presidential equation. SOROS GROUP CALLED ‘DEMOCRACY SPRING’ VOWS TO CAUSE CATASTROPHIC CIVIL DISOBEDIENCE TO STOP TRUMP, demonstrates greater adherence towards maintaining corrupt crony globalism than overturning the “pay to play” political kingdom.

Disturbing as this development presents, the next stage of disrupting has Thousands Pledge to Get Arrested in D.C. Protests Next Month, with the full intent to delegitimize elections and candidates that disagree with the Soros vision of insider controlled opposition.

“The leaders of Democracy Spring, a coalition of far-left groups plotting a mass civil disobedience movement to begin next month, told Breitbart News they have already confirmed 2,912 protesters who pledged specifically to risk arrest.

Those protesters signed an option on the coalition’s website explicitly stating, “I pledge to be one among thousands who will risk arrest to save democracy in DC between  April 11 – 16.”

Other pledge options for protests include:

*I pledge to come to Washington DC to support the sit in through legal protest but cannot risk arrest.

*I want to join the march from Philadelphia to Washington DC, sometime between  April 2 – 11.

*I want to volunteer to help organize this campaign.

Despite the fact that many of the main groups endorsing Democracy Spring are funded by billionaire Soros, the group complains that “American elections are dominated by billionaires and big money interests who can spend unlimited sums of money on political campaigns to protect their special interests at the general expense.”

The illogic of protesting the ONLY candidate who is self-funding his own campaign, while Soros spends his ill-gotten gain on advancing his crusade to dismantle the Republic is beyond belief. Maybe it takes a mind controlled and indoctrinated ivy league sophistic to buy into the absurdity of the misdirection from true and legitimate civil disobedience.

“Recently, Donald Trump campaign rallies have seen highly-coordinated and well-planned political demonstrations in Chicago, Cleveland, St. Louis, Dayton, and other cities. The rallies were disrupted by highly-coordinated and well-planned protesters waving freshly-printed protest signs before awaiting television cameras. Such “rent-a-mob” actions are trademark signs of the involvement of George Soros and the “godfather” of political street violence, Gene Sharp, in disrupting the normal political process.

One of the favored methods proposed by Sharp and embraced by Soros-financed groups is the taunting of individuals. Sharp’s advice to taunt speakers is being played out in the US presidential campaign: “instead of predominantly silent and dignified behavior… people may mock and insult officials, either at a certain place or by following them for a period.” Sharp suggests that taunting individuals, such as presidential candidates, be combined with a refusal to disperse when either asked or ordered to do so. Sharp claims that these methods are “non-violent.” However, when the US Secret Service, charged with protecting presidential candidates from assassination or bodily harm, order protesters to leave a campaign venue and there is a subsequent refusal to do so, violence is a certainty.”

Supporting Madsen’s content appears in ANTI-TRUMP PROTESTERS Admit Answering Craigslist Ad and Getting Paid to Protest Trump. Folks the money comes out of the pockets of Soros. Trump supporters go to his rallies to hear what he has to say. They do not organize to disrupt Hillary Clinton or Bernie Sanders town halls. This difference should be so self-evident that only a demented sycophant of the Soros creed of upheaval, could embrace the mental disease that these hooligan thugs foster.

In order to understand the reason Soros is aiming his arrows at Trump is explained plainly in Intelligence Briefing: Soros Next Target? USA.

“The reasons for this enhanced focus on stopping Trump are twofold. First, Trump is not controlled by the Oligarchy in America. While well to do by American standards, he is not on the level of an oligarch and therefore not controlled by their normal selection of a candidate process. Second, Trump proposes a dialog with Russia from a position of business like respect. This cannot be allowed under any circumstance, as the American Oligarchy needs a hostile climate to advance a new cold war that will save America’s collapsing economy with unparalleled new defense spending. Soros color revolution USA may yet end up being the least of America’s worries as one of it’s candidates may find the hardest part of being elected, is simply staying alive.”

If Trump is such a threat that his life is at severe risk on the campaign trail, just how much blame does Soros bear? Why is he above the law? It is obvious that as “a naturalized U.S. citizen, he took an oath stipulating “…..I will support and defend the Constitution and laws of the United States of America against all enemies, foreign or domestic; that I will bear true faith and allegiance to the same…..” He has violated his oath. At a minimum his citizenship should be revoked.”

Nonetheless, Human Events adds even more compelling reasons he is so dangerous. The most salient argument comes with his words. “Soros has repeatedly said that he sees himself as a messianic figure.  Who but a megalomaniac would make these comments?  “I admit that I have always harbored an exaggerated view of my self-importance—to put it bluntly, I fancied myself as some kind of god” or “I carried some rather potent messianic fantasies with me from childhood, which I felt I had to control, otherwise I might end up in the loony bin.”  If only the loony bin were an option.  As it is, one of the wealthiest men in the world is using his billions to impose a radical agenda on America.”

Here within lies the fatal attraction among most of his pawns that follow his subversive extremist groups. They all share in the lunacy and belong in a loony bin. But the reason that the establishment is so lenient on Soros’ treason is that they are closet globalists. Both partake in the same hatred for Trump for many of the same reasons. Their reasoning is to allow Soros’s gofers to marginalize, discredit or if necessary, eliminate the national and populist alternative. And all the time the mass media places the blame on Trump for the discontent. Such a scenario explains much, why the election is such a circus.

TLB recommends other great articles from The Sleuth Journal

About the author: SARTRE is the pen name of James Hall, a reformed, former political operative. This pundit’s formal instruction in History, Philosophy and Political Science served as training for activism, on the staff of several politicians and in many campaigns.

WARNING: There Is Going to be an Attempted Communist Revolution on Nov. 4 [by Daisy Luther/Video] 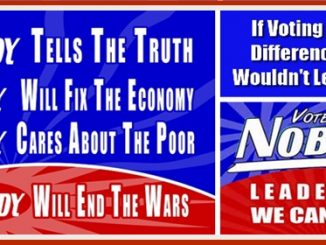 If Voting Really Made A Difference, Then They Wouldn’t Let Us Do It!