Federal immigration agents shouldn’t expect cooperation from local authorities when they begin a mass roundup of migrant families with deportation orders, an operation slated to begin Sunday at the direction of President Trump.

Several elected officials in cities expected to be targeted by U.S. Immigration and Customs Enforcement (ICE) have either condemned the impending arrests or said they won’t allow local resources to be used to assist the federal agents.

The operation is expected to target 2,000 families in up to 10 cities, including Chicago, Baltimore, New York, Houston, Los Angeles and Miami. On Monday, Trump announced via Twitter that ICE would be “removing the millions of illegal aliens who have illicitly found their way into the U.S.” 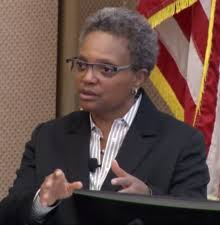 Chicago Mayor Lori Lightfoot [pictured] said in a statement that the city has taken steps to support immigrants families, and that ICE agents would get no assistance from the city.

“I reiterated that CPD will not cooperate with or facilitate any ICE enforcement,” said the first-term mayor. “I have directed – and Superintendent [Eddie] Johnson has confirmed – that CPD has terminated ICE’s access to CPD’s databases related to federal immigration enforcement activities.”

First the UK, then Scotland … then Texas?