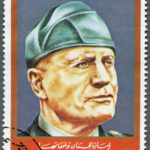 Headlines were made in Italy a few days ago when a “casual, unidentified photographer” happened to walk in the streets of Florence and had the uncanny ability of taking a snapshot of an inside wall of the Carabinieri barracks that are literally steps away from the city center. The flag was not hanging outside a window, as it was inside the private dormitory of military personnel, but it was partially visible from the outside as the window was open.

The drums of politically correct outrage (“a nazi flag in a Carabinieri barrack”) started beating in the media, and the frontrunner of this public outcry was the Minister of Defense, Roberta Pinotti (pictured).1) 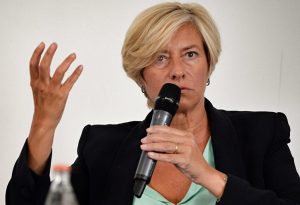 Pinotti is another minister in this fourth, consecutive non-elected government of Italy about whom one comes to wonder (not knowing Italy, of course) how she became head of such a sensitive department. According to her official resumé, she started her political career “from the bottom” within her party, that is the old Communist Party of Italy (PCI) which then transformed itself into the now Partito Democratico. With a degree in Humanities, she became a teacher in secondary schools, and worked her way up the ladder of local politics in the Genoa district. So much for an extensive and consolidated expertise in military affairs.2)

The day after the first headlines, somebody started to question the minister’s knowledge not just about the single episode but about flags and symbols in general. She joined the public outcry without the slightest investigation into the case, after having heard from the news that “a Nazi flag”, was “spotted” at a Carabinieri barrack in Florence. It turns out that the flag is simply a historic Reichskriegsflagge of Germany’s Imperial Navy, never used by the Nazi regime (1933-1945).3)

Pinotti makes no apologies for her lack of knowledge about historical flags nor for her impromptu behaviour, which, given her official position with direct jurisdiction over the Carabinieri (which is a military corp) would have called for a more careful investigation prior to an expected official statement. “It’s a flag often seen at neo-Nazi rallies in Germany”, quips the minister, and that’s enough to satisfy her ego and to placate the politically correct media.

Much ado about nothing, then? Not quite. The episode is only the latest of a trend that is picking up momentum in Italy. Without boring the reader with extensive socio-anthropological dissertations, the explanation of this latest witch-hunt (or “fascist-hunt” if you will) could be dramatically simple. The center-left coalition forming the fourth-in-a-row-of-non-elected Italian governments is perceiving a looming defeat in the upcoming general elections of 2018, and is taking countermeasures.

Recent local elections in various parts of Italy have firmly confirmed that even in traditionally leftist areas of Italy, the forced invasion of “migrants” from Africa is a disaster and a threat to the welfare of Italians, especially those of the lower classes. Therefore a new “enemy” capable of recreating a credible coalition had to be found, and in a hurry. So why not bring back to life the “good-ol” ghost of fascism always looming in Italian political life? After all, good zealots (or useful idiots) to this cause can always be recruited.

Italy still has a plethora of associations of “veterans”, whose existence is guaranteed by generous, if not lavish, state funding. Some of these associations are anachronistic if not outright ridiculous. It goes from the “Veterans of Garibaldi” (19th century) to the “Veterans of the anti-fascist war in Spain” (1930’s), to “Federation of volunteers for freedom,” to others whose name would require a line just to copy. You may wonder what’s the use for the government of all these “veterans”, whose actions in the battlefields for the cause of “freedom” are not to be questioned.4)

You guessed right. All these associations simply constitute a sure reservoir of votes for a center-left government, and as such, they must be kept alive with public money, and lots of it. Then you have, at the forefront of these groups, federations, associations and what not, the leader group: ANPI (Associazione Nazionale Partigiani Italiani), the Partisans who fought fascism in the civil war between September 1943 and the spring of 1945. ANPI can be compared to Pavlov’s dogs: whenever the word “fascism” is heard, ANPI can be called for action to reestablish the dogma of truth with uncompromising faith and devotion to the cause of “antifascism”. 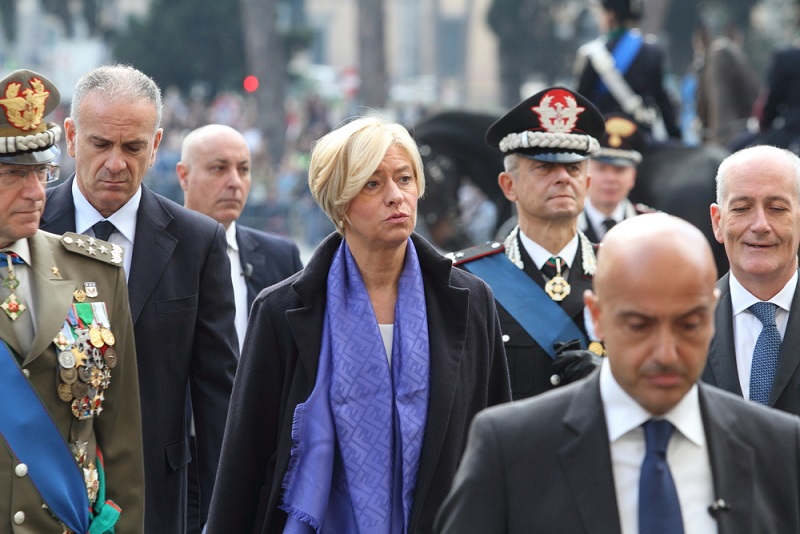 Never mind that anagraphical reasons would suggest that all these partisans should all be gone or have reached an age at which “militant political activities” would be discouraged by their geriatric doctors. All these associations have found the “rightful heirs” willing to pass on the torch of truth and justice (and get the money) for future generations.

Finally, you have those like Laura Boldrini and Emanuele Fiano who have turned “militant antifascism” from a cause to a personal obsession. “Presidentessa” Boldrini, with a keen sense of reality, has gone as far as to call upon a sort of tabula rasa toward all public buildings dating back to the fascist period: practically entire sections of Italian cities would be demolished, from train stations to public libraries and schools, not to mention the headquarters of ministers and even of the Italian postal service.5) 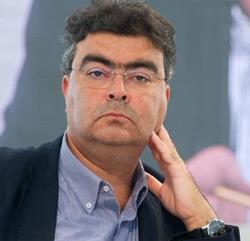 Emanuele Fiano (pictured) is on a personal crusade. He comes from a Jewish family and his father was the sole survivor of the entire family deported to Auschwitz. His political history has gone from being a Jewish activist to being nominated in the Italian chamber of deputies member of PD (Democratic Party). In September 2017 the Italian parliament approved a law, introduced by Fiano, that would make it illegal for anyone to display “any” sign of propaganda related to the fascist regime, whether it has to do with the production and distribution of any object that can be related to Fascism or showing on “public display of Fascist signs” like (we imagine) raising your right arm above a certain height in what may be considered a fascist salute, even if you are simply asking for a cappuccino. Such heinous criminal acts can be punished with jail terms ranging from six months to two years.6) 7)

Italy has well over 7 million of its citizens officially classified in a “condition of absolute or near absolute poverty”. Translated in simple English, it means that more 10% of Italians cannot have the “luxury” of three decent meals a day, buy basic items, afford a dentist or a medical treatment not covered by the public health care system. More and more Italians, even many who had a relatively middle-class status until only a few years ago are now forced to ask for basic food items at the various charity centers.8)

But “Presidentessa” Boldrini and Emanuele Fiano cannot waste their precious time on these trivialities. They are set on a mission (and paid well over €10,000 EUR per month by Italian taxpayers for their mission) to finally rid Italy of any nefarious memories of its evil past. When their mission is accomplished, and each and every sign of fascism has been erased, we are sure that poverty in Italy will also disappear, and social justice will triumph.

Every Italian is therefore duly warned: if next elections bring defeat to the present never-elected center-left coalition and all their “veterans”, Fascism is assured to be back in Italy, just waiting outside the door.

Mass migration should be accepted by Western states – UN Secretary

Former Czech President denounces the direction of the EU