It isn’t a small minority anymore asking our regulators to limit biotech’s far-reaching arm. There is now an open letter endorsed by more than 59 million people asking both US and UK officials to be more prudent in questioning the hazards of genetically modified crops.

The open letter is signed by celebrities, scientists, farmers, academics in various fields, business tycoons, and every day people like you and me. It’s called the letter from America, but it is getting global attention. No longer can Americans be called sheeple. We are clearly voicing or disdain for GM crops in ever growing numbers, and our eyes are wide open.

“We’ve had GMOs in the US for nearly 20 years. Instead of bringing certainty and security they have raised more and more worrying questions about their effectiveness, their necessity, and even their safety. Polls show that the majority of US citizens – and in fact citizens everywhere – either want them labelled or taken out of the food system altogether. It’s important to keep pressing our elected representatives to act in accordance with this strong public mandate.”

The letter points out the alarming take-over of the American farming system by GMOs stating that in the US, 94% of the soy, 93% of corn (maize) and 96% of cotton grown is all genetically modified. It is clear that this only happened with the power of biotech lobbyists and the infiltration of our government agencies.

Despite biotech monopolies on farming and seed, polls repeatedly prove that 72% of Americans do not want to eat GM foods and over 90% of Americans believe GM foods should be labeled! 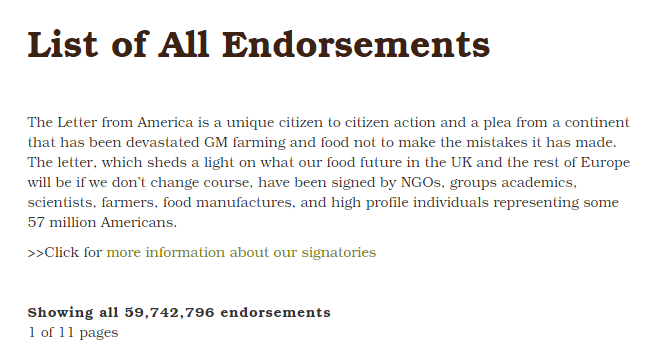 Our governments are not representing the people – but the biotech companies who have paid for their providence over us.

The letter also reminds its recipients that GM crops were allowed into the market with promises of increased yields and decreased pesticide use – and they have failed at both.

If the United States Department of Agriculture was the CEO of a company that had promised its shareholders this kind of performance and had failed as badly as biotech has (with the USDA and FDA’s permission) – it would have been fired long ago.

Biotech seeds cost more (3-6 times more than conventional seeds) and the pesticides and herbicides that must be purchased to ensure their growth account for a considerable cost – both monetarily and to the health of people around the world.

The letter goes on to detail damage of GMOs to human health, and the degradation of the environment, as well as the overall denial of science which has proven both of these phenomenon to be accurate. There is no ‘independent’ research which our agencies will accept. Any studies which raise cause for concern are thrown out or ignored, and studies conducted by biotech itself are heralded as the next ‘proof’ that GMOs are ‘safe’ or ‘equivalent’ to real food.

The letter calls for us to speak out – and so we have – by the millions:

“We strongly urge you to resist the approval of genetically modified crops, to refuse to plant those crops that have been approved, to reject the import and/or sale of GM-containing animal feeds and foods intended for human consumption, and to speak out against the corporate influence over politics, regulation and science. . .

If we work together, however, we can revitalize our global food system, ensuring healthy soil, healthy fields, healthy food and healthy people.”

Be sure to add your endorsement here, US citizens, or if you live in Europe, you can email your MP via the same link. They can’t continue to ignore the masses. Keep voicing your concerns and ‘voting’ with your dollars and pounds. We won’t stop until all GM crops are destroyed, and the natural world is replaced with real, nutritious, organic food.

How GMO’s Contribute to Environmental Damages

Royal Society must end its partisan, unscientific support for GM crops and food