Apple permanently banned Alex Jones’ Infowars app from its App Store late Friday, depriving the conservative host one of his last remaining conduits to reach a mainstream audience. The New York Times reports that an Apple spokeswoman said the app was removed under company policies that prohibit apps which contain content that is “offensive, insensitive, upsetting, intended to disgust or in exceptionally poor taste,” however she did not note what specific content resulted in the app’s removal.

Jones and his empire have also been banned from YouTube, Facebook, Google Podcast, Spotify, iHeartRadio, MailChimp, Disqus, Linkedin, Flickr, Pinterest and several others in what silicon valley swears wasn’t a coordinated “unpersoning” of Jones.

“Because I play devil’s advocate, because I play both sides, they’ve taken me out of context, they are using me as a test case to try to bring an EU style web censorship,” Jones said several weeks ago. “They’ve got mainline Democratic senators saying they ought to restrict Fox News, Tucker Carlson, Matt Drudge, the President himself. They are misrepresenting what I’ve said and done and are using that to set a precedent for internet wide de-platforming, censorship beyond what Russia does, what China does, ahead of the midterms (election). The whole thing is fake.”

Apple’s app removal comes just over a month after the company removed his from the iTunes service on Aug. 5, while leaving his app in the App Store.

On Thursday, one day after Twitter CEO Jack Dorsey appeared on Capitol Hill to tell lawmakers how his company doesn’t discriminate against conservatives, the company permanently banned Jones from the platform for insults hurled at CNN’s Oliver Darcy on Wednesday.

Twitter told the Daily Beast that the final straw was when Jones said of Darcy and CNN:

“Look at this right here. Goes around policing and calling for censorship, and then claims that Trump’s wrong – there’s no censorship of conservatives. You are incredibly shameful man. You’re just – look at you. You are literally an anti-American, anti free speech coward. You’re going to go down in the history books as the criminal news network.

“Those are the eyes of a rat,” Jones added.

Oddly, Darcy tweeted an article about Jones’s banning within 60 seconds of Twitter’s announcement. A collusion of sorts? Someone has thin skin. 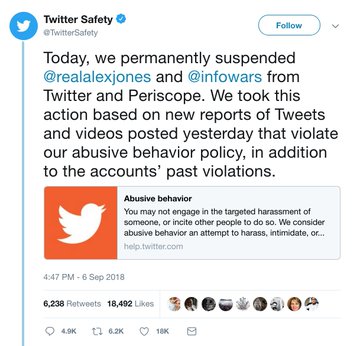 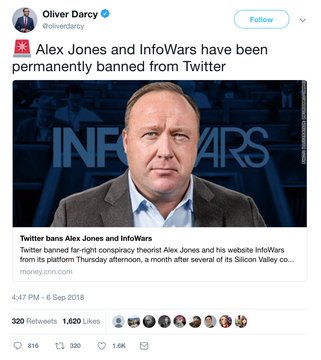 Not only was Jones booted from Twitter – the company said they will monitor any attempts to circumvent the ban.

[T]his time, Twitter went a step further , saying it will continue to monitor reports about other accounts potentially associated with Jones or Infowars and will “take action” if it finds any attempts to circumvent the ban.

In a voicemail left with The Associated Press, Jones expressed disbelief that the incident with Darcy could have led to his ban. “He says horrible lies about me and edits things I’ve said,” Jones said. “He’s the one that’s been abusing me.” –ABC

Remember when the ACLU would have raised hell over something like this?

(TLB) published this article from ZeroHedge as compiled by Tyler Durden with our appreciation for the coverage.