A year ago the mainstream media treated the Biden-Ukraine scandal as a crank conspiracy theory that belonged only to remote corners of the internet. But now, headed into the Iowa caucuses, the mainstream is finally and much-belatedly peppering Joe Biden with the relevant questions. ~ZeroHedge

On Monday morning the Today show aired a testy interview between the Democratic presidential candidate and co-anchor Savannah Guthrie. In a rare moment, Guthrie pressed the 77-year old candidate on the issue, saying the irony of the Trump impeachment proceedings is that they shine an uncomfortable light on Hunter Biden’s high-paying job on the board of Ukrainian natural gas firm Burisma Holdings.

Despite what appears his best efforts at straining to control his temper, Biden snaps at one point. With an exasperated look on his face he shoots back: “You’re saying things you don’t know what you’re talking about!”

.@JoeBiden snaps at @SavannahGuthrie after she asks about Hunter Biden: “You’re saying things you don’t know what you’re talking about!” pic.twitter.com/4O4LmLNenb

“This process of impeachment has ensured that everyone knows about Hunter’s dealings with Ukraine,” the Today show co-anchor introduced.

“Do you think it was wrong for him to take that position knowing it was really because the company wanted access to you?” Guthrie asked.

“You’re saying things you don’t know what you’re talking about!”

Biden followed up with claiming “no one has found anything wrong with [Hunter’s] dealings with Ukraine, except it sets a bad image.”

Noting the “sleazy” optics, Guthrie pressed further. “Was it right?” she asked.

“He says he regretted having done it,” Biden said. “[He] speaks for himself. He’s a grown man.”

The testy exchange clearly sent Joe Biden fuming, in an unusual mainstream moment in which the NBC co-anchor took the Burisma scandal and Biden’s alleged personal meddling in Ukraine’s affairs seriously enough to ask the former Vice President point blank about it.

.@JoeBiden snaps at @SavannahGuthrie after she asks about Hunter Biden: “You’re saying things you don’t know what you’re talking about!” 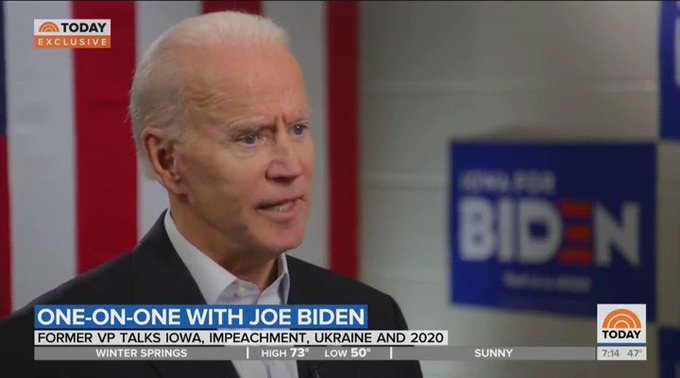 Judging by how nervous and immediately agitated he got, it’s a question and subject that reporters should have been peppering him with long ago.

Commentators on Twitter noted that despite decades in past campaigns and as a seasoned political office holder, Biden is not used to fielding tough or pointed questions from the press.

Senate Report On Biden-Ukraine Accusations To Drop Within Days [Video]

… John Brennan Suggests He May Have Received “Bad Information”…