Amid reports that Twitter’s mass-layoffs will ‘break’ the platform, allowing ‘free speech types’ to run amok, CBS News has stopped posting on the social media giant out of an “abundance of caution.”

In a Friday announcement during the evening broadcast of “CBS Evening News with Norah O’Donnell,” the network’s national correspondent, Jonathan Gigliotti, said: “In light of the uncertainty around Twitter and out of an abundance of caution, CBS News is pausing its activity on the social media site as it continues to monitor the platform.”

Coverage began with the network reporting on the mass resignations of employees offended by Musk’s “ultimatum” from earlier this week. In his quest to streamline the company, the world’s richest man emailed all employees asking them to commit to an “extremely hardcore” workload or leave the company.

The “ultimatum,” as many disgruntled folks called it, prompted backlash from onlookers who trashed the company under Musk, some calling it a “hellscape.”

The ensuing chaos from Musk’s email, as well as the general vitriol generated by him taking over the reins of company, did not sit well with CBS News.

And as Adweek notes, the move will affect all CBS-owned properties, including local news outlets.

In light of the uncertainty around Twitter and out of an abundance of caution, CBS News Bay Area is pausing its activity on the social media site as we continue to monitor the platform.

On Thursday, Twitter was hit with mass layoffs after many employees refused to accept Musk’s new demand, which would have required them to work for long hours at “high intensity.”

The departure of those employees resulted in speculation that the website would become more unstable and could potentially cease functioning.

Fortunately, none of that has come to pass, but the uncertainty following Twitter has caused one news organization to take action. -Adweek

Tens of fans are crestfallen, we’re sure.

Wall Street Silver@WallStreetSilv
·
CBS (allegedly) has 8.8 million followers on Twitter, and almost no engagement on their tweets. The evidence suggestions CBS News paid for bots to make their account appear larger than it really is. This is common for all of the legacy media, low engagement. 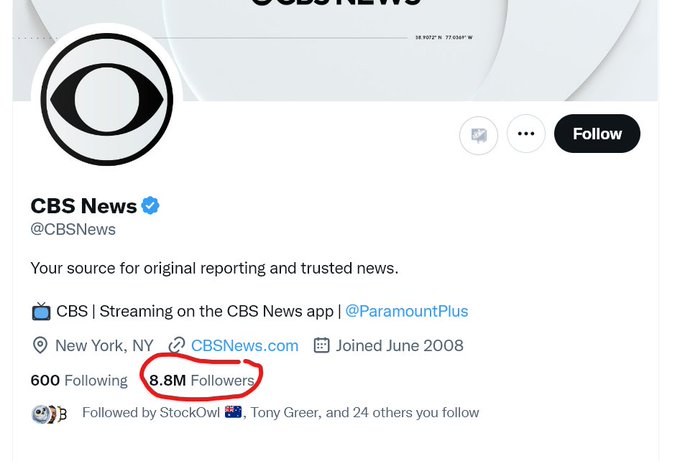