In an interview Wednesday with RT, world-renowned linguist and dissident intellectual Noam Chomsky said that the inevitable impacts of neoliberal policies are driving the rise of Europe’s far-right and threatening the collapse of the European Union, something he said would be “a tragic development.” 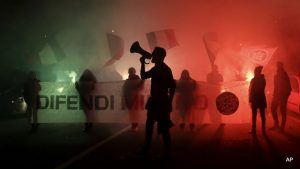 CasaPound right-wing demonstrators outside the former Montello barracks, where migrants are being transferred by Milan’s prefecture, in Milan, Italy, Monday, Oct. 31, 2016.

He said that post-World War II European integration was “designed to be dysfunctional” by creating a common currency without corresponding democratic controls meaning that “in Europe whoever is elected, no matter where they are on the political spectrum, the policies are going to be the same because they are not determined by the populations in their countries” but instead by “unelected bureaucracies.”

This neoliberal attack on democracy, Chomsky said, “has been exacerbated by extreme forms of austerity imposed particularly since 2008. Even International Monetary Fund economists recognize that this is economically absurd, but the IMF political actors are different and reject their own economists’ advice and this has been very harmful to democratic participation.”

Chomsky went on to point out that these policies are leading to the dramatic rise of Europe’s far right. “The French election that’s coming up there are basically two candidates one of them ultra-right, the other far-right, both of them to the right of the U.S. political system. It’s a pretty dramatic fact. In Austria the candidate of the Freedom Party, which has neo-Nazi routes, may win the presidential election,” Chomsky said.

Chomsky’s comments are echoed in a new study by major European foundation Bertelsmann Stiftung which, after a massive survey of European public opinion, found that extreme-right populist parties – such as the National Front in France, and Germany’s anti-immigrant Alternative for Germany party – are benefitting from the “recruitment of worried citizens,” who have been made vulnerable by the neoliberal demand for domestic austerity policies.

ER recommends other articles by Mint Press News, and teleSUR where this article originally appeared

Five Years Ago: Regime Change at the IMF – Christine Lagarde and The Frame-Up of Dominique Strauss-Kahn

France’s New Labor Laws: Casualization as a Social Model in France? Definitely Not!