Here is a summary of points made in the highly interesting video discussion from The Duran team below, although we do recommend listening to the fine tuning of Alexander Mercouris’ breakdown:

Salvini, who leads Italy’s most popular party, the League, said that the decree does not go far enough in locking down the country to stop the spread of the virus which has topped over 10,000 cases this week.

“Doctors ask us to close everything that is not strategic for the country for the sake of public health. Then I read the decree and saw that in the industrial sector, in transport, it’s all open: in Milan, the subway is crowded,” he added.

The former interior minister went on to say that while currently many European Union member states have sealed off their borders with Italy, in the coming weeks it may be that Italy is forced to close its border if cases within the country are brought under control. 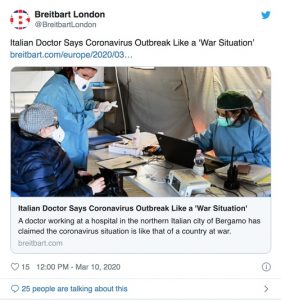 On Facebook, Salvini described the coronavirus situation as like being at war, a sentiment shared by some doctors in Italy, and warned that the death toll would exceed 1,000 by the end of the week. The 1,000 number was reached later that same day.

Salvini had slammed the government of Prime Minister Giuseppe Conte in late February over the handling of the outbreak, saying: “It is essential that, from today (if they haven’t already done it yesterday), anyone who enters Italy, by any means of transport, from the raft to the aeroplane, be checked. And if it comes from some areas, it will be isolated for fifteen days. As other countries do.”

After the outbreak became more widespread, Salvini then offered to join the government in a national unity coalition but members of the Democratic Party and Conte rejected the proposal.

COVID-19 is close to losing its epidemic status in the U.S. – CDC

THE DIRTY DOZEN THEN SOME

US Healthcare Subject To China’s ‘Global Chokehold’ On Medicines