‘Curiouser and Curiouser’: Salisbury, the Skripals & the epic failure of the British Fairy Tale

“Why, sometimes I’ve believed as many as six impossible things before breakfast” – Alice in Wonderland. The problem for the British narrative in the Skripal case is that one would have to believe way more than six things.

Let me start with the latest: the taxpayer-funded purchase for more than one million pounds of the homes in Salisbury of the British spy Sergei Skripal and the police officer Detective Sergeant Nick Bailey. This purchase is explained as necessary on security grounds and – some suspect – may be followed by the destruction of both houses and all the evidence therein.

This is difficult to explain in the absence of a state purchase of the Zizi’s Pizza Restaurant where Skripal and his daughter Yulia ate what could have very well ended up being their last meal, and where they spent at least as much time as DS Bailey could have been in touch with the pair. Ditto the pub the Skripals visited before repairing for lunch. And anywhere else they went after leaving their door handle on which was smeared in gel form the strangely innocuous Novichok(ish) which killed none of the people who ingested it.

This presupposes that DS Bailey was never in the Skripal house but was – oddly, given his rank – merely a first responder on the park bench where the Skripals slumped at exactly the same time and in the same form, despite their differences in age, height, and physical form – itself difficult to understand if both were affected by the Novichok(ish) several hours before from the doorknob.

Neither Skripal showed any signs of having been affected in the pub, or wherever else they visited en route to Zizi’s, or in the restaurant, or even in the only short piece of CCTV footage seen in the public domain after they had left the restaurant but before they reached the park bench on which they slumped five hours after leaving their doorknob.

IF all of the foregoing is a truthful account of what happened, then one thing is now the settled will of the majority of thinking people in the United Kingdom – even in Salisbury – whatever else was on the doorknob it was not a “deadly military grade nerve agent… of a type developed by Russia.”

Because, if it had been, they would have both been dead in the short walk from the doorknob to the car or certainly before they had driven to the end of their street. They would have been found dead either on the garden path or slumped behind the wheel of their car, not five hours later on a park bench – very unwell but now thankfully apparently well again – and in Yulia’s case looking the very picture of health.

Sergei, of course, we have not seen, but given his discharge from hospital just a few days after Yulia’s, it is logical to infer that he too has made the same Lazarus-like resurrection from what we had been told was his imminent deathbed just the day before Yulia’s now famous telephone call with her cousin in Moscow.
But IS what we have been told about the chain of events the truth? I have met no one, literally no one, who believes so.

And NO evidence, none whatsoever, has been produced by the government or any state authorities which gives the slightest justification to Theresa May’s rush to judgment and blame issued peremptorily against the Russian Federation and – in the mouth of both the foreign secretary and the defense secretary – against President Putin himself.
It is established by the very fact the Skripals survived that what struck them was not Novichok. 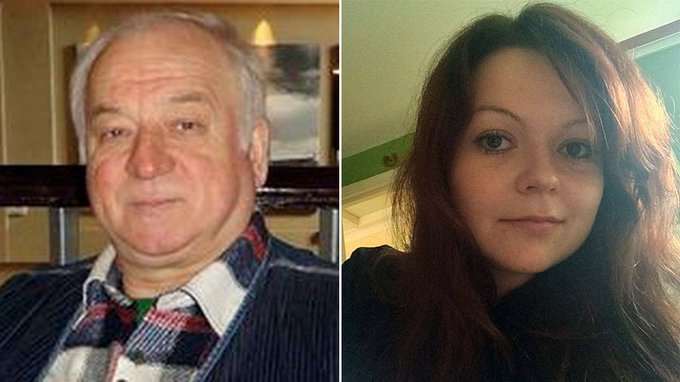 Even if it had been, it is untrue that the family of nerve agents called Novichok was “developed by Russia.” It was developed by the USSR, and not in Russia but in other republics, including the now-Western ally Ukraine and Uzbekistan. Its stockpiles were certified, destroyed by the Organisation for the Prohibition of Chemical Weapons (OPCW). Former British Ambassador to Uzbekistan Craig Murray attended a reception for the UN chemical weapons watchdog in Uzbekistan as they celebrated the successful conclusion of this work.

One of the leading Russian scientists in the Soviet-era Novichok team moved to the United States where he published a book containing the exact chemical formula needed to make Novichok. The book was available on Amazon. One eminent US scientist I interviewed on my radio show by phone from the United States told me that ANY of his undergraduate students could make Novichok and so could any university chemistry student anywhere in the world.

But it was not Novichok or any “military-grade nerve agent” which struck the Skripals – if it had been, they would be dead. I repeat that for emphasis.

But the other parts of Mrs. May’s narrative haven’t fared any better.

It was claimed by the PM that “only Russia had the motive” to attack Sergei Skripal. But this is clearly ridiculous as I said at the time. On the principle of Cui Bono, i.e. who benefits from this crime, obviously Russia, days before its presidential election and exactly 100 days before the World Cup opening ceremony, had the least to gain from carrying out this crime – certainly at that time.

Russia could have attacked Sergei Skripal at any time, with no collateral damage to his daughter or a passing policeman, either long before or alternatively after the World Cup. Simple logic demanded at least the consideration that the crime may have been carried out by someone or some state which sought to damage Russia. The faked murder of the Russian journalist Babchenko in Ukraine in May being such a case in point.

Moreover, the whole principle of spy swaps would have been gravely undermined by a Russian state attack on Skripal, if not rendered otiose entirely. After all, what spy is going to agree to be swapped if his fate is sealed in an agonizing demise even many years down the line? For that reason, Russia has never attacked any foreign agent released in a spy swap.

But such simple logic was never deployed in Mrs. May’s rush to judgment.

Now that could have been mere incompetence – full disclosure, having known personally every British prime minister since Harold Wilson, I generally lean to the cock-up rather than the conspiracy theory of politics – or it could have a predetermined plot to justify the deliberate escalation of tensions with Russia either unilaterally as a diversion or in cahoots with the cowboys of the US deep state currently utterly mesmerized by the Russian Bear. Either way, it hasn’t worn well.

Not the least of the reasons so few people in Britain are sold on the state narrative of what happened in Salisbury is the complete absence of any journalistic enquiry – an absence entered into either voluntarily or by compulsion. No pressure by the press on the hospital, on Porton Down, on the security services, on the government, on Whitehall. Just a deep, silent and growing chasm.

Again full disclosure, I broadcast sometimes daily on a Rupert Murdoch-owned national radio station – TalkRadio – and I have often raised the Skripal case on my radio shows and have never been asked, let alone told, not to. But I am the only one. Perhaps the government knows that any attempt to serve a so-called D-Notice on me would occasion my mounting the plinth in Trafalgar Square to defy it. Or perhaps they have other plans, I don’t know. But apart from my own regular exposure of my doubts and now certainties on the Skripal case there has been absolutely no “mainstream” radio, television or newspaper discussion questioning the state narrative by any other commentator.

The British people are not fools, far from it. They are used to a raucous media, screaming tabloid enquiry and a fading but still extant tradition of investigative journalism. In its absence, the public have drawn the obvious conclusion.

So what did poison the Skripals and DS Bailey, who carried out this attack, and why?
And why are we paying such a high price to own their houses?

To take the last point first, it seems overwhelmingly likely that these houses are being bought to purchase the silence of the parties involved. There can be no “security” reason for doing so in the absence of the destruction of Zizi’s (who might well have welcomed it!). We must assume that DS Bailey – uniquely for a police hero who has been attacked in the course of his duty – has settled not for the reward of a grateful nation and a place on the pantheon as a public defender, but for lifelong obscurity, and a half million pounds or so.

Equally, it seems unlikely that Yulia’s cousin will be hearing from her again.

As to who, what and why – perhaps, we will never know. But last week on RT, the most plausible theory from the most credible source I’ve yet heard finally emerged.

I have worked with Pulitzer Prize-winning American journalist Seymour Hersh before and closely, almost 30 years ago. That work is worth retelling on another occasion. Suffice to say that Hersh is no journalistic trifle. He is of impeccable, near Olympian, standards.

Hersh claimed last week that the Skripals were attacked by Russians, just not the Russians identified by Mrs. May. But by Russian criminals, organized criminals, Russian Mafia criminals. The reason? Well, Hersh believes because the British security services had reactivated the bored (or broke) Sergei Skripal to begin working again, this time in cracking down on the nest of oligarchs and their often criminal money and enterprises operating in London.

I don’t know this to be true, but it has the ring of truth. A far clearer ring of truth than anything I’ve heard from the British government.

(TLB)  published this article from RT with our thanks for the available coverage.

George Galloway was a member of the British Parliament for nearly 30 years. He presents TV and radio shows (including on RT). He is a film-maker, writer and a renowned orator.

Why is Everyone Leaving CALIFORNIA, and Where Are They Leaving To? [Video]

The Supers Are Back: DNC Members Planning To Block Sanders . . . Again