From Helen Buyniski in an opinion piece for RT titled The new EU copyright law closes the book on free speech online. That’s a feature, not a bug:

The controversial copyright law facing a final vote in the EU parliament is less about copyright than it is about hammering a final nail in the coffin of the freedoms the internet once promised. Yes, Article 13 is that bad.

This is not just a European problem. Like a catastrophic nuclear meltdown, there is no containing the fallout from this kind of measure, designed to effectively destroy the internet as we know it. Companies and platforms may start by leaving Europe, or refusing to serve European customers, but the internet has no borders, and the big platforms will embrace whatever filters are required to maintain their hold on their users – no matter what country they inhabit. One need only witness the absurdity when Canadian, American and Australian Twitter users are sanctioned for violating Pakistani blasphemy laws to understand the willingness of these platforms to cater to the most oppressive common denominator.

The European Parliament has voted to adopt the highly controversial Article 13 provision, which would govern the production and distribution of content online under the auspices of increasing copyright protections.

Tuesday’s move will update the EU’s 20-year-old copyright rules and will govern audiovisual content, much to the dismay of many social media users who have already begun outpouring their grief online. 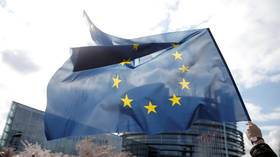 A protester in front of the European Parliament as MEPs debate on modifications to EU copyright reforms in Strasbourg. © Reuters
.

However, the parliament said in a statement that sharing memes and gifs has been protected “even more than it was before” and they will continue to be available and shareable on online platforms.

MEPs passed the legislation by 348 votes to 274 Tuesday. Opponents had hoped for last-minute amendments to be made but their efforts were in vain. 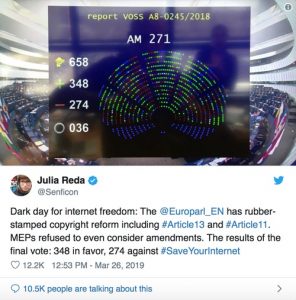 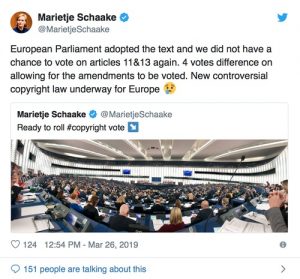 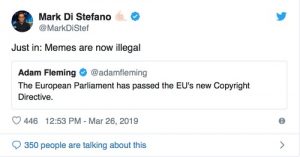 Julia Reda, a German MEP with the Pirate Party, described it as a “dark day for internet freedom.”

Article 13 or ‘The Directive on Copyright in the Digital Single Market’ makes all platforms legally responsible for the content hosted and shared on their platforms.

The process of updating the bloc’s copyright laws began in the European Commission two years ago, ostensibly to protect Europe’s publishers, broadcasters and artists and guarantee fair compensation from big tech companies.

The onus will now be on tech companies to clamp down on content-sharing on their platforms, which will likely ensure yet more draconian policing of speech and content.

EU member states now have two years to pass their own laws putting Article 13 into effect.

Tens of thousands marched in protest across Germany ahead of the vote, decrying what they viewed as severe online censorship.

Tech giant Google said that while the directive is “improved,” it will still lead to legal uncertainty and will damage Europe’s creative and digital economies.

Critics have argued that the only way for Article 13 to be effectively enforced would be through the use of upload filters which automatically check content to see if it’s copyrighted or not, at least in theory. However, the exact mechanics of such a system have yet to be fully debated and the potential for abuse is immediately clear.

‘Brains linked to computers will kill our inner freedom’