The power DASH cryptocurrency is not only taking the control of money back from the establishment and giving it to the people but it is also doing the same thing with information.

By Matt Agorist
It is no secret that over the last 4 decades, mainstream media has been consolidated from dozens of competing companies to only six. Hundreds of channels, websites, news outlets, newspapers, and magazines — making up ninety percent of all media — is controlled by very few people—giving Americans the illusion of choice.

While six companies controlling most everything the Western world consumes in regard to media may sound like a sinister arrangement, the Swiss Propaganda Research center (SPR) recently released information that is even worse.

The research group was able to tie all these media companies to a single organization—the Council on Foreign Relations (CFR).

In January, WikiLeaks’ Julian Assange called attention to this control in an damning tweet. 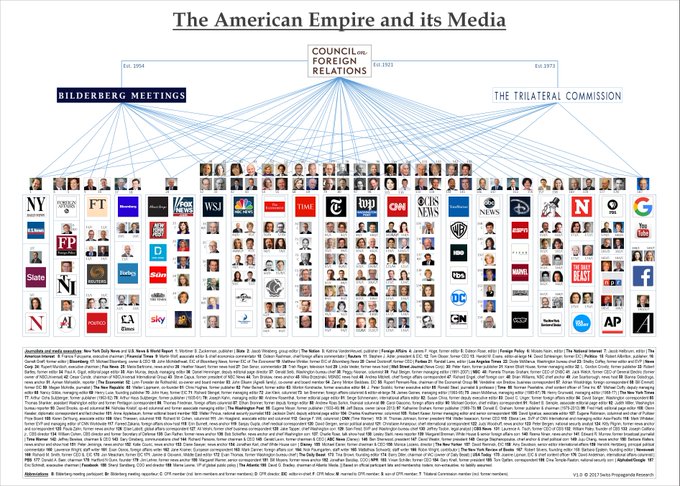 For those who may be unaware, the CFR is a primary member of the circle of Washington think-tanks promoting endless war. As former Army Major Todd Pierce describes, this group acts as “primary provocateurs” using “‘psychological suggestiveness’ to create a false narrative of danger from some foreign entity with the objective being to create paranoia within the U.S. population that it is under imminent threat of attack or takeover.”

A senior member of the CFR and outspoken neocon warmonger, Robert Kagan has even publicly proclaimed that the US should create an empire.

The narrative created by CFR and its cohorts is picked up by their secondary communicators, also known the mainstream media, who push it on the populace with no analysis or questioning.

When looking at the chart from SPR, the reach by this single organization is so vast that it is no mystery as to how these elite psychopaths guide Americans into accepting endless war at the expense of their mothers, fathers, sons, and daughters.

While this may seem like a bleak scenario, the fact is that this battle over information is centuries old. Just as the Anti Federalists fought to inform early Americans over the dangers of a constitution without a bill of rights, those who’ve longed for freedom and liberty have continued this information war up into the 21st century — affecting massive changes in their wake.

Indeed, as Samuel Adams famously said, “It does not take a majority to prevail… but rather an irate, tireless minority, keen on setting brushfires of freedom in the minds of men.”

These brushfires have been so effective at maintaining the ideas of freedom that the establishment control over information has continued to clamp down to prevent them. We are currently witnessing this control increase at an ever accelerating rate.

Ideas that threaten the establishment, like calling out the corruption in both parties (alternative media), or participating in cryptocurrencies which take away their power by stripping them of their control of money — are quickly finding themselves in the cross-hairs of the Praetorian guard who wishes to keep the flow of information and money under the grip of the status quo.

Google, Facebook, Twitter, and others have all recently moved to ban the advertisement of cryptocurrencies while simultaneously attacking information that challenges the establishment. Their intent is clear.

The good news is that there have been people not only watching this control increase but building a new system to directly compete with it. This new system functions outside the constraints of the old.

To clamp down on alternative media, the guards of information within the establishment attempt to censor, defund, and even ban peaceful organizations whose only “crime” is challenging their control on information by proposing alternate viewpoints.

While Facebook and Google has been spying on users and censoring their information — all the while making hundreds of billions of dollars doing it — an intelligent and peaceful resistance has been pining away to combat it.

One extremely powerful example of this resistance to those who wish to centralize control of money and information is DASH digital cash. While DASH is a cryptocurrency at heart, it has evolved into something far greater.

Most of our readers will recall Ben Swann’s hit series “Reality Check” and how it disappeared from the airwaves last year causing quite a stir. Conspiracy theories abounded about how he was taken out for reporting the truth when, in reality (no pun intended), he was canceled because he challenged the status quo.

Thanks to DASH that has all changed.

Using the Dash Treasury, holders of Dash formed a partnership with Swann to fund the production of his show.

As Joël Valenzuela points out:

The Reality Check relaunch proposal ranks as one of the largest to date in Dash’s history. The show previously reached many millions of viewers, and Swann remains confident that similar results will be achievable with the relaunch.

Now, the Free Thought Project has done the same thing. On Saturday, DASH and TFTP formed a partnership that will continue to spread the ideas of peace and freedom while simultaneously teaching people how to operate outside of the establishment systems of control like using cryptocurrency instead of dollars.

On a daily basis, TFTP receives messages and emails from people asking what they can do to peacefully fight the establishment. Many people feel that being an individual doesn’t allow them to have any influence. However, that is not the case.

As Samuel Adams said above, it only takes an irate minority. You can be the change you want to see right now. It is as simple as choosing to abstain from the violent corrupt old system and participating in the new and peaceful system that hands the power back to the people. DASH is this system. DASH digital cash takes the control the banking elite has over money and gives it back to the people. It is the ultimate weapon in the battle against the money changers and information controllers.

If you’d like to start your own DASH wallet and be a part of this change and battle for peace and freedom, you can start right here. DASH is already accepted by vendors all across the world so you can begin using it immediately. The future is here, now it’s up to us to light the brushfires.

TLB republished this article from the Free Thought Project with our appreciation for the availability.

Matt Agorist is an honorably discharged veteran of the USMC and former intelligence operator directly tasked by the NSA. This prior experience gives him unique insight into the world of government corruption and the American police state. Agorist has been an independent journalist for over a decade and has been featured on mainstream networks around the world. Agorist is also the Editor at Large at the Free Thought Project. Follow @MattAgorist on Twitter,Steemit, and now on Facebook.