Facebook In Turmoil: Employees In Uproar Over Executive’s Leaked Memo

Facebook’s problems are just getting worse, and now investors can add worker morale to the (bucket) list of problems as the New York Times reports that employees furious over a leaked 2016 memo from a top executive seeking to justify the company’s relentless growth and “questionable” data harvesting – even if it led to terrorists attacks organized on the platform.

VP Andrew “Boz” Bosworth – one of Facebook CEO Mark Zuckerberg’s most trusted executives, wrote that connecting people is the greater good even if it “costs someone a life by exposing someone to bullies.

“Maybe someone dies in a terrorist attack coordinated on our tools.”

On Friday, the fallout from Bosworth’s leaked memo – following several weeks of outrage over the company’s data harvesting practices, has Facebook employees in an uproar, according to The Times.

According to two Facebook employees, workers have been calling on internal message boards for a hunt to find those who leak to the media. Some have questioned whether Facebook has been transparent enough with its users and with journalists, said the employees, who asked not to be identified for fear of retaliation. Many are also concerned over what might leak next and are deleting old comments or messages that might come across as controversial or newsworthy, they said. –NYT

One former Facebook employee, Alex Muffett, wrote on Twitter that Bosworth’s memo was a “significant” part of his decision to leave the company.

“Between overwork and leadership direction evidenced thusly, I could never stay,” wrote Muffett.

Backplot: my “goodbye” posting to Facebook was in significant part in response to this work by @boztank, and subsequently garnered considerable support from Facebook’s under-represented Engineering community, who genuinely do care about user privacy: https://www.buzzfeed.com/ryanmac/growth-at-any-cost-top-facebook-executive-defended-data …

Facebook Executive In 2016: “Maybe Someone Dies In A Terrorist Attack Coordinated On Our Tools” 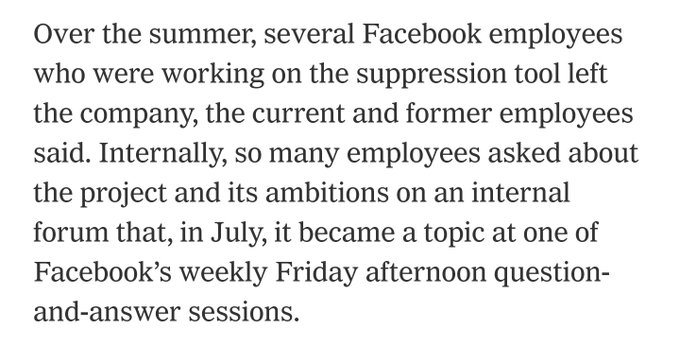 It was kinda bittersweet to see @MikeIsaac referring to my essay slightly, here: http://mobile.nytimes.com/2016/11/22/technology/facebook-censorship-tool-china.amp.html …

This was all — to my considerable surprise — broken by @MikeIsaac in late 2016 (see attached) — I still don’t know who else left apparently the company regarding this work, but if they held their hand up thusly, they have my admiration. https://www.nytimes.com/2016/11/22/technology/facebook-censorship-tool-china.html …

Facebook Said to Create Censorship Tool to Get Back Into China

The social network, blocked in China since 2009, has developed software to keep posts from appearing in users’ news feeds in specific geographic areas, current and former employees said.

“There are some amazing engineers working at Facebook, folks who care deeply about user privacy, security, and how people will use the code that they write,” Mr. Muffett said later in a message. “Alas this episode may not help” to achieve more transparent internal product discussion, he said.

Following Buzzfeed’s Thursday’s publication of the “growth at any cost” leak, BuzzFeed reporter Ryan Mac suggested Facebook was censoring the article – tweeting “Interesting that only about 14k views (about 2% of total) for our story have come through Facebook referrals. Facebook’s users should be aware of this, so feel free to share it on Facebook.”

Interesting that only about 14k views (about 2% of total) for our story have come through Facebook referrals. Facebook’s users should be aware of this, so feel free to share it on Facebook.https://www.buzzfeed.com/ryanmac/growth-at-any-cost-top-facebook-executive-defended-data …

Facebook Executive In 2016: “Maybe Someone Dies In A Terrorist Attack Coordinated On Our Tools”

When Vox‘s Matthew Yglesias chimed in to corroborate Mac’s observation, Facebook head of news feed Adam Mosseri chimed in to say that the social media giant “100% do not take any action on stories for being critical of us.

I experienced this too.

Facebook appears to throttle traffic to anti-Facebook stories which is I guess what I would do if I controlled the platform and fundamentally didn’t believe in editorial values or civic virtue. https://twitter.com/RMac18/status/979741459497680896 …

We 100% do not take any action on stories for being critical of us.

Mark Zuckerberg responded to Bosworth’s letter in a statement essentially disavowing the Boz, while also noting that Facebook changed their entire corporate focus to connect people and “bring them together”…

Boz is a talented leader who says many provocative things. This was one that most people at Facebook including myself disagreed with strongly. We’ve never believed the ends justify the means.

We recognize that connecting people isn’t enough by itself. We also need to work to bring people closer together. We changed our whole mission and company focus to reflect this last year.

Meanwhile, Facebook is rapidly becoming radioactive, inside and out.

The question is when will investors – and especially hedge funds, for whom FB was the second most popular stock as of Dec. 31 – agree, and do what Mark Zuckerberg has been aggressively doing in recent weeks: dump it.

TLB published this article by Tyler Durden from ZeroHedge with our thanks for the coverage.