ER Editor: we also recommend today’s report from Zerohedge on this topic – Facebook Purges Over 800 Accounts With Millions Of Followers; Prominent Conservatives Vanish.

Facebook purges hundreds of political pages, some alt-media with millions of followers

Facebook is again being called out for purging political accounts too far left and right of center, after it removed more than 800 pages just in time for the 2018 midterm elections. Some had millions of followers.

Many of the affected pages were supposedly sharing links between groups using fake accounts, which then clicked “Like” on the posts, artificially upping their engagement numbers. This “inauthentic behavior” violates Facebook’s anti-spam policies and goes against “what people expect” from Facebook, the company said. 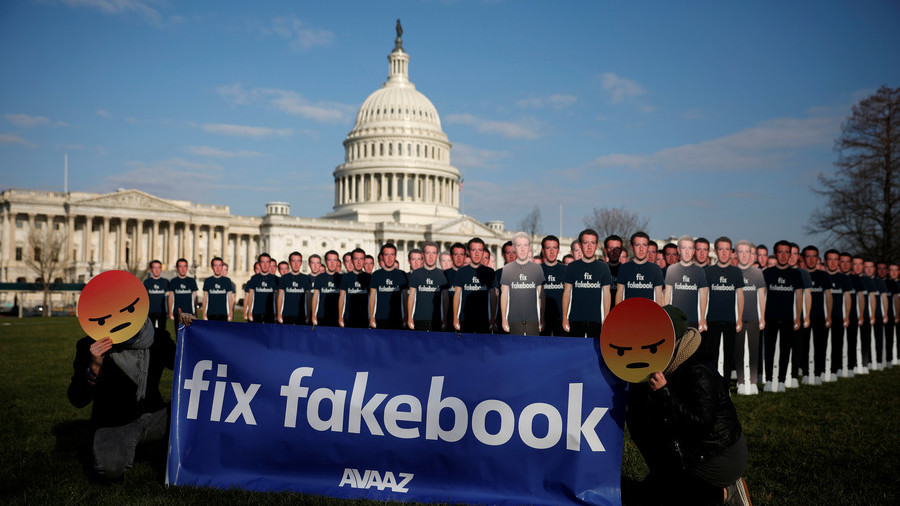 While some of the deleted pages have been known to run content of questionable credibility at times, Facebook did not expressly accuse them of spreading “fake news” – or actually provide a list of names or examples of postings at all. However, under the platform’s new policies, simply spreading “news” is frowned upon: it has recently tweaked its algorithm to prevent users’ feeds from being dominated by news stories.

Twitter was in an uproar as many voices on the left and right alike saw their pages removed without cause.

On the Left, AntiMedia, with its 2.1 milion followers, and the Free Thought Project with 3.1, were among the victims. AntiMedia’s Twitter account was suspended shortly after they posted about their removal from Facebook.

After 5 years of building fans Facebook has officially unpublished our page (3.1 million fans) so we can’t post on it anymore. This is truly an outrage and we are devastated. We will do everything we can to recover our page and fight back. pic.twitter.com/H3AmHTT8Qo

Press For Truth was also dropped. 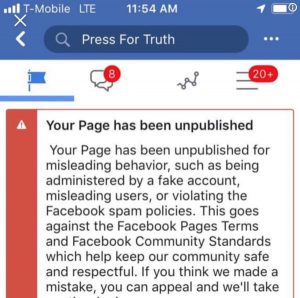 Right Wing News (more than 3.1 million followers) and Nation In Distress (also over 3mn followers) were some of the conservative pages that got the axe.

Among those dragged under in the ‘inauthentic behavior’ purge is RT America correspondent Rachel Blevins, who says she took years to build up a following by posting her reports and articles – though RT content is probably not very popular with Facebook staff these days. 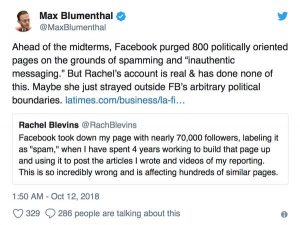 In August, the aggressively pro-NATO think tank Atlantic Council announced it was joining Facebook as a “fact-checking” partner. A press statement from the social media platform gushed that the think tank, which boasts such esteemed warmongers as Henry Kissinger and Michael Chertoff on its board, would serve as the “eyes and ears” of Facebook, so the platform could play a “positive role” in ensuring democracy was practiced correctly in the future.

In the recent months, accounts that post anti-establishment political content have noticed a massive drop in engagement on their posts – if they haven’t been kicked off the platform altogether. In August, Facebook deleted 652 accounts after cybersecurity firm FireEye claimed they were linked to Iran.

After it emerged that political research firm Cambridge Analytica had used publicly-available user data to target possible Trump voters, CEO Mark Zuckerberg dismissed the idea that social media manipulation played a significant role in the 2016 US presidential election. Since then, however, the company has been playing catch-up, trying to preempt government regulation by banning and blocking any user who deviates from an increasingly narrow centrism.

Remembering the days when Facebook was all about cat videos and clickbaity headlines, one cannot help but link the sense of social responsibility it’s suddenly developing to how US lawmakers have set their sights on social media platforms. In April, Zuckerberg had to endure House and Senate hearings, taking cringe-worthy questions from politicians who, at the time, seemed to barely know what a social network is and how it works.

Meanwhile, mainstream media fearmongering is already kicking in. The New York Times – an outlet Facebook is unlikely to delist for posting misleading content anytime soon – has cited “experts” to accuse these domestic US pages of “emulating the Russian strategy of 2016” by creating and amplifying clickbait.

Featured image courtesy of Dan Dicks at Press For Truth, one of the censored news sites

US Paranoia Ramps Up Information War On Russia