FILE PHOTO: U.S. Secretary of State Colin Powell holds up a vial that he described as one that could contain anthrax © Ray Stubblebine / Reuters

Use of the term ‘false flag’ is often met with raised eyebrows and accusations of conspiracism. But false flags are a very real and very present feature of geopolitics — and denying that is simply denying reality.

Last week, the United States, along with the United Kingdom and France, bombed Syrian government targets, ostensibly in retaliation for an alleged chemical attack which was carried out one week before in the city of Douma.

The story we’re told is simple: Syrian President Bashar Assad is an evil maniac who uses poison gas on his citizens for the sheer entertainment value. As neocon think tank the Atlantic Council put it last week, when Assad gasses people, he is simply “indulging an addiction” — an addiction which he seems to have only recently acquired, given the fact that before Syria’s war began, American journalists were busy praising the “educated” and “informed” Assad and marveling at the “phenomenal” levels of peace and religious diversity within Syria.

In 2006 Diane Sawyer praised Assad during a trip to Syria for the “phenomenal” levels of religious tolerance and peace in Syria. Funny how he turned into a monster at the exact moment Washington decided it was time for regime change. https://youtu.be/lpN8zp3oHc8?t=2

Anyway, so intense is Assad’s newfound desire for watching Syrian babies foaming at the mouth, that he is willing to snatch defeat from the jaws of victory by deciding to use these weapons despite knowing it would provoke worldwide outrage and potentially a major US military effort to oust him. So, that’s the story. Assad is a monster and the world must unite to stop him.

There are plenty of people who are less than convinced by this narrative, however. One of them is Peter Ford, the former British ambassador to Syria. Ford told BBC Radio Scotland that “in all probability” the alleged chemical attack never happened and that the video and image evidence used as proof by the US and its allies was falsified. There are others who believe that the attack could have been real, but that the perpetrators were anti-Assad rebels trying to provoke fresh military action from the US — in other words, it was very possibly a false flag event which served its purpose perfectly.

One of the best questions to ask when something like this happens, is: Who benefits? Very clearly in this case, Assad has not benefited at all, but the rebel groups fighting against him have.

Whatever the truth about this alleged chemical attack, the notion of false flag events being used to prompt military action should not be met with such skepticism. The US has a long history of using lies (or ‘fake news’ you might call it) as a pretext for war. It is important to look at recent events in Syria within that context.

Perhaps the most famous of all examples was the heart-wrenching testimony to Congress of a 15-year-old Kuwaiti girl, identified only as Nayirah, which was used to sell the first Gulf War to the American people in October 1990. An emotional Nayirah told the Congressional Human Rights Caucus that she had witnessed Iraqi soldiers taking babies out of incubators and leaving them on the floor to die.

What Americans did not know, was that Nayirah was the daughter of the Kuwaiti ambassador to the US and she had been coached by the American PR firm Hill and Knowlton. But before the details of the stunt and false testimony became widely known, it had already been used to sell America’s war against Iraq in 1991. 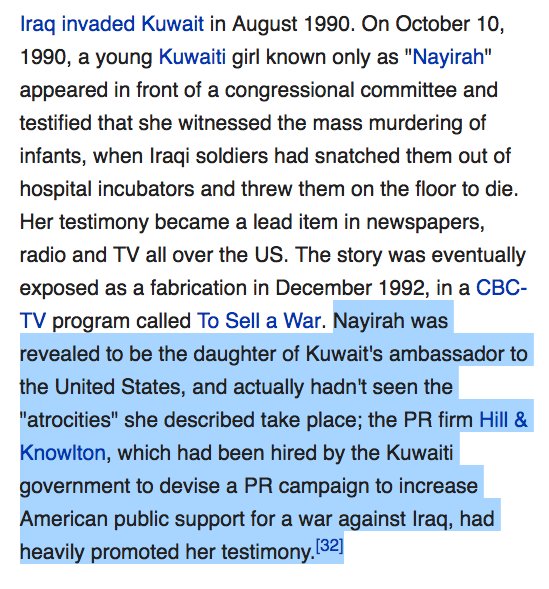 In 1990 young Nayirah told of seeing Iraqi soldiers pull Kuwaiti babies out of incubators. Today our delivery of atrocity propaganda is more sophisticated, yet public credulity remains about the same.

In the 1960s, American military leaders devised plans to bomb US cities and blame Cuban leader Fidel Castro in order to manufacture public and international support for a war.

The plan was codenamed Operation Northwoods and what it advocated was nothing short of horrendous. The American military suggested sinking boatloads of Cuban refugees, hijacking planes and bombing Miami. The goal was to convince Americans that Castro had unleashed a reign of terror upon them.

The top brass were even willing to cause US military casualties by blowing up an American boat in Guantanamo Bay and blaming Cuba. Why? Because, as they put it, “casualty lists in US newspapers would cause a helpful wave of national indignation” and help manufacture support for war. The plans were quashed by President John F. Kennedy, who was assassinated one year later, leading some to speculate on a link between those events.

Top US officials also distorted the facts in the lead-up to the Vietnam War and the media dutifully reported the official narrative as absolute fact, helping launch perhaps the most disastrous war in America’s history.

On August 2, 1964, North Vietnamese torpedo boats attack the USS ‘Maddox’ while it was on “routine patrol” in international waters in the Gulf of Tonkin. Two days later, the US Navy reported a second “unprovoked” attack on the ‘Maddox’ and the USS ‘Turner Joy’ — a second destroyer which had been sent in after the first attack. President Lyndon B. Johnson told the American people on TV that “repeated acts of violence” against the US ships must be met with a strong response. Soon after Johnson appeared on TV, Congress passed the Gulf of Tonkin Resolution, which pre-approved any military action that he would take from that moment on.

The only problem was, there was no second attack on the US ships at all — and the allegation that the first attack had been “unprovoked” was also a lie. In reality, the USS ‘Maddox’ had been gathering intelligence and providing it to South Vietnamese boats which were attacking North Vietnam. As for the second attack, the US boats had misinterpreted radio signals and radar images and spent two hours firing at nothing. Nonetheless, the “attack” was used to convince the American people to support war.

3. Given the folly of the British government over Iraq and Libya, and its undoubted misleading of the public over Iraq, it is perfectly reasonable to suspect it of doing the same thing again. Some of us also do not forget the blatant lying over Suez, and indeed the Gulf of Tonkin https://twitter.com/thestarwormwood/status/984467049220067331 …

Recently declassified documents show yet more American false flag plotting, this time against the Soviet Union. A three-page memo, written by members of the National Security Council, suggested that the US government should acquire Soviet aircraft which would be used to stage attacks and provide the pretext for war.

Such aircraft, the memo said, “could be used in a deception operation designed to confuse enemy planes in the air, to launch a surprise attack against enemy installations or in a provocation operation in which Soviet aircraft would appear to attack US or friendly installations to provide an excuse for US intervention.”

The government even considered producing the soviet planes domestically in a massive covert operation. They went so far as to acquire estimates from the Air Force on the cost and length of time such an operation would take.

In a memo of undisclosed date, the US National Security Council suggested the government should either buy or covertly produce Soviet aircraft and use them to launch fake attacks, providing pretext for war https://www.archives.gov/files/research/jfk/releases/docid-32977055.pdf …

This is by no means an exhaustive list. Is there even any need to rehash the lies which were told in the lead-up to the Iraq war? The media here again swallowed the government’s lies, one by one — and 15 years later, the region is still suffering the consequences and very few lessons appear to have been learned.

These are not conspiracy theories. They are cold, hard evidence that the US has no qualms whatsoever about using false flag events and fake evidence to provide pretext for military action.

Continued lack of critical inquiry from the media, given the severe potential consequences of escalating the conflict in Syria, is tantamount to a crime.

(TLB) published this op-ed article by Danielle Ryan from RT with our appreciation for this perspective.

Danielle Ryan is an Irish freelance journalist. Having lived and worked in the US, Germany and Russia, she is currently based in Budapest, Hungary. Her work has been featured by Salon, The Nation, Rethinking Russia, Russia Direct, teleSUR, The BRICS Post and others. Follow her on Twitter @DanielleRyanJ, check out her Facebook page, or visit her website: danielle-ryan.com