Quite a bit of FBI-related news broke late Friday;

A newly unredacted version of the House Intelligence Committee’s final report on Russia was released on Friday [link for report below], containing bombshell revelations stemming from the Congressional testimony of former FBI and DOJ officials Andrew McCabe and James Comey.

For starters, the redacted section of the report covers up the fact that former deputy director Andrew McCabe told Congressional investigators the FBI had virtually no case against former National Security Advisor Mike Flynn.

McCabe also says that former FBI Director James Comey spearheaded the “ambush” of Flynn at the White House – in which two FBI agents, one of whom was Peter Strzok dropped in unannounced to interrogate him.

McCabe told the committee that “The two people who interviewed [Flynn] didn’t think he was lying[.]” as well as “[N]ot [a] great beginning of a false statement case.”

“Deputy Director McCabe confirmed the interviewing agent’s initial impression and stated that the ‘conundrum that we faced on their return from the interview is that although [the agents] didn’t detect deception in the statements that he made in the interview … the statements were inconsistent with our understanding of the conversation that he had actually had with the ambassador,’” the report states.

Compare these two pages. The initial redacted version hid clear testimony that the FBI didn’t think Flynn lied. McCabe: “The two people who interviewed [Flynn] didn’t think he was lying[.]” And: “[N]ot [a] great beginning of a false statement case[.]”

Next, we learn that Comey lied (or had a terrible lapse in memory) when he told Fox News host Bret Baier that he didn’t tell Congressional investigators what McCabe told them; that the two FBI agents who interviewed former National Security Advisor Mike Flynn didn’t think he was lying to them.

“Director Comey testified to the Committee that ‘the agents…discerned no physical indications of deception,” reads the new report. “They didn’t see any change in posture, in tone, in inflection, in eye contact. They saw nothing that indicated to them that he knew he was lying to them.”

Comey: No. And I saw that in the media. I don’t know what – maybe someone misunderstood something I said. I didn’t believe that, and didn’t say that. 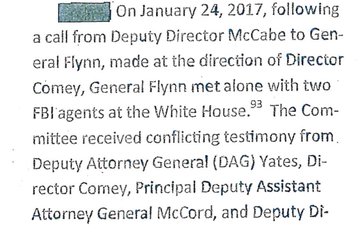 As Sean Davis of The Federalist notes, the DOJ and FBI “demanded significant redactions to the document not to protect national security or sources and methods, but to protect potentially corrupt officials from accountability”

Sean Davis✔@seanmdav
Replying to @seanmdav
It’s clear that DOJ/FBI demanded significant redactions not to protect national security or sources/methods, but to protect potentially corrupt officials from accountability for their actions before and after Trump’s election.

The Flynn redactions appear to have been done to protect a false statements case with no evidentiary basis. Others were done to hide apparent conspiracy to spy on and leak against Trump officials out of spite over the election results.

In one section, initially redacted material suggests an investigation against Flynn that, per Comey, should have been closed was kept open because he may have *thwarted* Obama admin plans to provoke Russia into disproportionately attxkinf the U.S.

House Intel Committee Chairman Devin Nunes (R-CA) weighed in, pointing out to Fox News‘s Laura Ingraham that his committee had “been fighting with the Department of Justice and the FBI, for six weeks, to release this information to the American people.”

It took the DOJ and the FBI 6 weeks to lift redactions on 2 pages of the Russia report. What info was initially redacted? Comey & McCabe saying that agents did not believe Flynn was lying. @DevinNunes explains. See Pg 53 & 54 of Russia report https://intelligence.house.gov/uploadedfiles/final_russia_investigation_report.pdf …

Flynn, who has been cooperating with Mueller’s investigation, was forced to resign as Trump’s National Security Advisor last February after pleading guilty to lying to the FBI about perfectly legal and to-be-expected conversations he had with Russian ambassador Sergey Kislyak during the transition.

So why would Flynn plead guilty?

Some have suggested that Flynn pleaded guilty due to the fact that federal investigations tend to bankrupt people who aren’t filthy rich – as was the case with former Trump campaign aide Michael Caputo, who told the Senate Intelligence Committee “God damn you to hell” after having to sell his home due to mounting legal fees over the inquiry.

“Your investigation and others into the allegations of Trump campaign collusion with Russia are costing my family a great deal of money — more than $125,000 — and making a visceral impact on my children.”

Thus, it’s entirely possible Flynn pleaded guilty in order to avoid financial ruin – though like Caputo, he didn’t escape having to sell his house in March.

@mflynnJR
Is it not possible he just plead guilty because of the financial burden it created and is creating on our family??
Renato Mariotti✔@renato_mariotti

But when he pleaded guilty, your father admitted under oath that he lied to the FBI about his conversations with Russian Ambassador Kislyak. https://twitter.com/mflynnjr/status/988429093866786817 …

Another thought is that the FBI simply called Flynn’s bluff and said they caught him in a lie. While perhaps a stretch at this point and certainly unconfirmed, some have suggested that Andrew McCabe instructed Peter Strzok and the other FBI agent who interviewed Flynn to alter their “302” forms – the document FBI investigators use to document an interview.

Investigative journalist Sara Carter has reported that FBI sources maintain the FBI’s deputy director under Comey, Andrew G. McCabe, may have asked FBI agents to alter or change their findings in their 302s; Carter alleges that OIG Inspector General Michael Horowitz is looking into this. –The Hill

So we know that innocent people plead guilty all the time, and that Flynn faced significant financial pressure were he to remain in the Trump administration and fight the claims against him. Also recall that during December 2016, when Flynn spoke with the Russian ambassador,the Russiagate narrative was in a full frenzy. It’s possible that although Flynn and Kislyak’s contact was perfectly legal and to-be expected, he may have been hesitant to tell the FBI about some or all of his communications out of an abundance of caution. It should also be noted that Flynn may have considered the obviously pro-Clinton top brass of the US intelligence community to be “the enemy” and been hesitant to tell them the full truth.

Until we know more, we can only speculate.

Two top Comey advisors announced their departure from the FBI on Friday, leading to speculation that some bad information is about to come out regarding the pair.

Resignations were handed in by James Baker – former top lawyer for the NSA specializing in FISA matters before becoming the FBI’s top lawyer, and lawyer Lisa Page – one of the two “lovebirds” who sent anti-Trump text messages with her co-worker with whom she was having an extramarital affair – special agent Peter Strzok (who spearheaded the Clinton email investigation, the early Trump investigation and interviewed Mike Flynn).

Mollie Hemmingway of The Federalist notes that Page and Baker quit as a highly anticipated report by the DOJ’s Inspector General is “looming,” suggesting that the report will reveal violations of the law egregious enough to call for both of them to hand in their resignations on the same day.

NameRedacted8@nameredacted8
Baker was NSA Gen Counsel specializing in FISA matters. After you hired him, the @FBI engaged in a palace coup attempting to rig a presidential election, then overthrow a President via FISC abuse. Baker was instrumental. You’re both going to prison.
James Comey✔@Comey
A great public servant retired from the FBI today. Jim Baker’s integrity and commitment to the rule of law have benefitted our country through 5 presidents, of both parties. We are fortunate he and so many others choose to devote their lives to justice.

And, oddly, James Comey forgot to mention Page’s name when he was praising Baker on Friday night:

A great public servant retired from the FBI today. Jim Baker’s integrity and commitment to the rule of law have benefitted our country through 5 presidents, of both parties. We are fortunate he and so many others choose to devote their lives to justice.

Perhaps Page and Baker can set up legal defense funds like Andy McCabe and convince people to give them a half-million dollars to cover upcoming expenses.

(TLB) published this report by  Tyler Durden  from ZeroHedge with our thanks for the coverage.